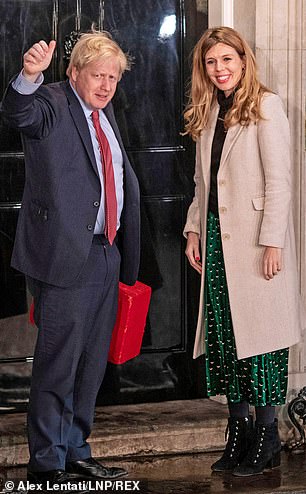 Nobody would live there by choice. Premiers are forced to dwell in it by stone-faced security chiefs who insist they cannot protect them if they live anywhere else. The Prime Minister and Carrie Symonds are pictured outside Downing Street after the 2019 election

Over many years I have learned to despise most politicians. I’m not here to defend any of them.

They are, for the most part, shallow careerists, ignorant of history, utterly uninterested in facts and clueless about the results of their actions. I really have no sympathy with them, and listen with despair to their dim speeches and interviews.

Most of those who report their doings (with some honourable exceptions) are much like them.

Politics is portrayed as showbusiness for ugly people, tedious gossip about who is up or down, in or out.

But honestly, this last week’s stuff about Boris Johnson was exceptionally wretched.

Remember, the politicians and media who have flung themselves on this story with energy and glee were mainly silent and supine about the recent huge assault on Parliament, on personal liberty and on our economy.

Yet here they are, going on and on about the wallpaper and the furniture in the Prime Minister’s flat in Downing Street.

I have never visited this place, but I know people who have and I am told it is not especially nice.

Nobody would live there by choice. Premiers are forced to dwell in it by stone-faced security chiefs who insist they cannot protect them if they live anywhere else.

So I’d be quite happy if some of my taxes (so much of them already wasted on really bad things) went on making it reasonably comfortable. And if that means paying someone called Lulu a bit over the odds for the wallpaper, I really do not mind.

Actually, a state allowance would be much better than putting the Queen’s First Minister in the hands of donors, the curse of politics who will always want something in return for their generosity.

As for whether Johnson said that thing about piles of bodies, it is of course interesting, but can we think about it for just a moment? 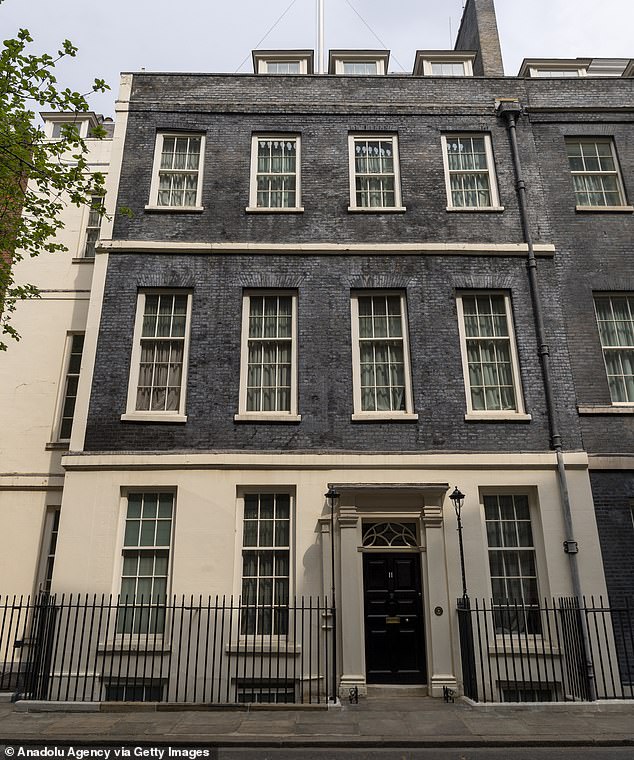 I have never visited this place, but I know people who have and I am told it is not especially nice

We all say things in private that we would not say in public, especially when we are tired and angry.

Prime Ministers are entitled to assume that those who work closely with them have, in the American phrase, ‘come inside’ – that is, they have exchanged their freedom to blab for access to real power.

No serious organisation could work without such a rule.

Do we actually want surveillance and disclosure of everything our leaders say in private? Think hard about that before you say that you would.

It is a weary thing to have to say this again, but most of the few truly distinguished people who have headed the Government of this country would have been destroyed if the media of the time had told the world what they were really like –their private opinions, their sex lives or their financial secrets – including the one who everybody admires, Winston Churchill. 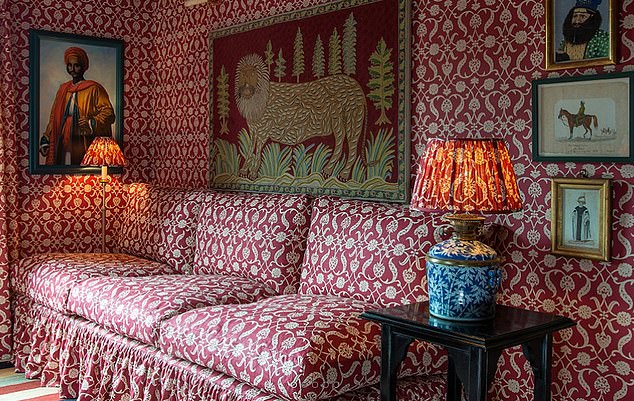 I’d be quite happy if some of my taxes (so much of them already wasted on really bad things) went on making it reasonably comfortable. And if that means paying someone called Lulu a bit over the odds for the wallpaper, I really do not mind

The BBC’s propaganda soap opera, Call The Midwife, is now a ceaseless megaphone for liberal causes. Last week it ventured for the third time into the topic of abortion.

Nurse Trixie, played by Helen George, pictured right, has been working in an expensive private clinic and discovered abortions are going on undercover. 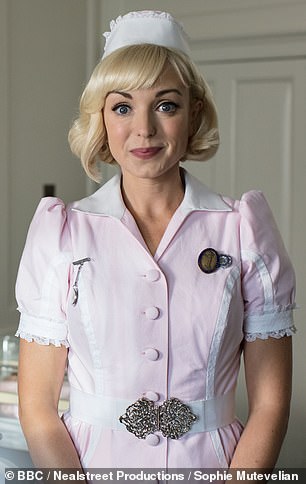 Nurse Trixie, played by Helen George, pictured, has been working in an expensive private clinic and discovered abortions are going on undercover

She reports this to the nuns of Nonnatus House, who – being opposed to abortion, as nuns generally are – are shocked and abandon plans to collaborate with the clinic.

Yet in past episodes, an unrestrained case has been made for abortion, with the soap concentrating on the plight of the mother involved, showing a gruesome backstreet abortion in February 2013, and then another – this time fatal to the mother – in February 2019.

This was the cue for pro-abortion speeches by characters in the programme, but not a word against them, despite all the nuns in the cast.

This is odd. But perhaps the reason for it is that campaigners for abortion in this country have always liked to hide the fact that it was legal – under strict rules – before they got their way in 1967.

They don’t like the idea we might have settled on a more limited relaxation of the law, rather than the annual disposal of more than 200,000 unborn babies, often on dubious grounds, that we have now.

There are believed to have been 1,600 ‘therapeutic’ abortions in NHS hospitals as early as 1958, and 2,800 in 1962. More were unrecorded in private hospitals. Some researchers think there were as many as 21,400 legal abortions in England and Wales in 1966, the year Call The Midwife has now reached.

I think anything that touches on this neglected truth is unwelcome to the abortion industry and its supporters in the media.

The horror story buried in a pile of psychobabble

Reading the official report on the case of Jonty Bravery, who cruelly hurled a small child from the top of the Tate Modern, with terrible effects, makes my blood boil.

Amid all the psychobabble and jargon (the report even refuses to use Bravery’s real name, though his identity is obvious) is the story of someone so dangerous that he simply should not have been free to commit his terrible crime.

A school fellow so badly hurt that the injury ‘could have been life-threatening’. Bravery biting a child and saying he ‘needed to see that he had drawn blood to satisfy his need to harm that child’. Bravery attacking a staff member at a residential home with a brick, where staff then called the police because they were afraid of trying to take the brick from him. Bravery assaulting a police officer.

By the way, he was taking unspecified ‘medication’ and there is the usual lack of curiosity about how he might have become so deranged in the first place, though I’m assured there’s no evidence of illegal drugs. The conclusion: apparently there’s ‘a shortage of specialist community provision’, among other bureaucratic waffle.

No, there’s a shortage of common sense, rapidly becoming tragic.

Isn’t it interesting how certain countries, normally barely mentioned, suddenly get huge prominence on the BBC?

For months the Corporation reported on Covid figures from Brazil almost every day, somehow failing to mention that it is the sixth most populous country on Earth – an important context for those statistics.

Nor did they compare it with Peru, which locked down hard where Brazil did not. Yet, at the last count, the two countries had almost exactly the same number of Covid deaths per million – Brazil 1,900, Peru 1,868. The comparable figure for the UK is 1,903. By the way, the Czech Republic, one of the first countries to close its borders and the first in Europe to mandate face coverings, is way above us in this dismal chart, at 2,737 Covid deaths per million.

Now it is the turn of India. Once again, when citing figures, little effort is made to point out that India has a population of almost 1.4 billion. This is more than 20 times the size of ours, now approaching 68 million.

But unlike equally vast China, India has a democracy and a free press so cannot hide its problems the way the Peking police state does. Who really knows what is going on in China?

Under normal circumstances, roughly 26,500 Indian citizens die every day from all causes (the equivalent here is 1,700).

Its health service, by common consent, has always been way behind ours. This – though distressing given India’s rising wealth – is nothing new.

We should all be deeply sympathetic to India’s undoubted losses, and do all we can to help a great and suffering country to which we are so closely bound by history. But the use of that tragedy to rekindle panic here is wrong.