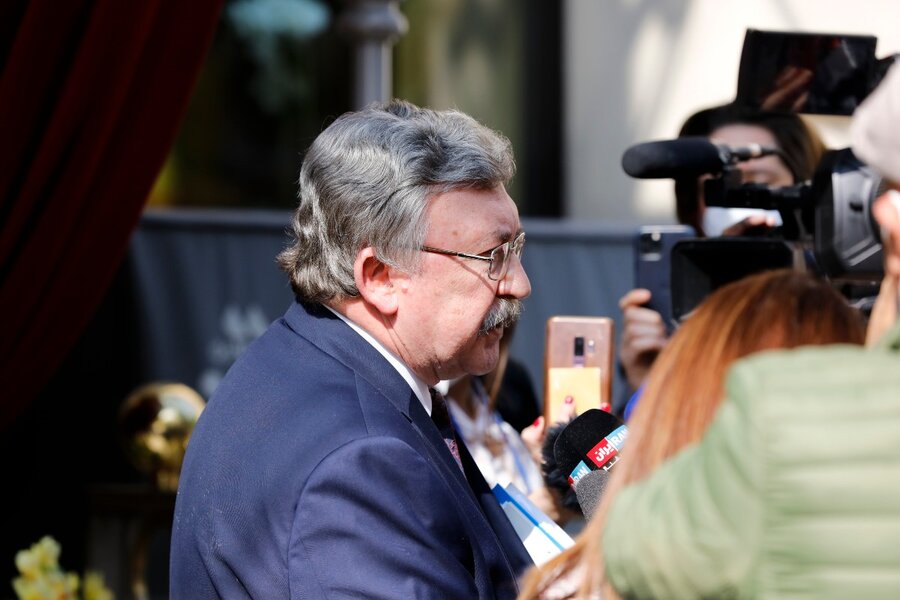 High-ranking diplomats from China, Germany, France, Russia and Britain made progress at talks Saturday focused on bringing the United States back into their landmark nuclear deal with Iran, but said they need more work and time to bring about a future agreement.

After the meeting, Russia’s top representative, Mikhail Ulyanov, tweeted that members of the Joint Comprehensive Plan of Action, or JCPOA, “noted today the indisputable progress made at the Vienna talks on restoration of the nuclear deal.”

“The Joint Commission will reconvene at the end of the next week,” Ulyanov wrote. “In the meantime, experts will continue to draft elements of future agreement.”

“It’s too early to be excited, but we have reasons for cautious and growing optimism,” he added. “There is no deadline, but participants aim at successful completion of the talks in approximately 3 weeks.”

“We have much work and little time left. Against that background, we would have hoped for more progress this week,” the senior diplomats said talking on condition of anonymity because they were not authorized to be publicly named.

“We have yet to come to an understanding on the most critical points. Success is by no means guaranteed, but not impossible.”

In Washington, the U.S. State Department had no immediate comment on reports of progress, incremental or not, and said the U.S. assessment of the talks remained where it was on Thursday. On that day, State Department spokesman Ned Price said there had been some movement but that an agreement was far from done or even guaranteed.

Iran’s chief nuclear negotiator said on Saturday Tehran expects U.S. sanctions on oil, banks and most individuals and institutions to be lifted based on agreements so far in Vienna talks. “Sanctions … on Iran’s energy sector, which include oil and gas, or those on the automotive industry, financial, banking and port sanctions, all should be lifted based on agreements reached so far,” Deputy Foreign Minister Abbas Araqchi was quoted as saying by Iranian state media, Reuters reported.

“I can say that now our discussions have reached a maturity, both in the disputed topics and in the sections that we are agreed on,” he told Iranian state TV. “Although we cannot yet fully predict when and how we will be able to reach an agreement, it is moving forward, although slowly.”

The U.S. did not have a representative at the table when the diplomats met in Vienna because former President Donald Trump unilaterally pulled the country out of the deal in 2018. Trump also restored and augmented sanctions to try to force Iran into renegotiating the pact with more concessions.

U.S. President Joe Biden wants to rejoin the deal, however, and a U.S. delegation in Vienna was taking part in indirect talks with Iran, with diplomats from the other world powers acting as go-betweens.

The Biden administration is considering a rollback of some of the most stringent Trump-era sanctions in a bid to get Iran to come back into compliance with the nuclear agreement, according current and former U.S. officials and others familiar with the matter.

Ulyanov said JCPOA members met on the side with officials from the U.S. delegation but the Iranian delegation was not ready to meet with U.S. diplomats.

The nuclear deal promised Iran economic incentives in exchange for curbs on its nuclear program. The reimposition of U.S. sanctions has left the Islamic Republic’s economy reeling. Tehran has responded by steadily increasing its violations of the deal, such as increasing the purity of uranium it enriches and its stockpiles, in a thus-far unsuccessful effort to pressure the other countries to provide relief from the sanctions.

The ultimate goal of the deal is to prevent Iran from developing a nuclear bomb, something it insists it doesn’t want to do. Iran now has enough enriched uranium to make a bomb, but nowhere near the amount it had before the nuclear deal was signed.

The Vienna talks began in early April and have included several rounds of high-level discussions. Expert groups also have been working on how to resolve the issues around the American sanctions and Iranian compliance, as well as the “possible sequencing” of the U.S. return.

Outside the talks in Vienna, other challenges remain.

An attack suspected to have been carried out by Israel recently struck Iran’s Natanz nuclear site, causing an unknown amount of damage. Tehran retaliated by beginning to enrich a small amount of uranium up to 60% purity, its highest level ever.

Grieshaber reported from Berlin. Amir Vahdat in Tehran, Iran, and Matt Lee in Washington contributed to this report.