Winning the Champions League offered Liverpool a chance of salvation in an awful season that has seen them hand over the Premier League title to Manchester City without a whimper.

European glory seemed unlikely though, given Jurgen Klopp’s defensive crisis, their lack of confidence in front of goal and a 3-1 aggregate deficit to overturn against Real Madrid.

But Wednesday night’s 0-0 draw with the Spanish giants saw them bow out of the competition at the quarter-final stage. Liverpool will end a season trophyless for the first time since 2017-18. 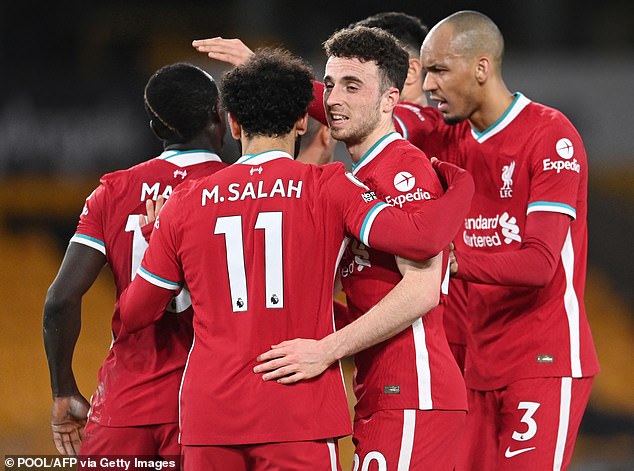 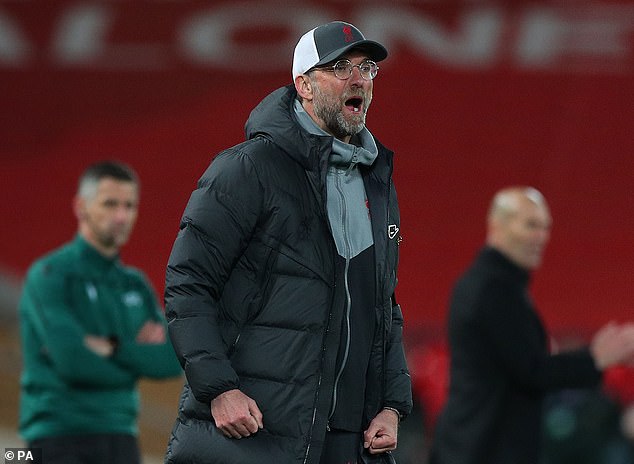 Liverpool will now have to do it the hard way. They pick up their push for a top-four spot away at Leeds on Monday night but there is plenty of cause for optimism, given their form has been on the up in recent weeks.

With seven games to go in the domestic season, the Reds are playing catch-up and need to overturn a four-point gap on third-placed Leicester and a three-point gap on fourth-placed West Ham.

Chelsea, two points ahead of Liverpool, are also within the hunting pack while Tottenham and Everton will believe they have an outside chance of squeezing into the top four as well.

When asked about his side’s top-four hopes after the game against Real, Klopp said: ‘I would say I am naturally confident, but that doesn’t mean we will end up there

‘We know who we play and we don’t have to talk too much about it. I said now what we think about it and, yes, we want and we have to – and if we want that we should play really good football.

‘I think we are not in a bad moment at the moment: we played pretty well even when it was a late winner against Aston Villa. We played a good game against them, we played really good against Arsenal. 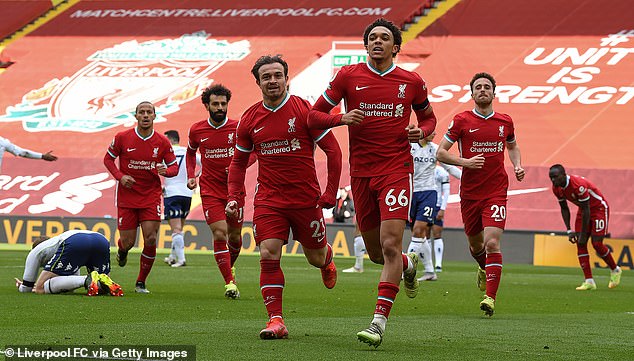 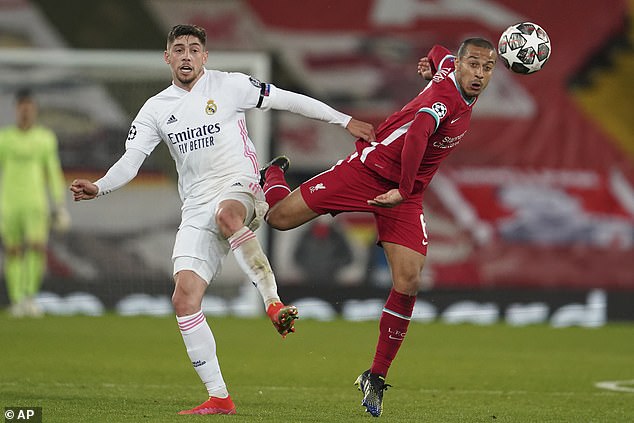 So Klopp is fully aware of the challenge facing his players in the coming weeks, although their recent league form does seem to have turned a corner.

Trent Alexander-Arnold’s late winner against Aston Villa last weekend finally brought Liverpool’s run of six consecutive home defeats to an end. The extent to which the Anfield fortress crumbled after Christmas was one of the most unusual aspects of Liverpool’s woes this season.

Injuries have certainly played their part but a worrying lack of creativity at home and the lack of composure to finish off the few chances they did create were notable in the losses to Fulham, Everton, Manchester City, Burnley, Brighton and Chelsea.

But the win over Villa halted that run and, after back-to-back away wins at Wolves and Arsenal, the Reds have won three Premier League games in a row to propel themselves back into top-four contention.

With seven games to go, Klopp might be grateful that they have to play four on the road and only three at home. Their run-in starts with a trip to Leeds on Monday, which promises to be a frantic contest between two of the league’s most daring sides.

Newcastle then come to Anfield and there can be no excuses for failing to win that game, given the disastrous run the Magpies find themselves on.

Liverpool then go to Old Trafford to take on Manchester United and an unexpected three points there would certainly be a morale booster to take into the final few weeks of the season.

The Reds then host Southampton before a pair of away games at West Brom and Burnley before concluding the campaign at home to Crystal Palace. 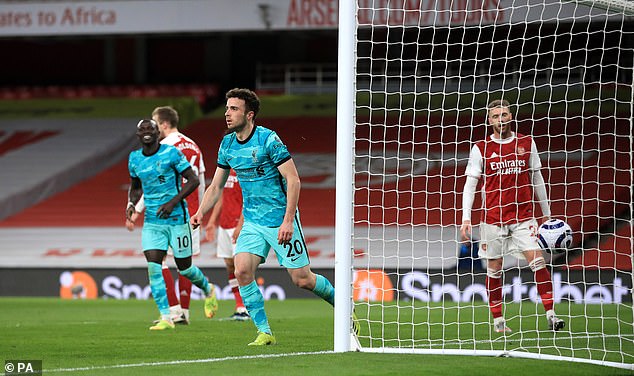 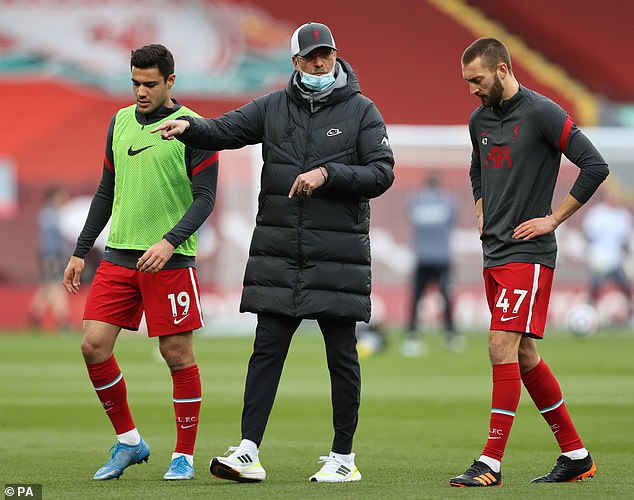 After a season of defensive issues, Ozan Kabak and Nat Phillips are forming a partnership

If Liverpool are within touching distance of the Champions League at kick-off in the Southampton game then they will back themselves to take maximum points from their final four games, especially with Chelsea and Leicester both having difficult fixtures to end the campaign.

It might seem harsh to say that securing Champions League football is imperative given the obstacles Liverpool have had to overcome this season but a place in Europe’s top competition is essential for the club in trying to bounce back.

It is thought Liverpool’s absence from the Champions League will cost the club at least £40million. That would be another devastating blow to the finances after 12 months of no matchday income and no chance of a lucrative pre-season tour this summer.

Money is desperately needed for investment into the first-team squad and owners Fenway Sports Group are smart but frivolous in the transfer market. Klopp has promised there will be no mass overhaul but he must know that there is a need for some change this summer.

It is expected a number of players will leave the club, including Georginio Wijnaldum, Divock Origi, Xherdan Shaqiri and Adrian, and that should free some up funds to invest elsewhere.

Reports have suggested talks are ongoing over a deal with RB Leipzig for defender Ibrahima Konate and that would be a welcome addition given the injury woes and the unreliability of Joel Matip and Joe Gomez in previous seasons. 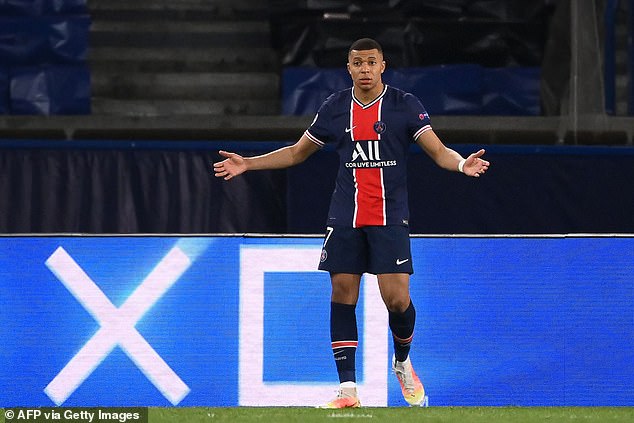 Ozan Kabak looks to be settling into life at Anfield and the option is there to make his loan move from Schalke permanent for £18m. Nat Phillips has surely done enough in recent months to warrant more game time, even when everyone is fit.

A midfielder will need to be brought in to replace Wijnaldum, who looks increasingly likely to leave on a free transfer when his contract expires this summer.

Naby Keita and Alex Oxlade-Chamberlain have both played peripheral roles this season and will want more minutes in future and it remains to be seen if Curtis Jones can push for a greater role after his breakthrough in recent months.

So perhaps the biggest need for investment can be found in attack.

Liverpool’s famed front three was bolstered by the arrival of Diogo Jota from Wolves last summer but it seems they need a traditional No 9, someone who can provide another regular source of goals.

Roberto Firmino has proven to be the ideal foil for Mohamed Salah and Sadio Mane in recent seasons but there is no denying he is not clinical enough.

A move for Kylian Mbappe or Erling Haaland looks beyond Liverpool’s reach and missing out on the Champions League would definitely make a deal for either impossible.

But Liverpool’s policy in the transfer market in recent seasons has been focused on targets at ‘smaller’ clubs who they can hone on Merseyside. Klopp has always said he’d rather develop a player than buy the finished article. 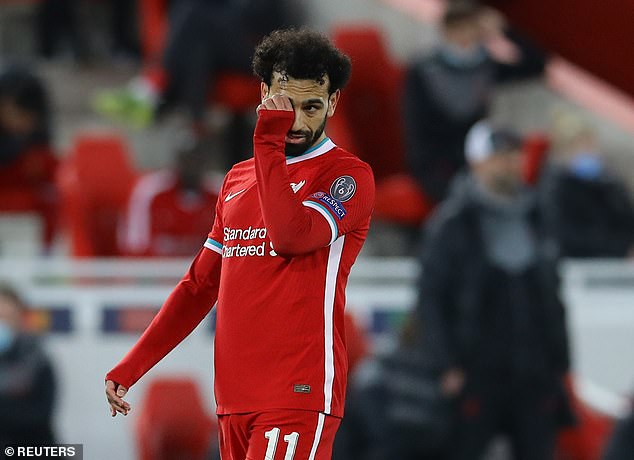 While securing Champions League football will benefit the Reds in bringing players in, it should also help them keep some of their star names at the club.

Salah continues to flirt with both Barcelona and Real Madrid in rogue interviews with Spanish newspapers and his relationship with the club seems to be slightly strained at the moment.

The Egyptian is not thought to want to pursue a move away but reports this week claimed the 28-year-old is ‘concerned’ that the club view his future differently and could now be ready to cash in on him.

Missing out on the top four may tempt Liverpool’s owners into cashing in on their prized asset, allowing them to generate funds to re-invest back into the squad.

But are they really likely to let their best goalscorer go if they do secure a Champions League finish and plot to take on Manchester City for the Premier League title again  next season? You’d think not.

This season has undoubtedly been nothing like the title defence Klopp had planned when he said they would ‘attack’ the league campaign after ending the club’s 30-year wait for domestic glory.

But finishing inside the top four from this position, and after all the obstacles they have had to overcome, would be the ideal ending to the season for Liverpool. It also seems absolutely vital to their hopes of challenging on all fronts again next season.