It takes an enormous effort to play every minute of every game in a normal Premier League season, let alone one that has been so congested because of the impact of the Covid-19 pandemic.

With matches scheduled for every three or four days, across multiple competitions for some, the risk of injury is high and fatigue seems inevitable as top-flight stars work through their gruelling schedules with almost no time to rest.

But, despite the obstacles, five outfield players in the Premier League have managed to be ever present for their respective teams so far this season, with just a handful of matches now left to play. 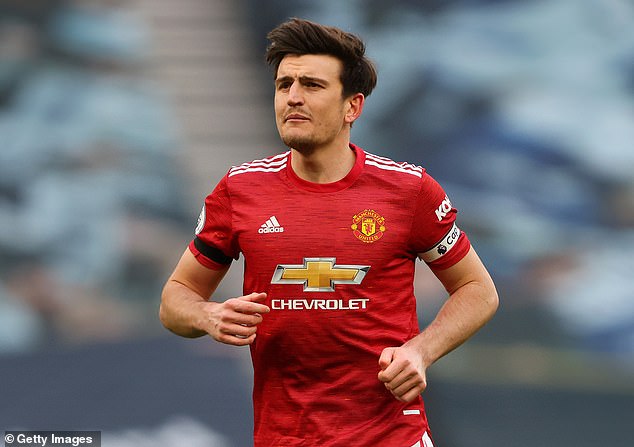 Harry Maguire, Pierre Emile-Hojbjerg, Ollie Watkins, Tomas Soucek and James Ward-Prowse are the quintet who have played the maximum 2,790 minutes (or 2,700 for a team who has played 30 games) for Manchester United, Tottenham, Aston Villa, West Ham and Southampton respectively.

But who has been your club’s marathon man? Sportsmail has found the outfield player who has played the most minutes in the Premier League at each side so far this campaign.

It may come as a surprise, given the Swiss midfielder’s tendency to play poorly, that he has been the most featured player for Mikel Arteta’s side.

Xhaka tops the charts for the Gunners, playing seven minutes more than closest rival Bukayo Saka. Notably, Xhaka’s figure is 640 minutes off the maximum number so it shows Arteta has been chopping and changing his starting XI throughout their disastrous domestic campaign. 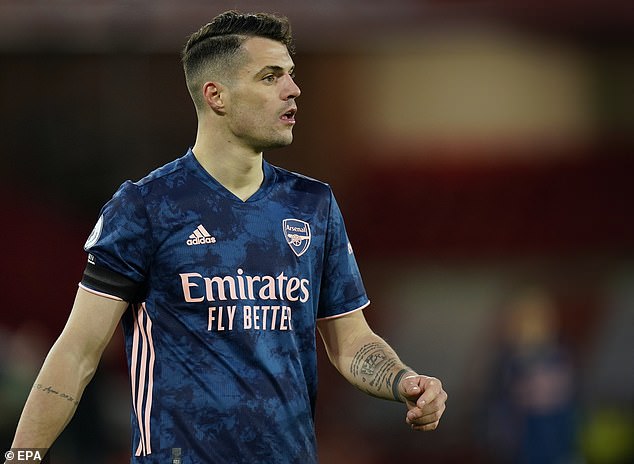 Granit Xhaka has played the most league minutes for Arsenal, despite another mixed season

It is really odd to see an attacker playing every single minute of every single game in the season. Strikers are usually the ones to be substituted first if a manager wants to change formation or switch things around up front.

But Watkins has been trusted by Dean Smith to carry his side’s attack and has impressed with 14 goals in 33 appearances. The Villa forward even won an England call-up last month and scored in the win over San Marino. 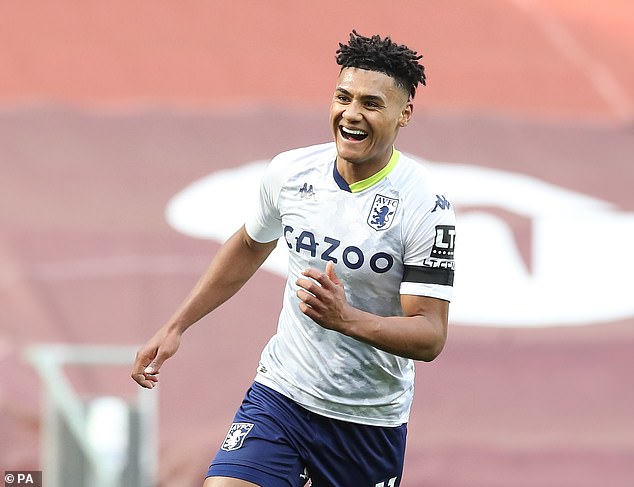 It shows just how impressive White was out on loan at Leeds last season that he has returned to Brighton and instantly become a key player under Graham Potter, playing 2,655 minutes.

White has been used both in the back five and in midfield on occasion this season and, after another impressive campaign, looks likely to be the subject of interest from bigger clubs this summer. 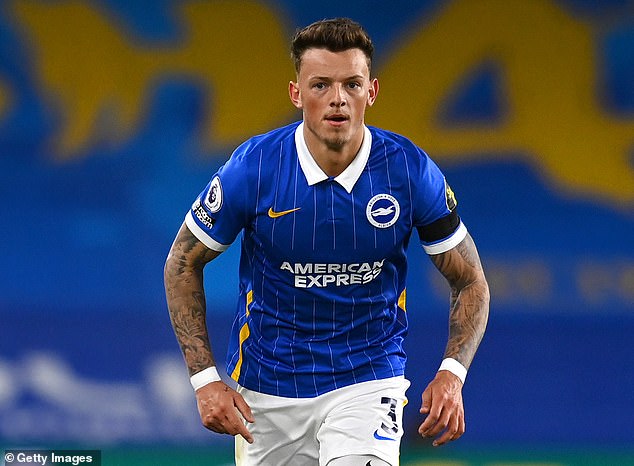 So close for Westwood but he is just nine minutes short of the maximum number after being dragged off by Sean Dyche on 81 minutes against Manchester City on February 3.

Westwood is the epitome of a Burnley midfielder. He’s so good at the basics and never lets his manager or team-mates down, clearly outlined by Dyche’s willingness to use him so frequently this season.

The ability of big clubs to rotate their star-studded squads has been a major benefit to them throughout the season and is highlighted again here by Mount, Chelsea’s player with most minutes, playing short of the maximum (2,790).

Mount has had a superb season both for Chelsea and England. Dropped by Thomas Tuchel for his first game in charge, the midfielder has regained his place at Stamford Bridge and looks like a guaranteed starter for England at this summer’s Euros. 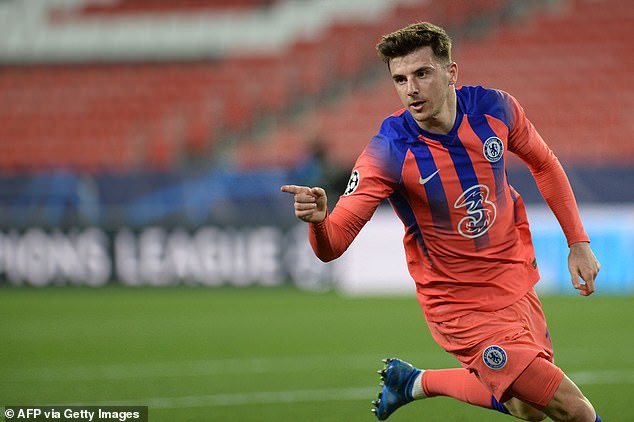 Palace have had their fair share of injuries so far this season but luckily for them they have had Kouyate, the versatile 31-year-old, available for most of the campaign.

He initially moved back from midfield to defence due to injuries but has impressed so much that he is now one of the first names on the teamsheet in the back four.

The England defender has been one of the standout performers under Carlo Ancelotti this season and his form has pushed him into contention for a place in the England squad this summer.

At 2,450, Keane has played 90 minutes in all but four matches this season and will be key if the Toffees are to make a late surge into the Champions League places over the coming weeks. 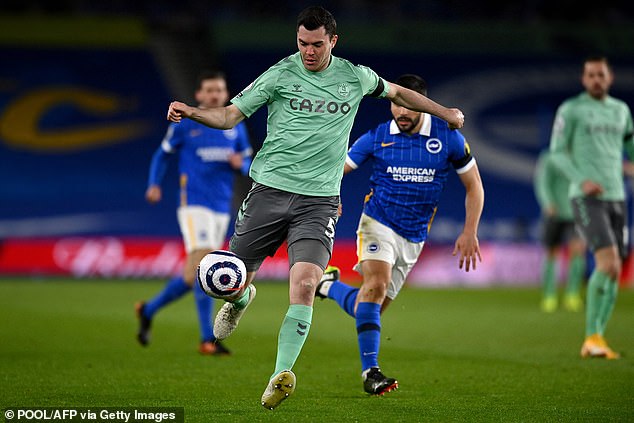 The 23-year-old Adarabioyo has been impressive in the heart of Fulham’s defence that has come on leaps and bounds since their struggles in the early part of the season.

The former Manchester City youth star has formed a strong partnership with Joachim Andersen and they will need to be at their best if they are to give Scott Parker’s side any chance of avoiding relegation in the coming weeks.

The Northern Irishman has been a revelation for Leeds and is the embodiment of Marcelo Bielsa’s front-foot, high-pressing style that has swept the Premier League.

Dallas has played in almost every position on the pitch across the season and most recently starred in midfield against Manchester City, scoring a brace to give Leeds a famous win at the Etihad. 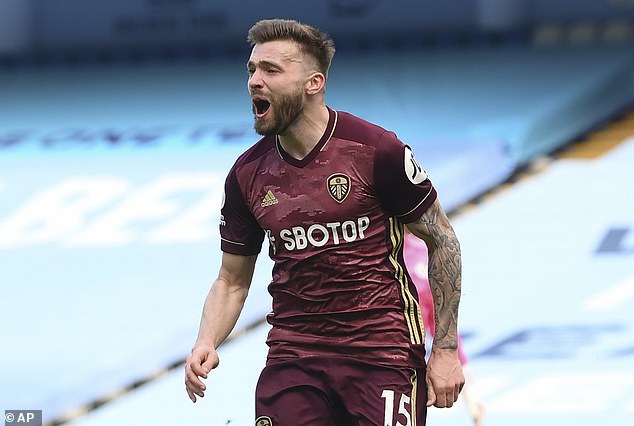 The Belgian is the embodiment of how Brendan Rodgers wants his Leicester team to play. He is exquisite on the ball, works hard off it and has the leadership traits of someone much older than 23.

Tielemans was regarded as a coup for Leicester when they bought him from Monaco and there will be no end of interest in his services this summer. He’s also expected to have a big role for Belgium at the Euros.

In a season where the Reds have been so unlucky with injuries to defenders, Robertson has been almost an ever-present in the Premier League. The Scot has missed just 34 minutes of league action.

Like most of Liverpool’s players this term, Robertson has struggled to reach the heights of the last couple of years but Jurgen Klopp’s side have won three league games in a row and could squeeze into the Champions League spots after all. 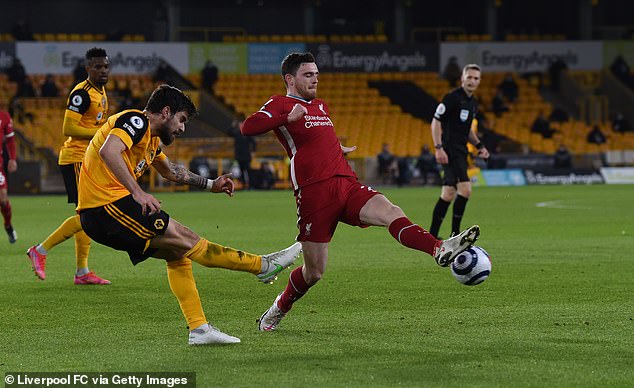 In a season where Liverpool’s defence has been broken up, Andy Robertson has been reliable

Dias has been arguably the signing of the season and looks to be the long-term answer to City’s struggles at centre-back under Pep Guardiola, playing 90 minutes in all but four games.

The Portuguese defender has needed no time to settle into the Premier League and looks at ease alongside either Aymeric Laporte and John Stones. 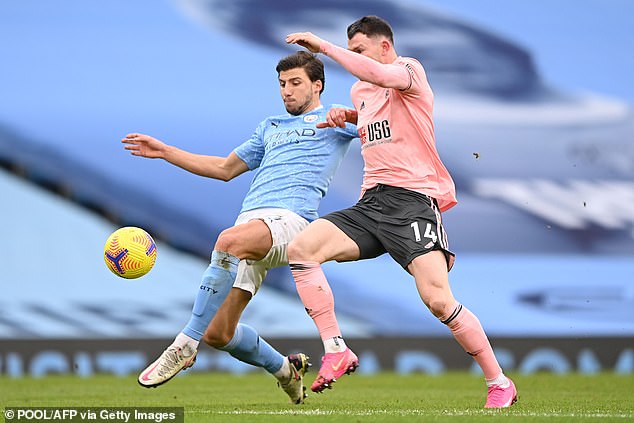 One of the key areas Manchester United need to address in the summer transfer window is finding a suitable partnership for Maguire in defence.

The United captain has played every minute of every league game this season and has become indispensable to Ole Gunnar Solskjaer. With Luke Shaw and Aaron Wan-Bissaka impressing on the flanks, United are just one defender short of a formidable back line.

It is a sign of Newcastle’s frustrating season that the player with the most minutes in the bank has only made 25 appearances in the Premier League.

It shows Steve Bruce has been unable to count on a core group of players each and every week, with Shelvey among those in and out of the team after missing a number of games through injury during the autumn. 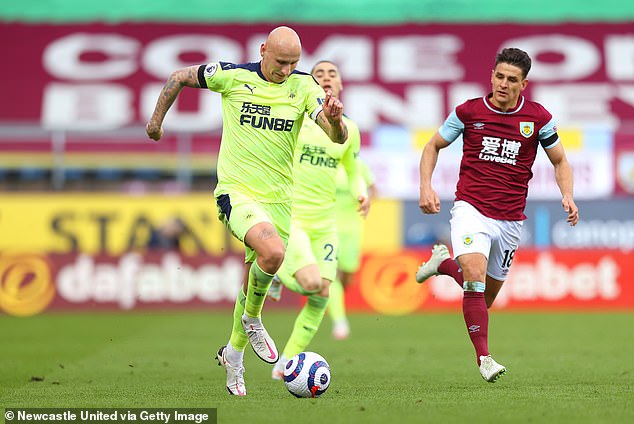 Jonjo Shelvey has played the most minutes for Newcastle, despite only chalking up 1,987

Sheffield United are destined for the drop. They have been abysmal this season, winning just four of their 31 league games, and even after Chris Wilder left there has been no turnaround in results.

Baldock has played the most minutes but a quick look at the numbers show Chris Basham, Enda Stevens, John Lundstram, John Egan and John Fleck are all not far behind. Perhaps the Blades needed an overhaul of the squad after performing such a miracle last season.

Another of the fab five who have played every minute. Ward-Prowse has been in superb form this season and was flying at the start of the campaign when the Saints were briefly top of the table.

Although they have dropped away to mid-table, the midfielder’s performances have continued to be good and he looks likely to win a place in the England squad this summer. 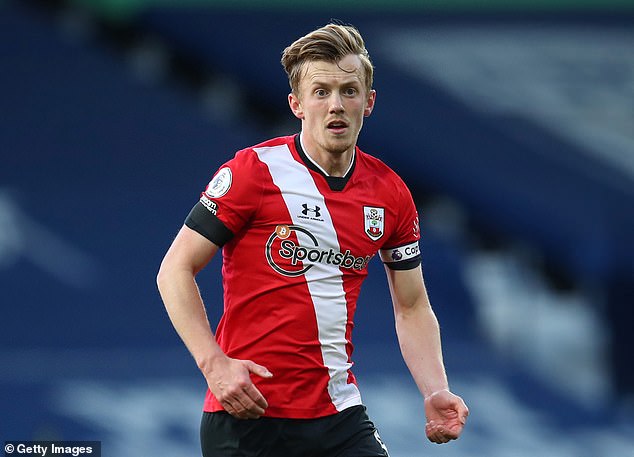 The fourth man in the ever-present quartet is the Danish midfielder who has had an up-and-down season in north London.

He started the season on fire and looked the perfect midfielder for Jose Mourinho’s counter-attacking system. But, like the rest of his Spurs team-mates, he has struggled to maintain that form over the season and results have badly suffered. 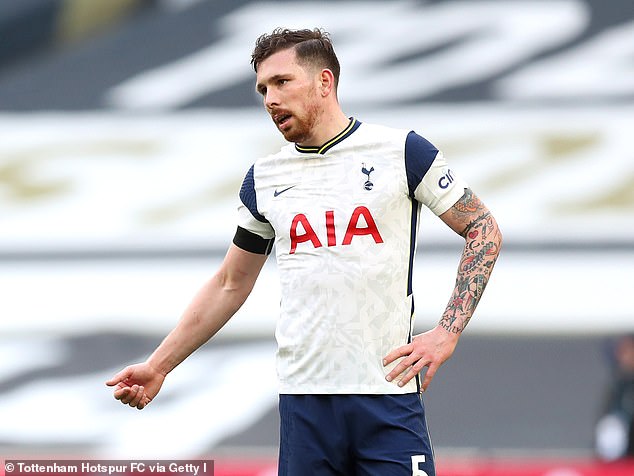 Furlong has been consistent as West Brom’s No 1 right-back this season, first under Slaven Bilic and then under Sam Allardyce since his appointment.

West Brom have obviously conceded a lot of goals but their recent resurgence under Allardyce has offered hope that they could escape the drop. It would be a miracle.

The fifth and final player on the list of those playing every minute of every league game this season is the impressive Czech midfielder. Soucek has been a remarkable signing since arriving from Slavia Prague in January 2020 and the catalyst for the Hammers’ unlikely European push.

If they are to finish in the top four, he could be vital in the final few weeks of the campaign. Aaron Cresswell (2,753), Declan Rice (2,610) and Lukasz Fabianski (2,610) have all been remarkably consistent for David Moyes, too. 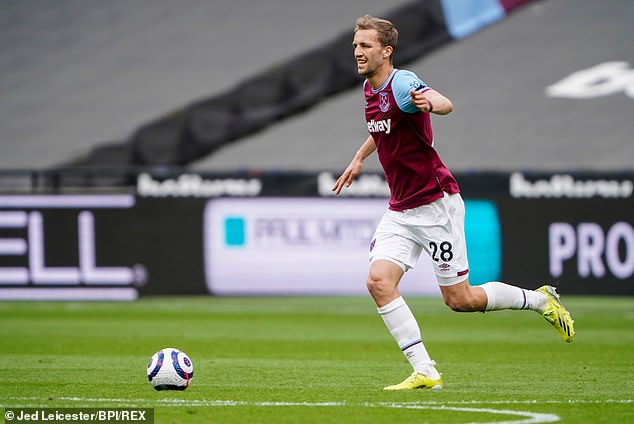 It is no surprise that Coady tops the chart for minutes played at Wolves this season after missing just one game since they returned to the Premier League in 2018-19.

Coady is the heartbeat of the Wolves team, perfecting his ability to play in the middle of the back three and looks likely to be in the England squad for the Euros. 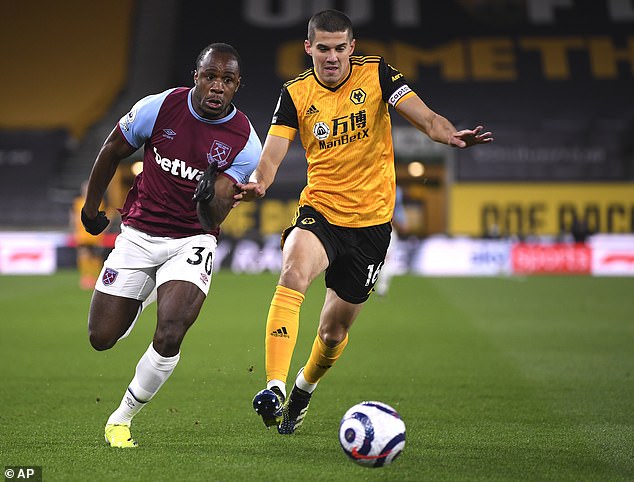