Transgender woman’s boyfriend blasts ‘disgusting’ trolls who attacked their relationship and insisted he ‘must not know’ she is trans: ‘Just because you’re unhappy doesn’t mean we need to be’

By Erica Tempesta For Dailymail.com

A transgender woman’s boyfriend has hit back at critics who have questioned their relationship and accused her of not telling him she’s trans, saying he thinks it’s ‘completely disgusting.’

Jayde McFarlane, 20, and her boyfriend Tyler have gone viral after responding to a commenter who claimed he must not know that she is trans because he wouldn’t be in a relationship with her if he did.

The TikTok star, who makes humorous videos about her life as a trans woman, shared footage of Tyler cuddling with her in bed. ‘Do you know I’m trans?’ she asked him while running her fingers through his hair. 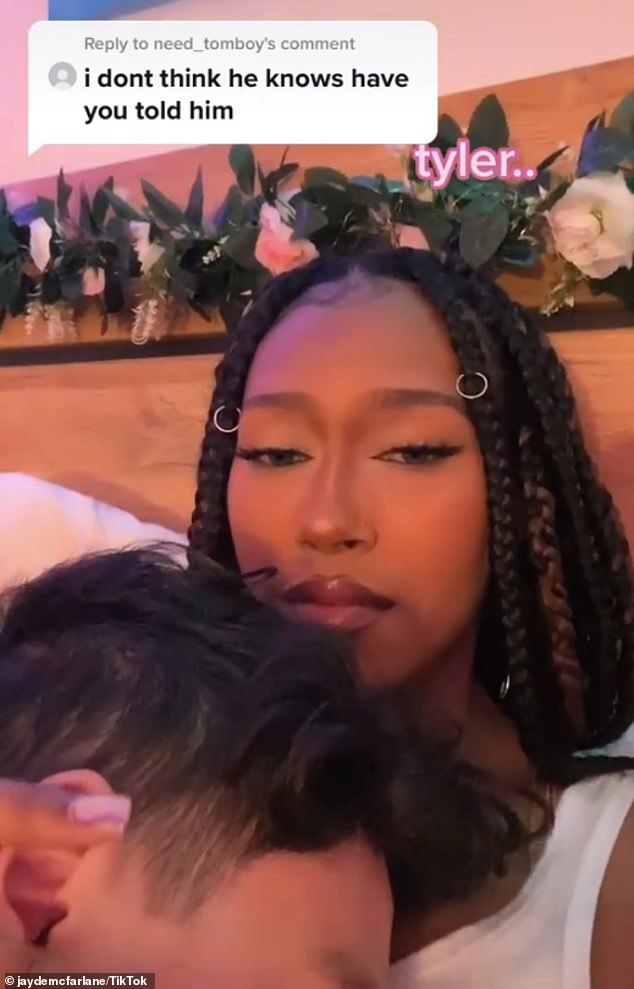 Hitting back: Transgender TikToker Jayde McFarlane, 20, and her boyfriend Tyler have responded to a commenter who claimed she must be keeping her trans identify from him 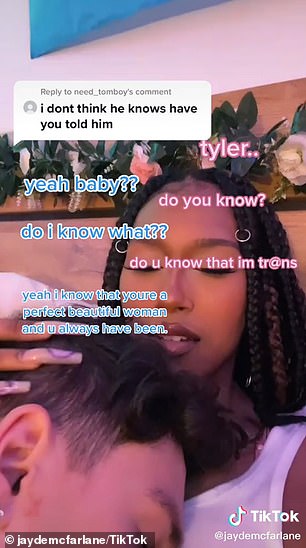 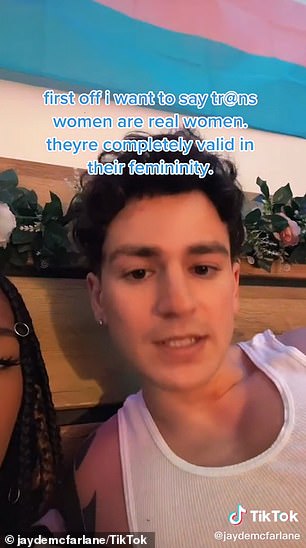 Not right: The stranger suggested that Tyler wouldn’t be in a relationship with Jayde if he knew she was transgender. ‘Trans women are real women,’ he fired back

‘Yeah. I know that you’re a perfect, beautiful woman, and you always have been,’ Tyler replied, leaving Jayde visibly touched by his response.

‘Is this [about] one of those comments on TikTok again?’ he asked.

When Jayde confirmed that it was, he got up and shared a powerful message about why the person’s assumption that his girlfriend was hiding her identity from him was damaging and anti-trans.

‘First off, I want to say trans women are real women,’ he said. ‘They’re completely valid in their femininity. 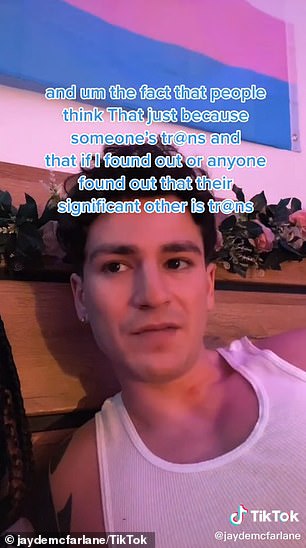 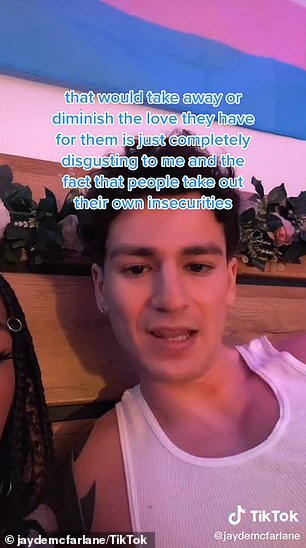 Response: Tyler said it’s ‘disgusting’ that people would think that Jayde being trans ‘would take away or diminish the love they have’

‘This was so sweet’: Thousands of TikTok users have praised Tyler for his thoughtful response

‘And the fact that people think that just because someone’s trans and that if I found out — or if anyone found out that their significant other is trans — that would take away or diminish the love they have for them is just completely disgusting to me,’ he continued.

‘And the fact that people take out their own insecurities and things that they’re worried about from their past and try to apply it to this situation is just disgusting. Just because you’re unhappy in life doesn’t mean we need to be too.’

The couple’s video has been viewed more than 5.9 million times and has received thousands of comments praising him for his response.

‘His heart is so pure. He said it so perfectly, and people need to take notes on what true love looks like,’ one person wrote, while another added: ‘This was so sweet!’ 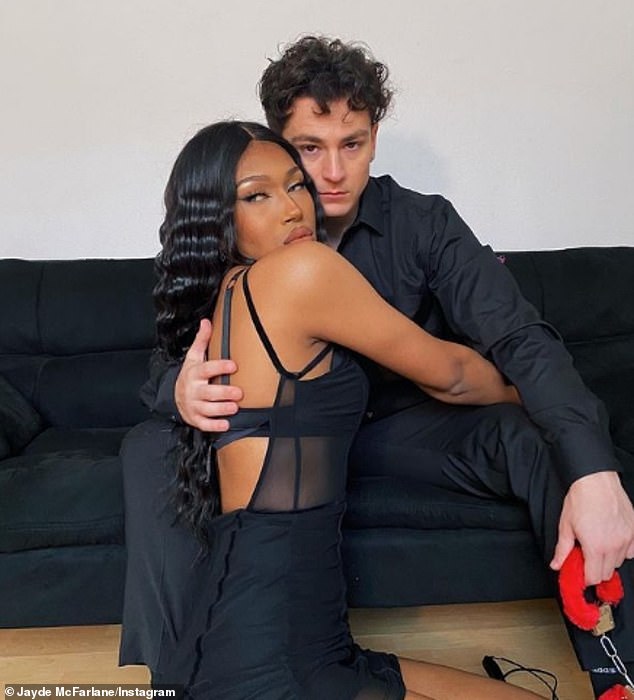 Going viral: The couple’s video has been viewed more than 5.9 million times 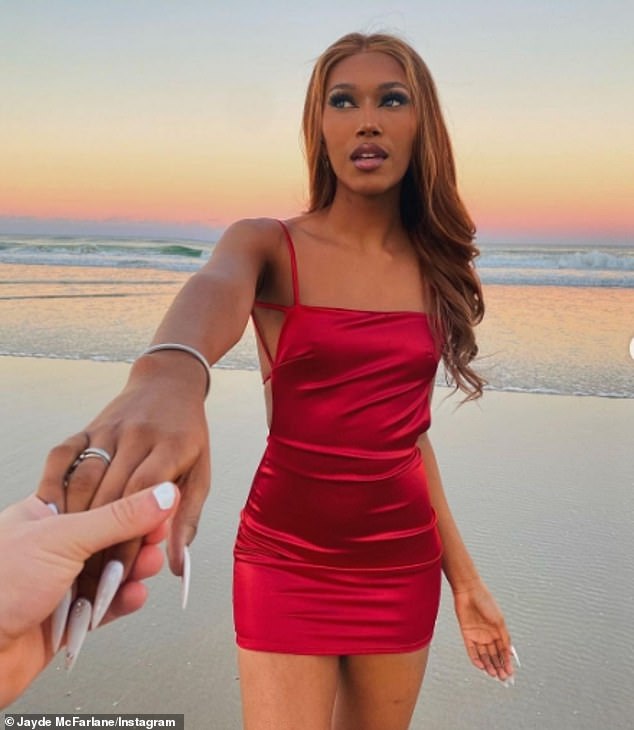 Hard to handle: Jayde said she receives ‘negative comments on a daily basis,’ explaining that people constantly misgender her 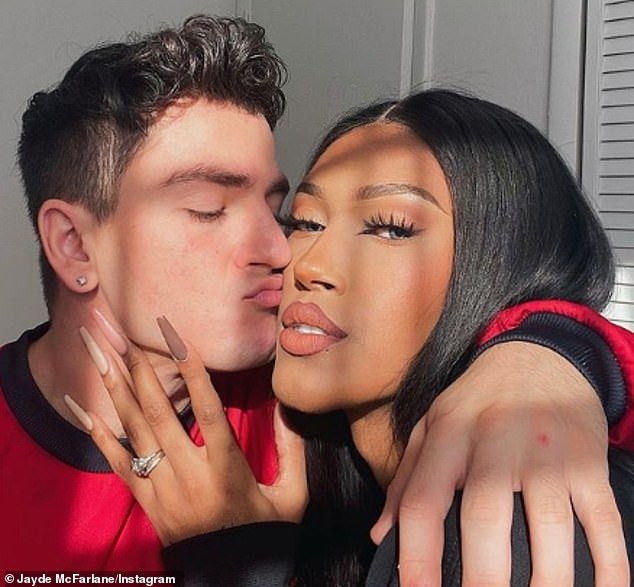 Inspiring: Jayde and Tyler hope their video will show other members of the trans community that they can find love too

Jayde told BuzzFeed that she receives ‘negative comments on a daily basis,’ explaining that people constantly misgender her and tell her what she is doing is ‘wrong.’

‘I won’t feel bad about myself because of what others think. There’s absolutely no point when I could be happy, because what really matters is [what I] think about myself,’ she said.

Jayde and Tyler hope their video will show other members of the trans community that they can find love too.

‘In my community, relationships are such a hard topic for all of us,’ she said, ‘and I feel like me showing my relationship publicly lets other trans women and men know we can be loved and cared for, too.’