Soldiers from The Corps of Royal Electrical and Mechanical Engineers (REME) had responsibility for ensuring the vehicle stuck to its precise route and timings, after several days of intense rehearsals.

The hearse, which Philip took an active role in modifying over 18 years, was at the heart of the service today.

The duke was heavily involved in plans to make sure it had a military green paint job, while adding features such as the open top rear and devices to keep the coffin in place.

He began the bespoke project in collaboration with Land Rover in 2003, adding other adjustments as recently as 2019, when he was 98.

Corporal Craig French, 29, said before the service: ‘For the past week I have been rehearsing for the role of Land Rover Commander for the Royal Hearse and it is my job to support the driver, so essentially I ensure that the driver puts the vehicle in the right place at the right time and whether to speed up or slow down.

‘We have done a lot of practice over the last few days and you get to feel what the correct speed is, and we know what pace we have to be at. It’s now like second nature.

‘There are also a couple of difficult sections on the route and on either side, there are people accompanying the hearse, so it is important to keep a safe distance.’ 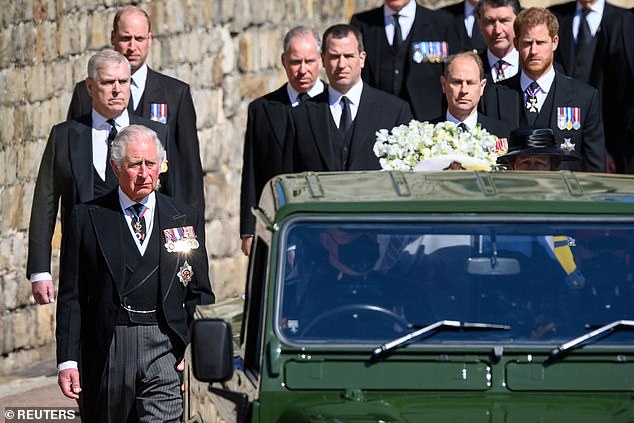 Members of the Royal Family follow the hearse, a specially modified Land Rover, during the funeral of Britain’s Prince Philip 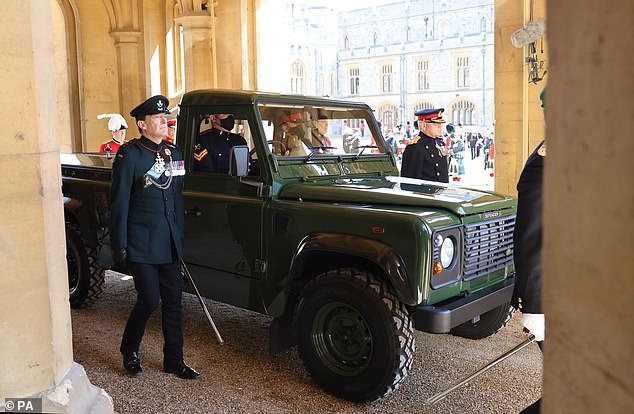 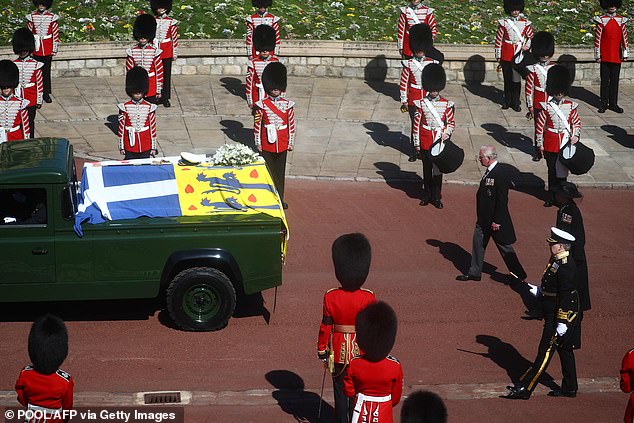 Meanwhile, Deputy Colonel Commandant of The Rifles, Major General Rupert Jones, son of Herbert ‘H’ Jones, who was awarded a posthumous Victoria Cross by the Queen for his heroism in the face of battle with the Argentinians in 1982, carried the Duke on his final journey today.

Major General Jones was joined as a pallbearer by Lt Alec Heywood,  a Grenadier Guard whose grandfather served at both the funeral of George VI and the Queen’s coronation. He will be in command of the bearer party carrying Prince Philip’s coffin.

H Jones, as he was known to all his comrades, was killed as he led the 2nd Battalion, The Parachute Regiment, into battle on the occupied British islands in the south Atlantic. He was mortally wounded by machine gun fire as he personally led the attack near Goose Green.

His son, Major General Jones, is a leading office in The Rifles. Philip, who served heroically in the Royal Navy during the Second World War was Colonel-in-Chief of the regiment, one of 42 appointments he enjoyed in the British armed forces and the Commonwealth. 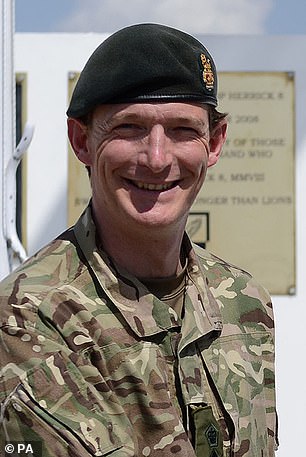 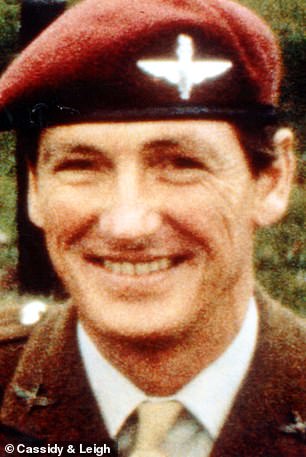 Pallbearer Deputy Colonel Commandant of The Rifles, Major General Rupert Jones (left), is the son of Herbert ‘H’ Jones (right), who was awarded a posthumous Victoria Cross by the Queen for his heroism in the face of battle with the Argentinians in 1982. 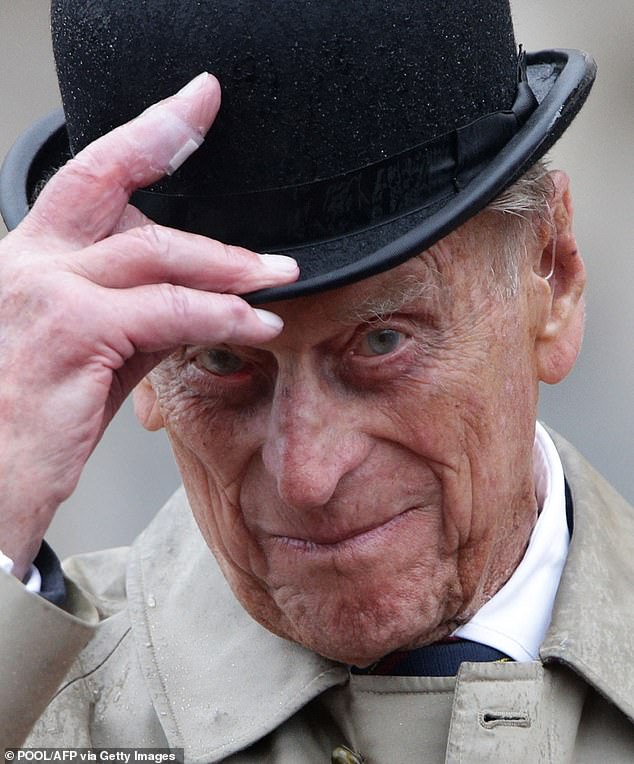 Prince Philip lifts his hat during his final public engagement in 2017 with his beloved Royal Marines, whose leaders helped carry Philip’s coffin today 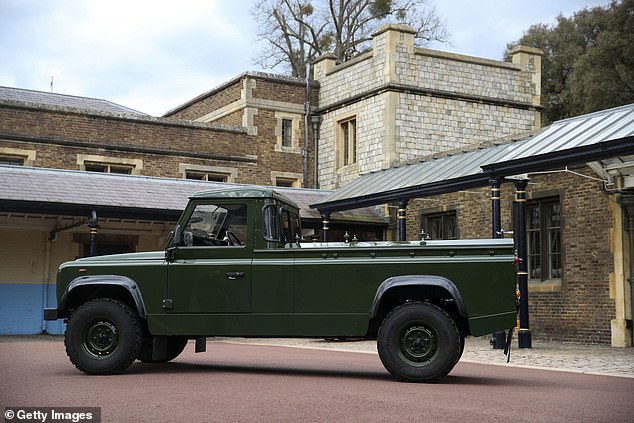 The Jaguar Land Rover that was be used to transport the coffin of Prince Philip, Duke of Edinburgh, at his funeral. He helped design it himself

Lt Alec Heywood led the unit from The Queen’s Company, 1st Battalion Grenadier Guards as it moves the coffin from Windsor Castle’s private chapel to the inner hall before the start of the funeral procession.

As a third generation Grenadier Guard Lt Heywood’s family have a long history of service in the British Army. His grandfather captained The Queen’s Company at George VI’s funeral and the Queen’s Coronation in 1953.

Lieutenant Alec Heywood, a third generation Grenadier Guard, commanded the Grenadier Guards bearer party. His grandfather was the captain of The Queen’s Company at George VI’s funeral in 1952 and the Queen’s Coronation a year later.

The Duke of Edinburgh’s beloved Royal Marines accompanied his funeral on its final journey.

Philip’s first major appointment after his naval career ended in 1953 was as commander of the marines. His grandson Prince Harry took the role in 2017 until the Queen stripped him of all his titles when he quit as a frontline royal with his wife Meghan Markle. 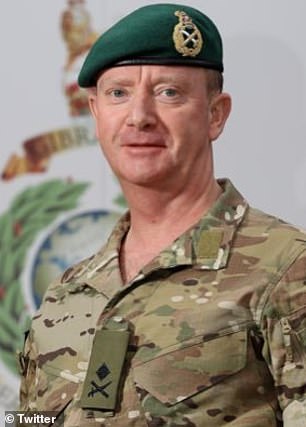 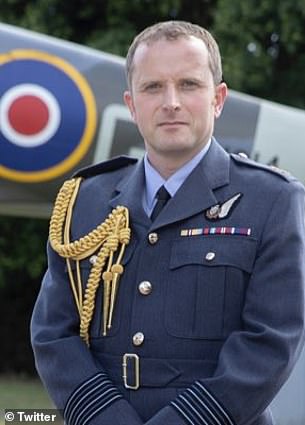 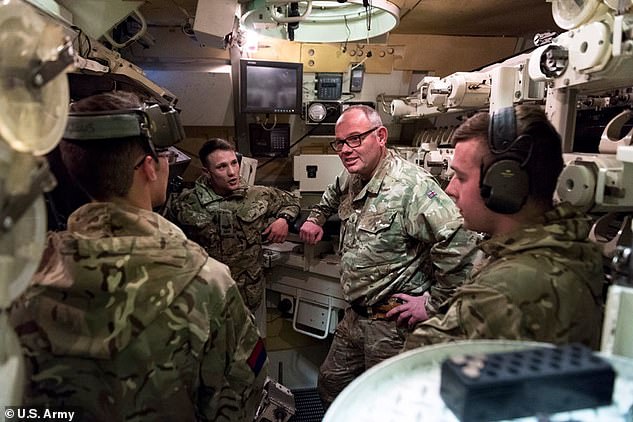 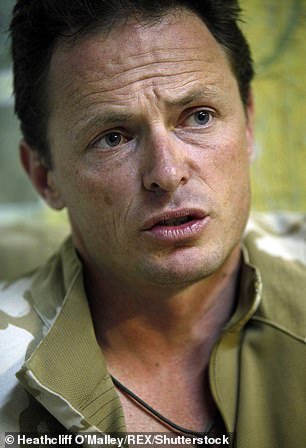 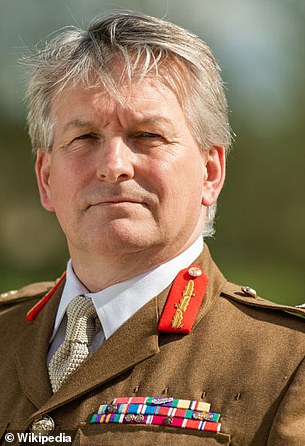 Military duties began hours before the funeral at 3pm on Saturday afternoon, with Philip’s coffin – covered with his personal standard and surmounted with his sword, naval cap and a wreath of flowers – moved at 11am by a Bearer Party found by The Queen’s Company, 1st Battalion Grenadier Guards, from the private chapel to the inner hall of Windsor Castle.

By 2.15pm, the service detachments recognising Philip’s special military relationships was in position in the Quadrangle, which was also lined by the Household Cavalry and The Foot Guards.

The Band of the Grenadier Guards, of which Philip was Colonel for 42 years, led the procession to St George’s Chapel.

They were followed by the Major General’s Party, and then the Service Chiefs, which included the Chief of the Air Staff, Naval Staff and Defence Staff.

Philip had a distinguished career in the Royal Navy and while he gave up active service in 1951, he remained closely connected to it and other military elements throughout his public life.

The coffin, transported from the castle to the chapel in a specially-modified Land Rover Philip helped to design, was flanked by pallbearers drawn from the duke’s special relationships – the Royal Marines, regiments, corps and air stations.

The route of the procession was lined by representatives drawn from the Royal Navy, the Royal Marines, the Highlanders, 4th Battalion Royal Regiment of Scotland and the RAF.

Minute Guns were fired by The King’s Troop Royal Horse Artillery from the East Lawn for the duration of the procession and a Curfew Tower Bell will sound.

As the procession approached Horseshoe Cloister, the Band of the Grenadier Guards stopped playing and marched through into Denton’s Commons.

The Rifles Guard of Honour, positioned in Horseshoe Cloister, gave a royal salute and the national anthem will be played.

In tribute to Philip’s Naval service, a Royal Naval Piping Party of 1 Chief Petty Officer and 5 Ratings was present.

The piping party piped the ‘Still’ once the Land Rover is stationery at the foot of the steps.

A bearing party of Royal Marines then carried the coffin up the steps and pause for a minute’s silence.

The Archbishop of Canterbury and the Dean of Windsor received the coffin.

Inside the chapel, Philip’s insignia – the medals and decorations conferred on him by the UK and Commonwealth countries – together with his Field Marshal’s baton, Royal Air Force Wings, and insignia from Denmark and Greece, were pre-positioned on cushions on the altar.

The Last Post was sounded by buglers of the Royal Marines from the west end of the Nave.

Buglers of the Royal Marines sounded Action Stations during the service at the duke’s request.

It is played on a warship to signal all hands should go to battle stations and is sometimes featured at funerals of naval men.

Members of the royal family did not wear military uniform, but instead the royal men will wear morning coats with their medals while the women will wear day dresses.

For 16 years Prince Philip tinkered and toiled on a secret project he knew he would never live to see used – the hearse to carry his own coffin.

Now, two days before his funeral on Saturday, the custom-made Land Rover designed by the Duke has been unveiled for the first time.

The open-top rear has been modified to fit his coffin and equipped with special rubber grips on silver pins – known as the ‘stops’ – to keep it secure while it makes the journey through Windsor to St George’s Chapel.

A military man to his core, Philip also requested the original Belize Green paintwork was changed to Dark Bronze Green like those used by the armed forces. 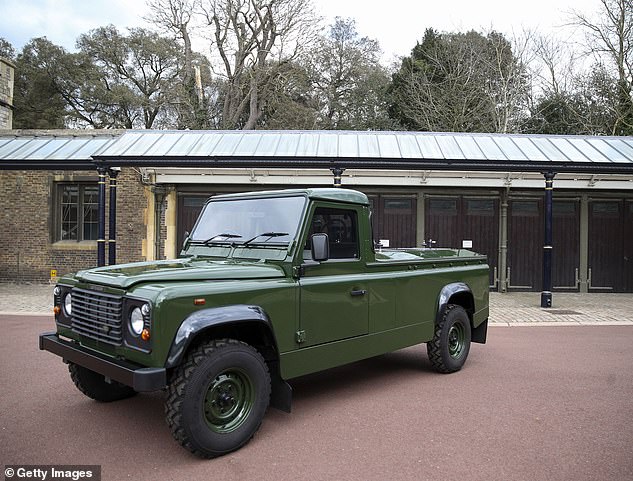 Now, two days before his funeral on Saturday, the custom-made Land Rover designed by the Duke has been unveiled for the first time 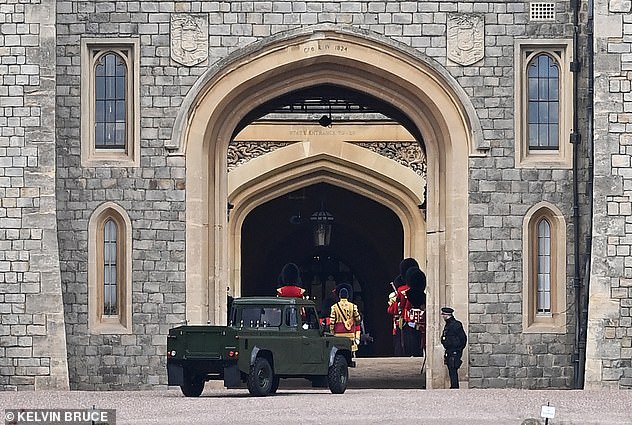 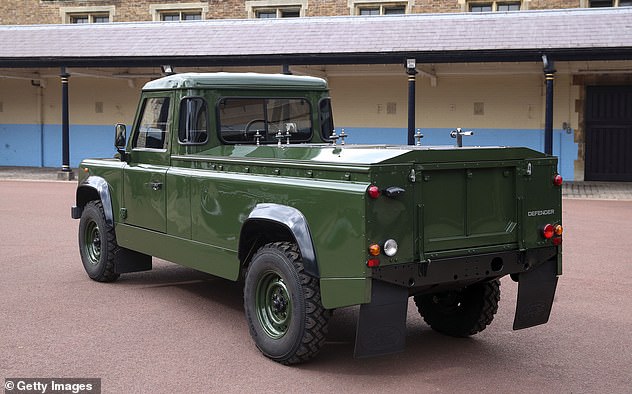 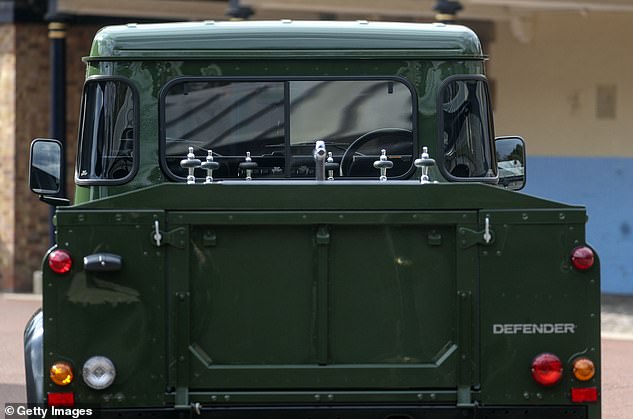 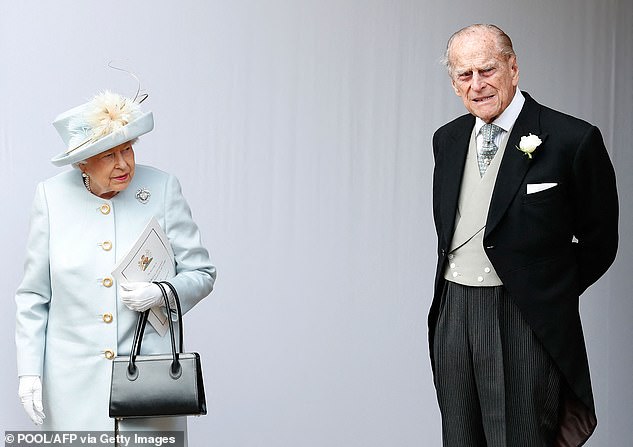 The military green repaint was one of many modifications Philip made to the vehicle, that was first built a the manufacturer’s Solihull factory.

With heavy duty wheels and angular structure, the sturdy design stands testament to the Duke’s penchant for engineering and functionality.

Land Rover has maintained the vehicle since it was built and has prepared it for the funeral in collaboration with the Royal Household.

Chief executive Thierry Bollore said: ‘We are deeply privileged to have enjoyed a very long and happy association with the Duke of Edinburgh over many decades.

‘We are also honoured that the Land Rover which the duke designed will be used at the funeral on Saturday.

‘The duke was a tremendous champion for design, engineering and technology.

‘During his visits to our sites he engaged with hundreds of employees and demonstrated his impressive knowledge and deep interest in vehicle design, engineering and manufacturing.

‘The duke was a truly remarkable man and will be greatly missed.’ 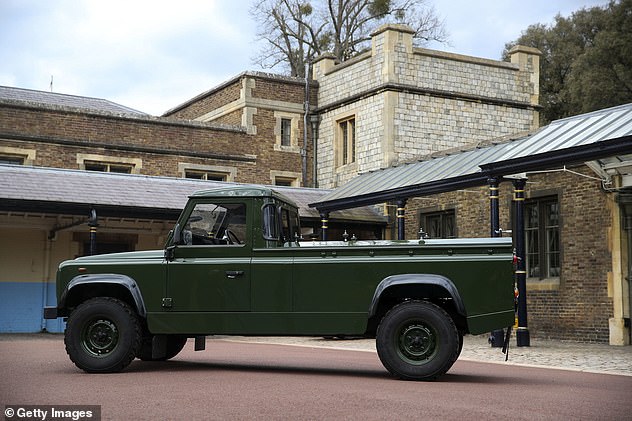 The military green repaint was one of many modifications Philip made to the vehicle, that was first built a the manufacturer’s Solihull factory 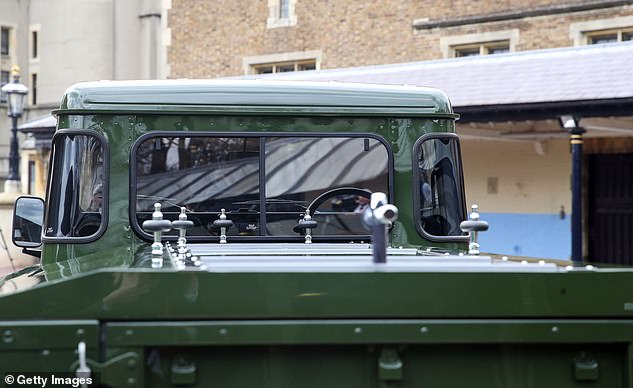 Details on the vehicle include matching green hubs, a black front grille, a single cab and no registration plates 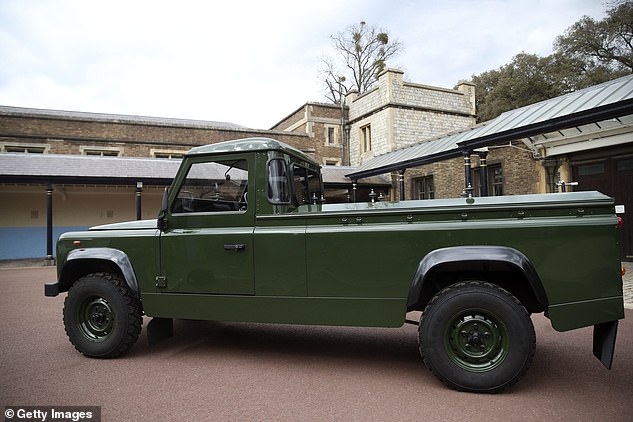 With heavy duty wheels and angular structure, the sturdy design stands testament to the Duke’s penchant for engineering and functionality

Details on the vehicle include matching green hubs, a black front grille, a single cab and no registration plates.

The Duke used Land Rovers throughout his adult life and granted his Royal Warrant to Land Rover over 40 years ago.

The Land Rover’s original role would also have been to transport the duke 22 miles from Wellington Arch in central London to Windsor, but the coronavirus pandemic curtailed the long-held plans for military parades in honour of Philip through the streets of both the capital and the Berkshire town.

It will be flanked by pall bearers reflecting the duke’s special relationships with the military, the Royal Marines, Regiments, Corps and Air Stations.

Palace officials have told how the duke’s interest in design sparked his desire to make the Land Rover and include it in his funeral plans, codenamed Operation Forth Bridge.

Two Land Rovers were made for ‘belt and braces’ in case a backup was needed.

In 2019, the duke, then 97, was driving a Land Rover Freelander when he was involved in a serious car crash involving a mother and a baby.

The car Philip was driving was hit by another vehicle when he pulled out of a driveway on the Sandringham estate in Norfolk on to a busy A road, after being dazzled by the low sun.

The duke’s car flipped over and he was trapped, and had to be rescued through the sunroof by a passing motorist. He was miraculously unscathed.

The baby was unhurt, but both women in the other vehicle had to be treated in hospital, and one broke her wrist.

Three weeks after the crash, Buckingham Palace announced that Philip’s driving days on public roads were finally over and that he had voluntarily surrendered his driving licence.

The CPS later confirmed Philip would face no action over the crash.