An overwhelmed couple were left horrified when professional cleaners discovered a decaying animal carcass in their living room on Filthy House SOS.

Stuart and Sarah, who lived with their three children and three cats on the outskirts of York, admitted on last night’s 5Star show that they had let the mess in their family home get out of control after moving in five years ago.

The couple, who went through IVF for each of their pregnancies, struggled to know where to start when cleaning the huge property and called in professional cleaners Richard and Brennan to help.

But the cleaners were left stunned to discover a decaying body of a rodent in the corner of the family’s lounge, with Richard saying it was ‘presumably something the cat had brought in’.

Viewers said they were ‘speechless,’ after seeing the state of the house before i was cleaned. 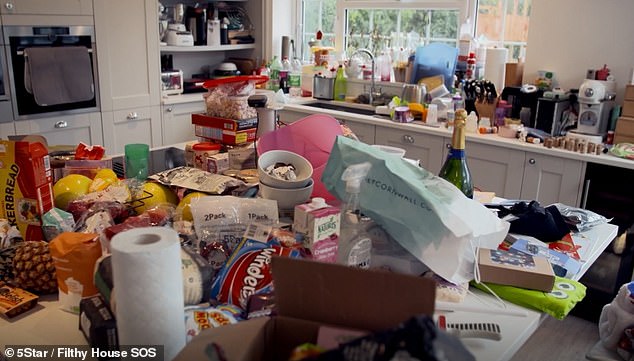 Last night, on 5Star’s Filthy House SOS, Stuart and Sarah, who lived with their three children and three cats in a large family home on the outskirts of York, admitted they had let their home go astray since moving in five years ago 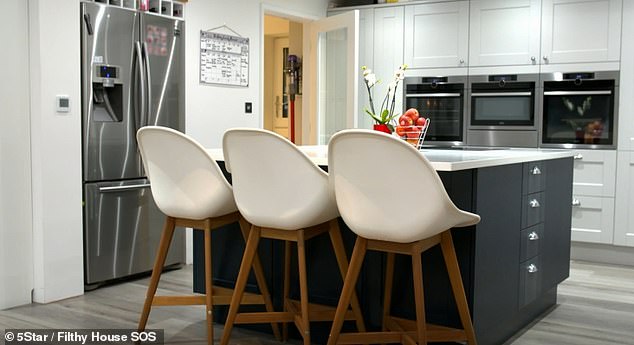 After the big clean up, the kitchen was restored to its former glory, with all utensils and food stored in the correct emplacements

At the start of the show, the large house was covered in dust and unused items bought by Sarah, and was in dire need of some TLC.

Stuart explained the couple never took the time to settle into their new home when they first moved half a decade ago.

He confessed: ‘We moved kind of two households into one, and we didn’t take time to sort things out.’ 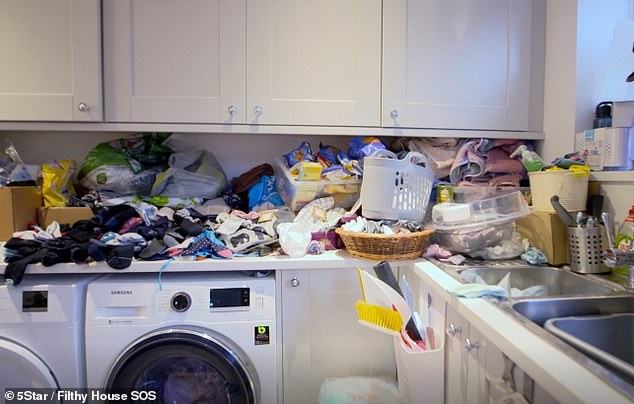 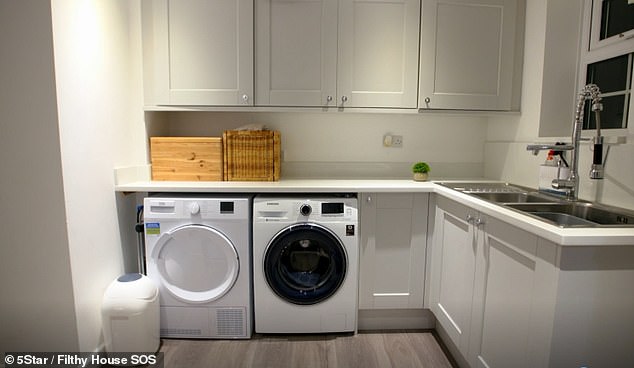 After the three-day cleaning, the utility room had been cleared of all the laundry and was finally functional

Sarah continued: ‘We’re both really busy, so the general mess is both of us, we’re both culpable.’

She explained the added stress of having multiple rounds of IVF had been difficult for the couple, saying: ‘We struggled to have children, so we had a few rounds of IVF to get our eldest daughter and a few more to get the twins.’

Calling it ‘an all consuming process, financially and emotionally’, she continued: ‘I do buy things to make myself feel better, so there’s a bit of that going on.’

The couple recruited the help of super cleaner team Richard and Brennan, and said without some serious intervention, the house would just ‘continue to get worse and worse’.

But when the duo first visited Sarah and Stuart’s home, they were taken aback by the ‘chaotic’ house.

They immediately spotted piles of empty delivery boxes in the living-room and unpacked items which were taking dust.

While Brendan said it appeared the couple had ‘given up’, Richard added: ‘We got problems.’ 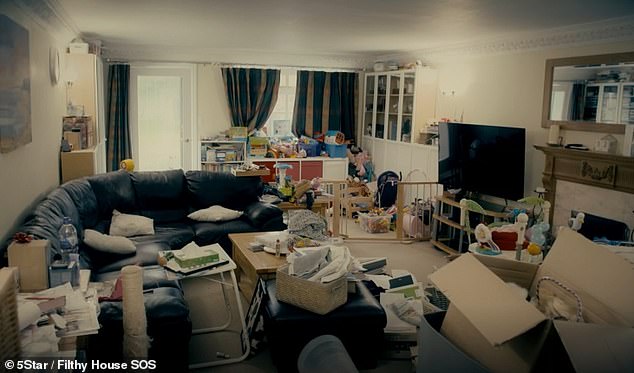 The living-room, pictured before, was fulled of items Sarah had bought but never used, and boxes that dated back to the family’s move five years ago 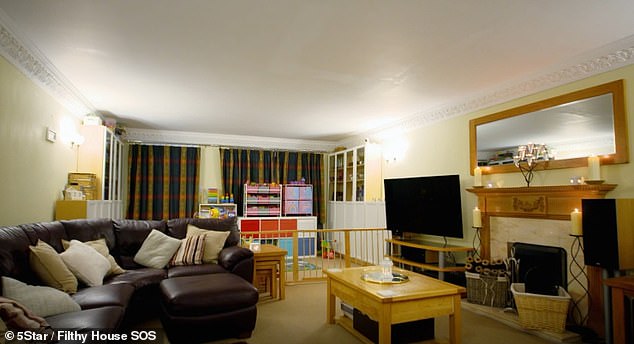 After the transformation, the living-room wad cleared of all the clutter and divided into a seating area was Stuart and Sarah and a play area for their children, pictured

In the kitchen, there was no counter space on any of the counters, and  their fridgee was full of out-of-date food – including packs of butter that expired in 2016.

Richard explained: ‘This is a big job.’

Speaking to the couple, Richard gently told them they needed the help, saying: You’ve got three really young kids, I know you’ve been on maternity leave but you both work long hours when your working and this happens and you need help.’

An emotional Sarah started crying, saying:  ‘Other people have twins and their houses don’t look this trashed.’ 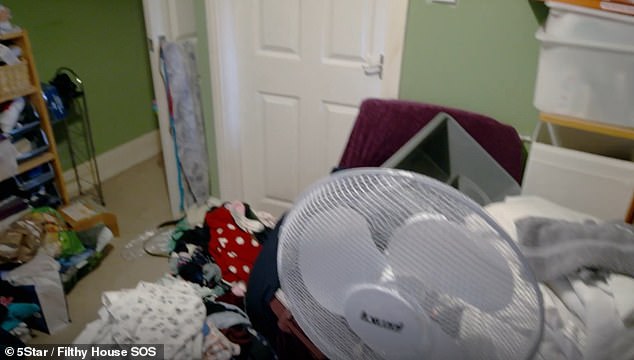 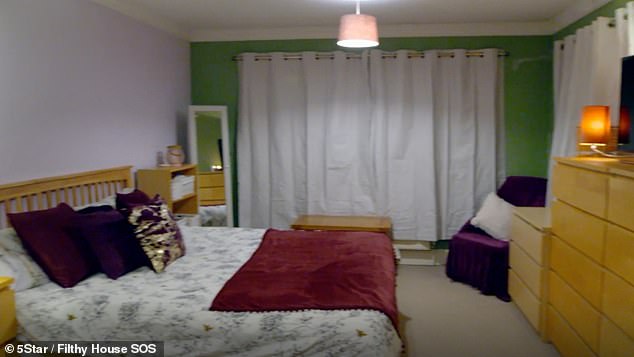 When Richard and Brennan were done with the house, the master bedroom was ‘swanky,’ Sarah said

But Richard enforced a positive mindset on the mother-of-three, saying:  ‘I don’t want you to compare yourself to other people because it’s not going to help you.’

As the cleaning got underway, Sarah and Stuart were confronted with the reality of the mother-of-three’s compulsive buying.

The couple’s living-room was full of empty parcels and unopened items that were brand new but had never been used.

Sarah confessed: ‘I’ve spent a lot of the last year on the sofa with two breastfeeding babies and not a lot of adult social company, so I’ve been buying things, to cheer myself up.’

And while the couple agreed it was time for a change, Richard and Brennan were not convinced they understood the amount of work that was needed to clear the house. 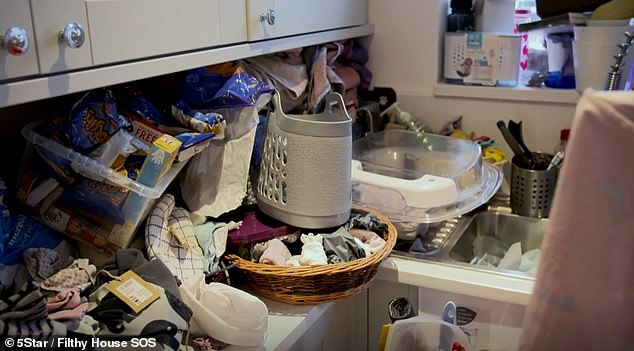 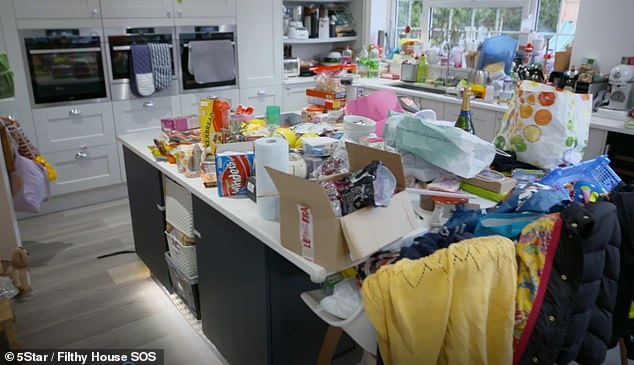 It was impossible to cook in the kitchen, which was full of clothes, packages and filled to the brim with random objects (pictured)

Sarah showed her ‘headstrong’ side while clearing the kitchen with Richard after she refused to clear the out-of-date products from her cupboards.

She argued: ‘Best before is just what’s peak perfection of taste.’

The next day, the duo of super cleaners put together a ‘rubbish review system’ in the garden so that Stuart and Sarah could go through what needed to go and what they could keep.

But while cleaning out the house Richard and Brennan were shocked to find some very unpleasant surprises, including the decaying body of what looked like either a bird or a rodent.

‘Presuming that’s what the cat brought back in,’ Richard said. 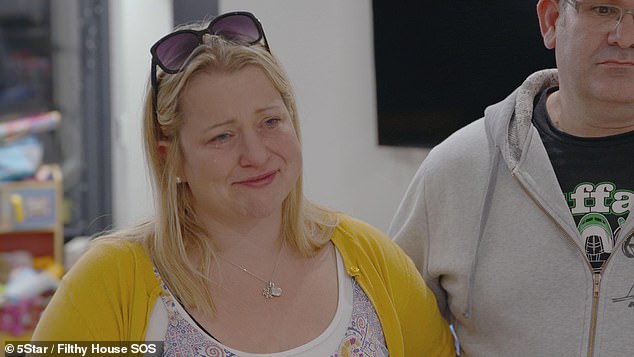 Mother-of-three Sarah, pictured, found it hard to letting go of objects, and felt guilty for the mess around her home (pictured)

He said: ‘It’s not good, the fact there is an dead animal in the living room, which is the family room.’

Meanwhile Brennan added: ‘I think if anybody was to find that in their home, they would realise things need to change.’

But Sarah took a relaxed approach to the news, telling the camera:  ‘We were half expecting that we might have an unwelcome gift from the cats that we’d found during this process.’

Later, Sarah got emotional as she discussed trying to conceive and her IVF process. 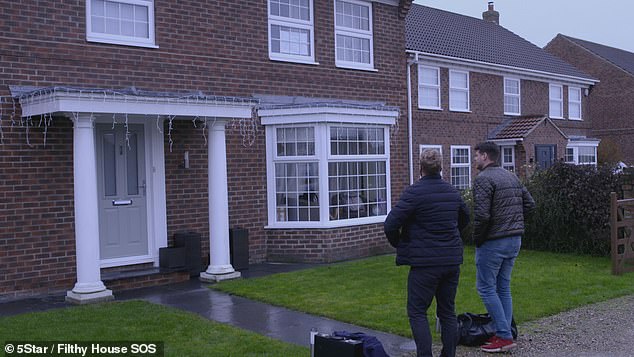 From the outside, it looked like the couple lived in a beautiful home, but the inside was overtaken by rubbish (pictured: Richard and Brennan headed in)

She said: ‘Every aspect of it is tough, it’s tough emotionally, it’s tough physically, drugs make you feel pretty rubbish.

‘It’s so all consuming, it takes over and when you’re feeling pretty frumpy on medication you don’t want to come home and clean and do stuff.’

Upstairs, the couple’s master bedroom was overrun with dusty bottles and the utility room was covered in clothes that had been washed but had never been put away.

After Richard pushed Sarah to get rid of some things, she confessed she was clinging onto clothing which had fitted pre-pregnancy.

After she burst into tears, Richard finally understood why Sarah had such a hard time letting go and continued clearing the house.

Wanting to draw attention to the low-level of cleanliness of the couple’s home, Brennan used a UV light to show Stuart how badly stained the living-room carpet was. 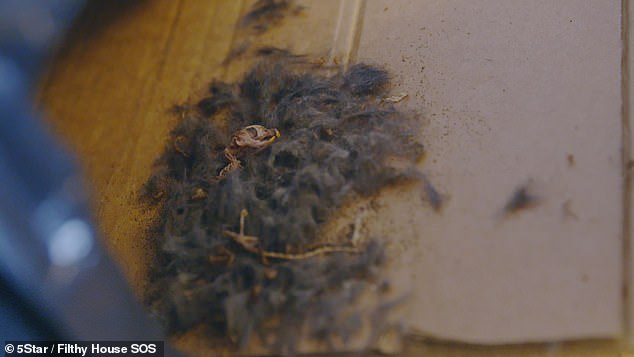 To their horror, Richard and Brennan discovered a decaying animal corpse in the livingroom, which had been brought in by one of the cats

The blue light revealed stains of cat urine and rodent droppings on the floor where the children would play together.

But with elbow grease and a cat-deterrent product, Brennan managed to restore the floor to his former glory.

At the end of the process, the house was unrecognisable, with Richard confessing: ‘This has been a very difficult job with a lot of resistance.’

Thankfully, the couple were delighted with the look of their house, with Sarah joking it looked like a ‘posh, swanky house’.

She said: ‘This is million miles away from where we were before and this is beautiful.’

Meanwhile Stuart thanked Richard and  Brennan for their help, saying: ‘It’s an incredible thing you both did for us,’ while Sarah joked: ‘There’s not way it’s going back to how it was.’

Viewers were left ‘speechless’ by the look of the house before the makeover.

‘This isn’t online shopping. Look at that beautiful kitchen,’ one said.

‘That’s a classic case of money burning a hole in your pocket,’ another wrote.

Filthy House SOS airs on Wednesdays on 5Star at 9pm.