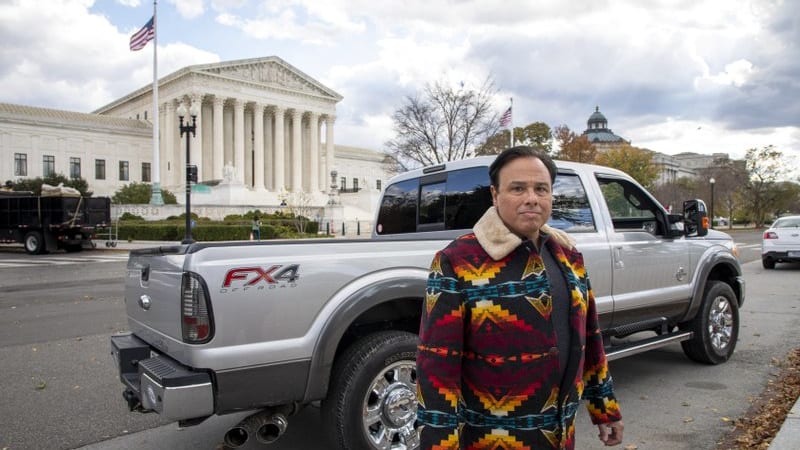 WASHINGTON — Gerardo Serrano ticked off the border crossing agents by taking some photos on his phone. So they took his pickup truck and held onto it for more than two years.

Only after Serrano filed a federal lawsuit did he get back his Ford F-250. Now he wants the Supreme Court to step in and require a prompt court hearing as a matter of constitutional fairness whenever federal officials take someone’s property under civil forfeiture law.

The justices could consider his case when they meet privately on Friday.

It’s a corner of the larger forfeiture issue, when federal, state or local officials take someone’s property, without ever having to prove that it has been used for illicit purposes.

Since 2000, governments have acquired at least $68.8 billion in forfeited property, according to the Institute for Justice, a libertarian public interest law firm that represents Serrano and tracks seizures. The group says the number “drastically underestimates forfeiture’s true scope” because not all states provide data.

Serrano’s troubles stemmed from some pictures he took along the way of a long trip from his home in Tyner, Kentucky, to visit relatives, including a dying aunt, in Zaragosa, Mexico. The photo-taking attracted the attention of U.S. Customs and Border Protection agents in Eagle Pass, Texas.

When Serrano refused to hand over the password to his phone, the agents went through the 2014 silver pickup truck in great detail. They justified its seizure by saying they found “munitions of war” inside — five forgotten rounds of ammunition, though no gun.

Serrano, 62, initially took a gun, for which he has a permit, but a Mexican cousin warned him not to bring it into Mexico. He ditched the weapon, but forgot about the ammo the agents eventually found.

A one-time Republican candidate for Congress, Serrano recalled being surprised at his treatment at the border in September 2015.

“I deleted the photos, but I’m not giving you my phone,” Serrano said.

Told to park the truck, he said, he complained a bit before one agent reached into the pickup, opened the door, unfastened Serrano’s seatbelt and yanked him out of the vehicle.

“I got rights, I got constitutional rights and he snaps back at me, ‘You don’t have no rights here. I’m sick and tired of hearing about your rights.’ That took me aback,” Serrano said.

He was handcuffed and held for several hours, refusing to unlock the phone or answer any questions. Eventually, he was told he could go, but without his truck.

He left the border station on foot, called a relative who lived nearby and hung around the area for several weeks, hoping to reclaim the pickup. Serrano finally rented a car and returned home. He continued to make $673 monthly payments on the seized truck.

Serrano might get some support from at least one justice. While an appeals court judge in New York, Justice Sonia Sotomayor wrote an opinion requiring New York City to hold prompt hearings when police seized cars. “It is this intermediate deprivation, lasting months or sometimes years without any prompt hearing before a neutral fact-finder, that we deem constitutionally infirm,” Sotomayor wrote in 2002.

The Supreme Court took up the issue of whether governments must hold a reasonably quick hearing following a seizure once before, in a case from Chicago in 2009. But the court dismissed the case because the seized vehicles all had been returned by the time the case was argued.

The Biden administration is urging the court to reject the case, saying there was nothing wrong with the initial seizure of the pickup and arguing that Serrano’s claims ended when the vehicle was returned to him.

But Serrano’s lawyers contend that the court should confront the issue because otherwise governments will continue to hold property for long periods and return it only to evade a judge’s review.

“The rampant due process violations associated with modern civil forfeiture warrant review,” they said in a high-court filing.

Serrano did get to see his aunt on the 2015 trip. Cousins drove across the border and took him to her. “When I went back home, three days later they called me and said she died,” he said.