By Mike Dickson for the Daily Mail

Katie Boulter maintained her calm through a three hour delay before coming out and propelling Great Britain to victory in the Billie Jean King Cup.

After the unexpected lunchtime upset of Heather Watson, play was suspended with GB 2-1 up against Mexico and two matches left.

The 24 year-old from Leicester managed to remain unfazed, and after a difficult start overcame doubles world top 50 player Giuliana Olmos 6-4 6-1 with her powerful brand of baseline tennis. 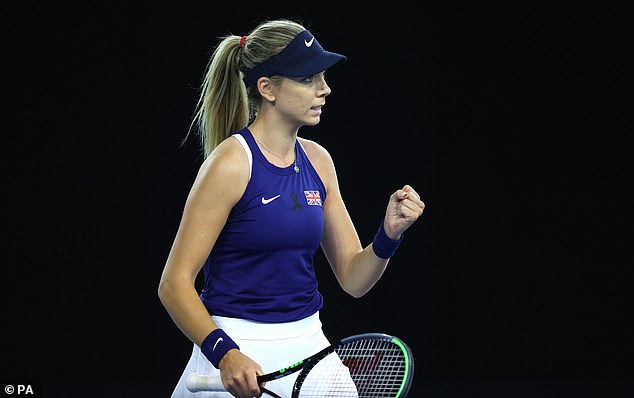 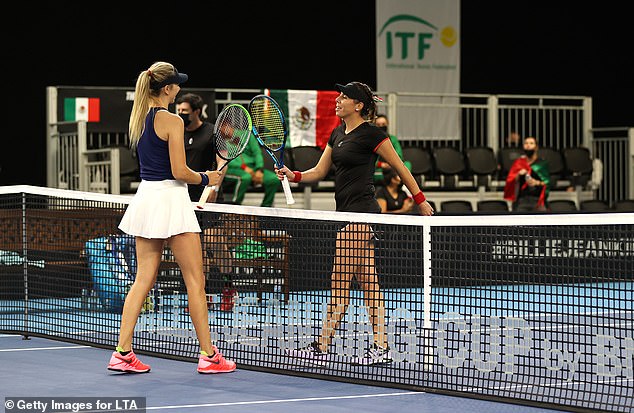 Her victory at Roehampton’s deserted National Tennis Centre meant that in this World Cup of women’s tennis GB are now through to next February’s main qualifying round for the April finals week.

Boulter spent the time composing herself before producing the kind of level that ought to see her back in the world’s top 100 after the back injury that had stopped her previous progress.

‘I didn’t do anything between three and four o’ clock,’ she said of the hiatus caused by the royal funeral. ‘I spent a bit of time on my own. It’s easy to overthink but in tennis you have to be flexible. I’m proud of the way I came out and played.’

She has now amassed an impressive 9-1 record when representing GB in the competition.

Watson is a loyal servant in national colours but had played an uncharacteristically poor match to inject some tension into the overall tie.

Repeatedly slapping the ball into the net against a solid baseline opponent, this time she failed to recover from a slow start and ended up being beaten 6-3 7-6 by Marcela Zacarias, ranked a falsely low 285. 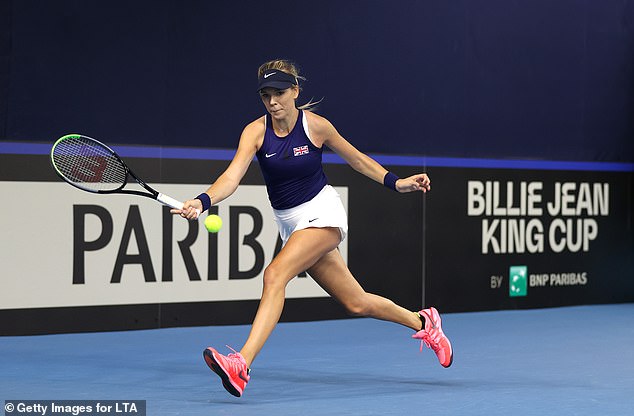 At the Monte Carlo Open Dan Evans came into yesterday’s semi-final having won only nine games in two matches versus world number five Stefanos Tsitsipas. Against a player with a multi-dimensional game, was comfortably seen off 6-2 6-1.

After an outstanding singles run in which he beat four high class players, including world number one Novak Djokovic, the 30 year-old Midlander has equalled his career-best ranking of 26 with the promise of more to come.

In the case of the doubles that will arrive quickly. He later made the final alongside Liverpool’s Neal Skupski when they beat top seeds Juan Sebastian Cabal and Robert Farah 7-6 2-6 10-4.

‘ I haven’t ever felt really tired, to be honest, on court. I just got out-classed today,’ said Evans of his singles. ‘I’ve just been really enjoying being out there playing, having a battle.’

If he can improve his performances in the Grand Slams a top twenty place should beckon, even at a time when ranking measures mean moving up is more difficult than usual.

Evans has not been home since travelling to the Australian Open in mid-January and is resigned to not coming back until after the French Open.

‘I’ll play as much as I can,’ he said. ‘ It becomes tricky to go home with track and trace on the plane. It’s not straightforward.’

Unlike in previous rounds the Evans serve was below standard yesterday and the Greek had too much all round game for him. He will meet the surging Russian Andrey Rublev in today’s final.

The man Evans overtook as GB men’s number one, the slightly forgotten Kyle Edmund, has undergone a minor operation on his left knee which he hopes will solve a problem that has been troubling him for around 18 months.

The ‘small procedure’ took place in Switzerland and 2018 Australian Open semi-finalist Edmund, who last played in October, hopes that it will enable him to come back for the grass court season in early June.