Judd Trump has never looked like your conventional cueman.

Whether it be his metal-spiked shoes or diamond-encrusted watch, his old boyband haircut or current crossover bow tie, the Bristolian has long been defying snooker’s stuffy image and dated dress code.

Now, though, he wants to rip up the rulebook altogether. The world No1 sees a sport that is stuck in the dark ages and neglecting the next generation. He believes it needs radical reform – and that first means ditching the dickie bows and tossing away the waistcoats. 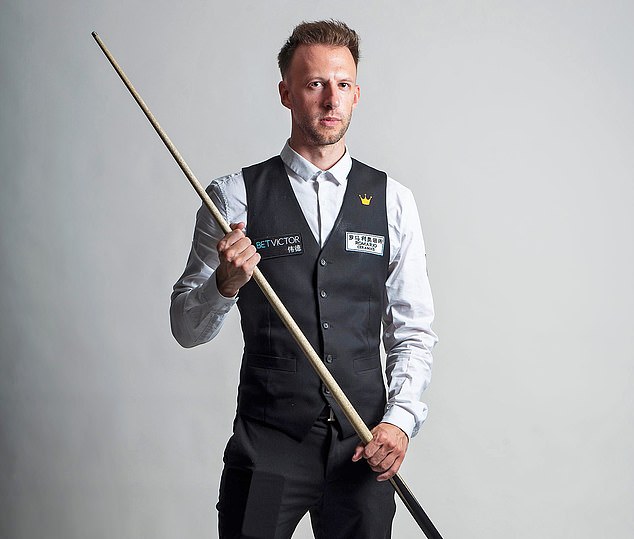 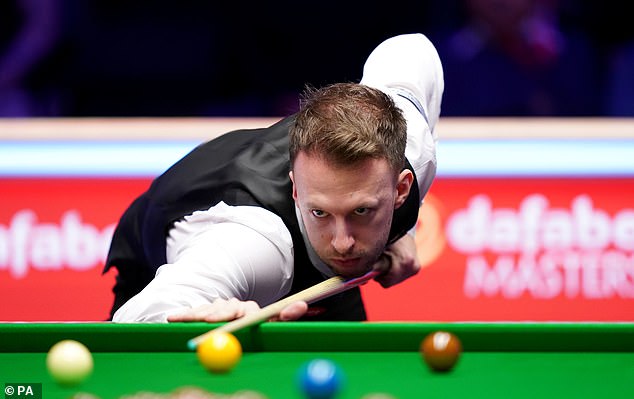 ‘I’ve always thought the dress code is outdated and it’s time to move on and make it more relaxed,’ Trump tells Sportsmail ahead of the World Championship, which starts on Saturday.

‘It should still be smart but maybe with polo tops instead. In other sports, you practise in what you would wear to compete, but in snooker you don’t walk down the snooker club in a three piece-suit.

‘I find it odd. People don’t really want to walk around in waistcoats. It’s just not cool any more. It is one of the only sports where your dress code is hampering what you do. By wearing bow ties, they get in the way.

If Judd Trump wins at the Crucible he will join this exclusive club of players that have won the World Championship more than once:

‘I’m trying to look into the future and snooker is getting left behind other sports. It’s always been aimed at that certain age group but there’s going to come a time when that age group leaves and there’s no one behind them.’

For Trump, it is not just the dress code that needs freshening up, but also the commentary box. ‘Most of the stories in the commentary box are from the 1970s or 1980s,’ says the 31-year-old. ‘It’s something I can’t really get my head round. It’s so out of date and it’s hard for the younger generation to resonate with their stories. There’s not enough excitement and passion.’

Nostalgia has certainly dominated the build-up to this year’s Crucible tournament after seven-time world champion Stephen Hendry was drawn against six-time runner-up Jimmy White in qualifying.

Hendry beat his old rival in a low-equality encounter, but then lost his next match, while defeat for White meant he dropped off the tour, only to be then awarded an invitational tour card.

‘Jimmy has done loads for the game, but after giving him one or two chances already, there has got to be a cut off at some point and maybe it could have been the right time for him to hang up his cue and give someone else a chance,’ says Trump.

‘I think there should be a similar approach to golf, where if you have won the World Championship you get invited back to that tournament each year, rather than a full tour card.’

Another change Trump would make is bringing in shot clocks in more tournaments to speed up play. ‘I know everyone is trying to win in their own way, but it is entertainment as well,’ he says.

‘Tennis has a shot clock for in between serves. Snooker is again a little bit behind. There’s a few things here and there that can help bring the sport into the 21st century.’

It was 10 years ago that Trump first broke through and reached the World Championship final as a 21-year-old, famously spending his prize money on a £110,000 Ferrari Spider.

Back then, he pitched himself as ‘part-time snooker player, full-time international playboy’ on his Twitter bio and, when once asked what his idea of fun was, he replied: ‘Driving around in a supercar making as much noise as possible – getting as much attention and as many people looking at me as possible.’

‘Yeah, that sounds like something I’d say then,’ laughs Trump when reminded of that comment from a decade ago. ‘It was fun at that time. It was just nice to be winning that kind of money and when you’re a kid it’s a wild dream to drive a Ferrari.

‘You’ve just got to look back at it and laugh. Even my haircuts back then, it all seems cool at the time. But I’m glad I did what I did because you can get to 40 and wish you’d done things. I enjoyed myself off the table.’ 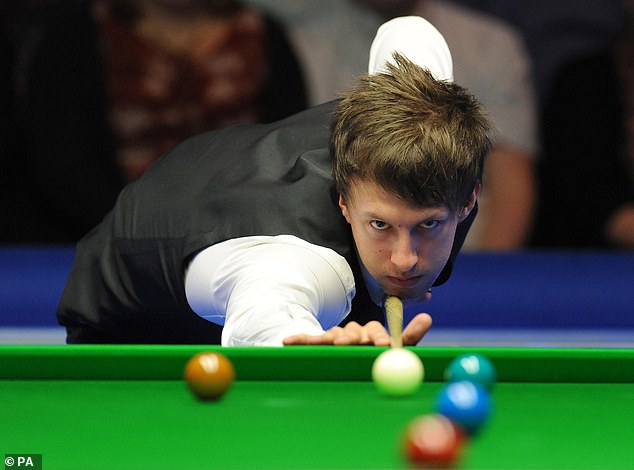 That’s not to say that Trump does not enjoy himself off the table now. He is still single, drives a BMW i8 supercar and is planning a lads’ trip to Las Vegas – Covid restrictions depending – if he adds a second Crucible title to the one he won in 2019. The difference between the Trump of 2011 and 2021, then, is not his idea of fun – but just knowing when to have it.

‘We skipped Vegas last year but hopefully this year we will be able to make up for it, hopefully after winning another World Championship,’ admits Trump, who is auctioning off his lucky Louis Vuitton match shoes after the Crucible to raise money for the children’s hospice charity he supports, Jessie May.

‘Nowadays it is not so much the material things, but just getting away with friends and having a few wild nights out and then you can get back to work. It’s still important for me to enjoy myself but as I’ve got older, I know the right times and that’s the end of the season rather than in between tournaments. I’ve managed to get that perfect balance.

‘When you’re a young kid coming through, you kind of think your career is going to last forever. But over the past couple of years, I’ve matured and realised life goes so quickly, it’s important for me to take every opportunity I possibly can.

‘The fancy things off the table are not what’s spurring me on. It’s just about winning. I want to become more of a machine and win every single match and tournament I play.’ 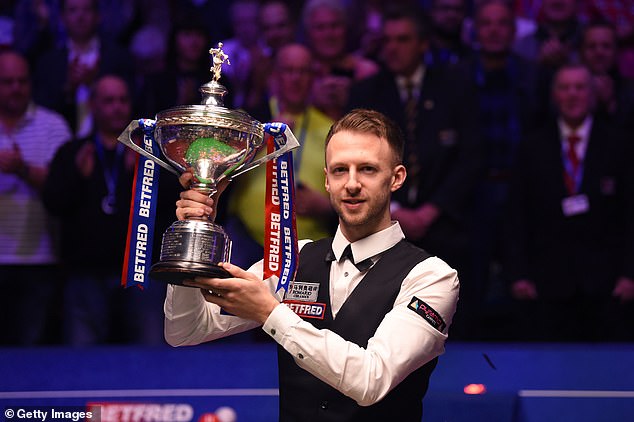 Trump won the 2019 World Snooker Championship, his first ever win at the Crucible

He is certainly making a good fist of that, with five tournament wins to his name this season after a record six last term. Trump now has 22 ranking titles and is joint fifth on the all-time list. Only Steve Davis, John Higgins, Stephen Hendry and Ronnie O’Sullivan, who tops the list with 37, are above him.

‘I didn’t think I’d ever get close to 37, but I’ve won so often in the last couple of years that it’s crept up on me quickly and I’m not actually that far behind now,’ says Trump. ‘But until you get to three, four or five World Championships, you are never going to be in contention with Hendry and O’Sullivan so there is still a lot of work to be done.’

To be considered the best of all time, O’Sullivan recently claimed Trump must win 70 ranking titles given the number of tournaments that are now played in a calendar year.

‘He puts me up and puts me down at the same time,’ says Trump about the six-time and defending world champion, who he leads 15-13 on their career head-to-head. ‘He’s careful with what he says because he wants to be looked at as if he is the best player ever and at the moment he probably is until I get close to his record.’

The Crucible’s top two seeds were also embroiled in a war of words on the eve of last year’s delayed tournament, with Trump branding O’Sullivan ‘selfish’ for complaining about the return of crowds.

So what is their relationship really like? ‘It’s actually pretty good,’ insists Trump. ‘He’s always one that’s enjoyed the headlines and some of the stuff he says, he generally doesn’t mean it. I don’t think he thinks before he speaks most of the time.

‘I have got a great rivalry with him and I want him to stay in the game for as long as possible. I love playing him and he’s one of the only players I enjoy watching.

‘Hopefully we can meet in a final. This year we are in separate halves of the draw and it would be really, really special, probably one of the most watched finals ever, if me and Ronnie could get there. It would be amazing for snooker and maybe bring in different kinds of fans.’ 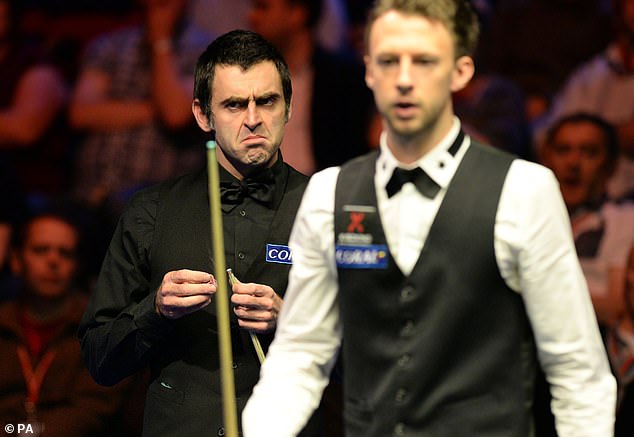 That final would also be played in front of a capacity crowd, as the Crucible has again been chosen as a Government test event for the safe return of spectators. The Sheffield arena will be a third full for the first round, before capacity increases to 50 per cent for round two, 75 per cent for the quarter-finals and semis and then a full house will be allowed in for the final.

‘The prospect of getting through the tournament and having 100 per cent capacity for the final, there is a bit of extra motivation for everyone this year,’ adds Trump, who faces qualifier Liam Highfield in his first-round match on Tuesday.

‘Even though I’ve been winning tournaments, that excitement hasn’t quite been there without the fans. You can feel very flat. I think having that extra edge for this tournament is what’s going to bring the best out of me.

‘I want to get to the end my career and have won the World Championship multiple times. But I am also going to try and play my own style, with my own identity, and do whatever I can to make it as attractive to younger players as possible.’ According to Trump, it is time snooker started doing the same.