It was September 2005 when Roberto Soldado scored his first-ever European goal, nodding in David Beckham’s cross for Real Madrid against Olympiacos.

If he scores against Manchester United on Thursday night it will be just as sweet – 16 years have taken none of the enthusiasm from the Granada striker.

Perhaps when he finally finishes playing in Europe his old team-mate Beckham can take him to Miami? 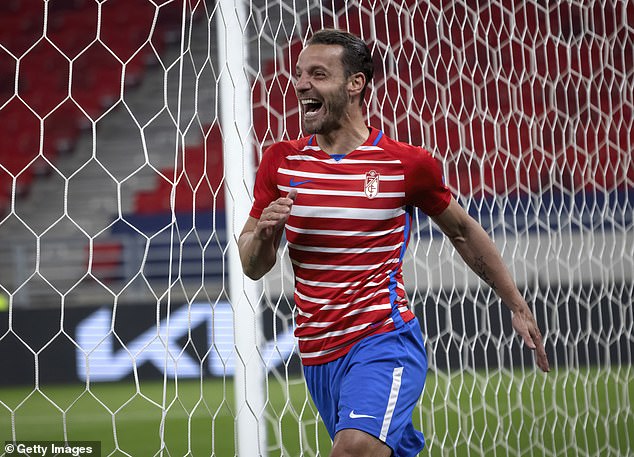 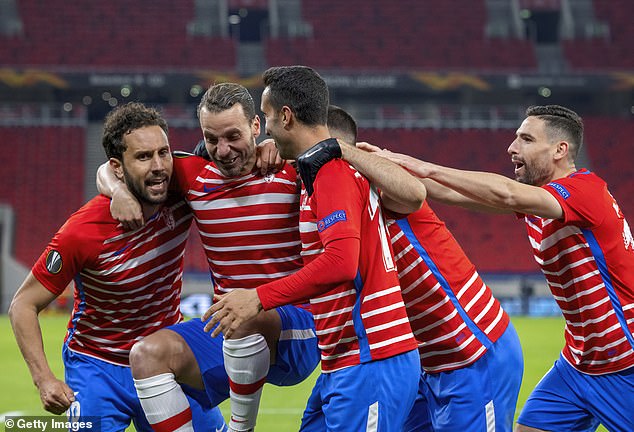 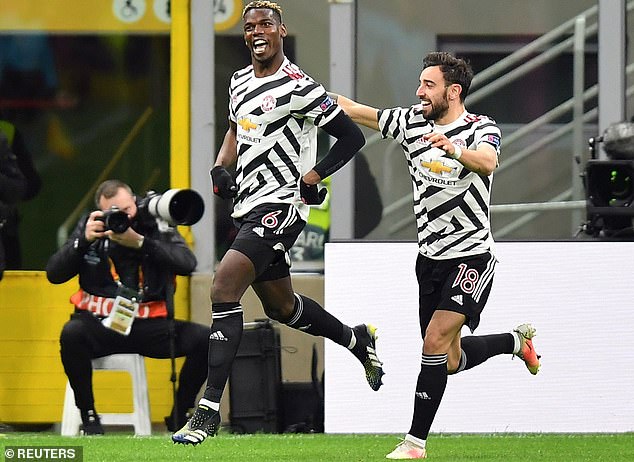 ‘My legs won’t hold out that long,’ he says from Granada’s training ground in the build-up to the biggest game in the club’s history.

Granada are as surprised to be here as Soldado. ‘It’s been so many years since that first European goal,’ he says.

The former Tottenham forward is one half of the oldest strike partnership in La Liga. The club signed Jorge Molina in the summer. He’ll be 39 at the end of this month.

‘I was delighted that I wasn’t going to be the oldest player in the team any more,’ Soldado laughs.

It’s usually one or the other who leads the line but when they both play they give 32-year-old coach Diego Martinez almost 75 years of experience. 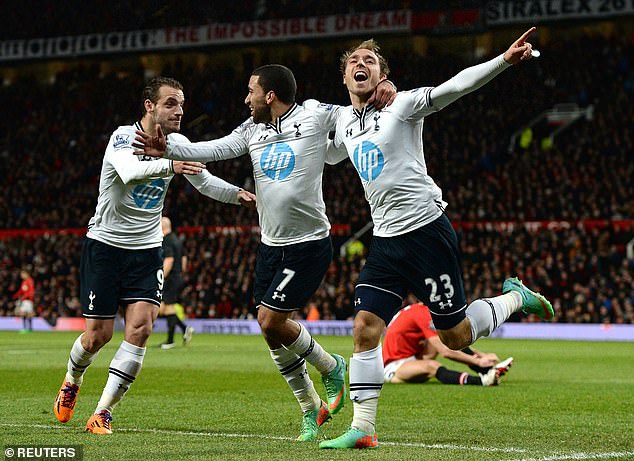 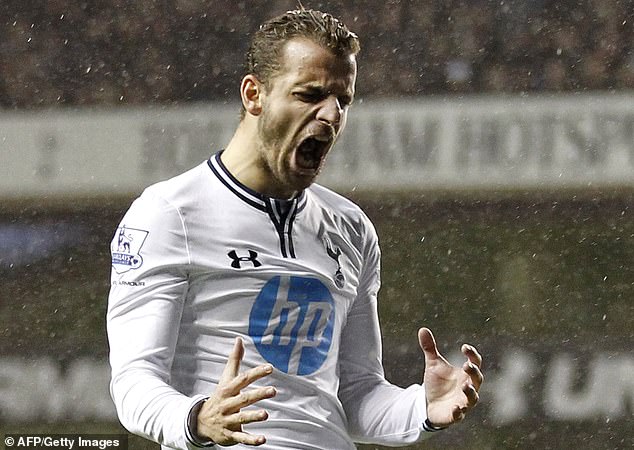 But this was a more typical scene of Soldado at Spurs, after 16 goals in 76 appearances

Soldado always said there would be life after Madrid when he left the club in 2008. His two-season spell with Spurs from 2013 included a win over Manchester United at Old Trafford on New Year’s Day. Does he remember the game?

‘It’s a hard one to forget!’ he says. ‘Because I had been home alone on New Year’s Eve.’

The Spanish take December 31 just as seriously as the rest of the world and with the added ritual of eating 12 grapes on the 12 strokes of midnight with friends and family.

‘Because we were playing January 1 at midday I said to my wife: ‘I’ll be going up to Manchester on the 31st for sure so you go to Spain to be with the family.

‘She went two days before and then the coach said we were going to travel on the day of the game, so we could have spent the night together after all. I couldn’t believe it. We ended up eating the grapes on opposite ends of a video call. 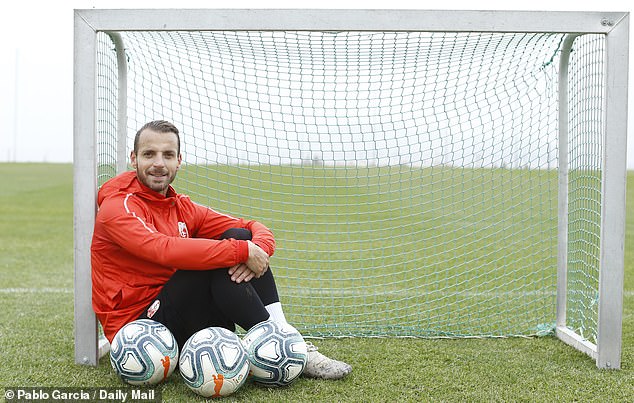 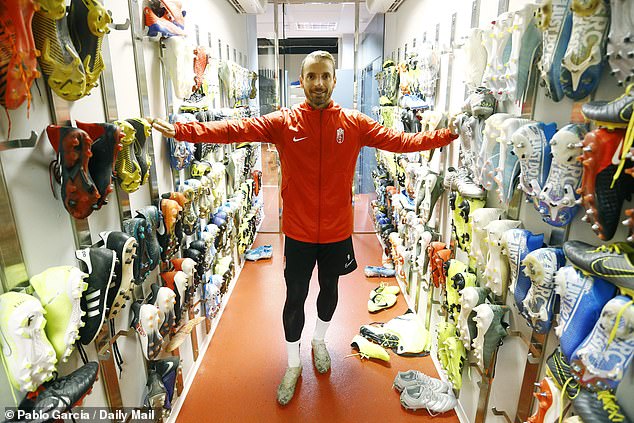 Granada have specialised in overcoming the odds this season, whether more fancied opposition or an outbreak of Covid-19 within their camp

‘It was a disaster! But it was worth it because the next day we won at Old Trafford.’

Manchester United have already got rid of one Spanish team this season, beating Real Sociedad 4-0.

Granada don’t have Real Sociedad’s fine tuning but they are a durable diesel of a side managing to finish seventh last season when many tipped them to go down.

This year they have coped admirably with their 47-game marathon despite being hit so hard by coronavirus positives earlier in the season that they almost lost a game against Real Sociedad by default for not being able to field enough players.

Soldado’s recovery from the virus coincided with that desperate search for the numbers that would help them fulfil the fixture.

‘I suffered the virus at the end of October and November,’ he says. ‘I was down in the basement of my house, totally isolated from my family for twenty days. 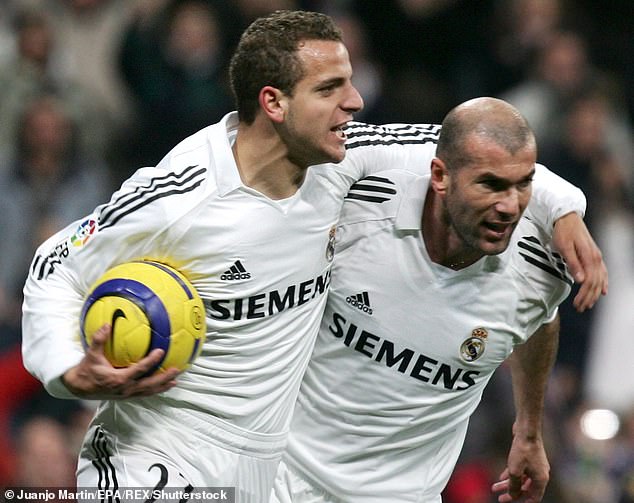 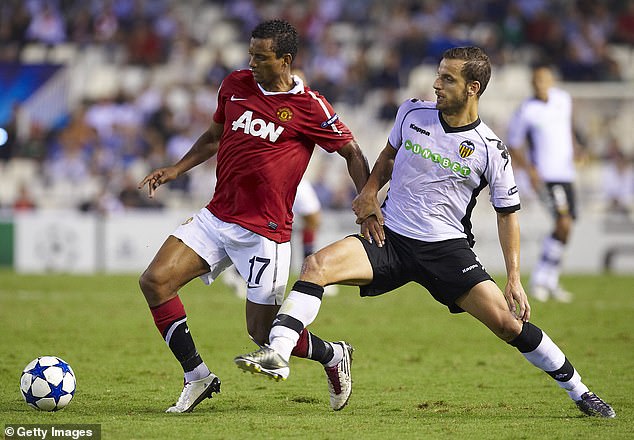 ‘I passed a second negative PCR on the Thursday, I came in on the Friday to do a bit of gym work and on that Saturday they told me I had to travel with the team.’

‘I lost my sense of taste and smell when I had the virus and afterwards I found it a bit harder to recover after training sessions.’

The weight of games, injuries and illness have taken their toll on the squad and there were tears in the dressing room after they saw off Napoli in the first knockout round despite conceding an early goal and losing three players to injury in the first hour.

‘Some of our players were struggling. They shouldn’t have been in the squad, let alone on the pitch. But there were no alternatives. 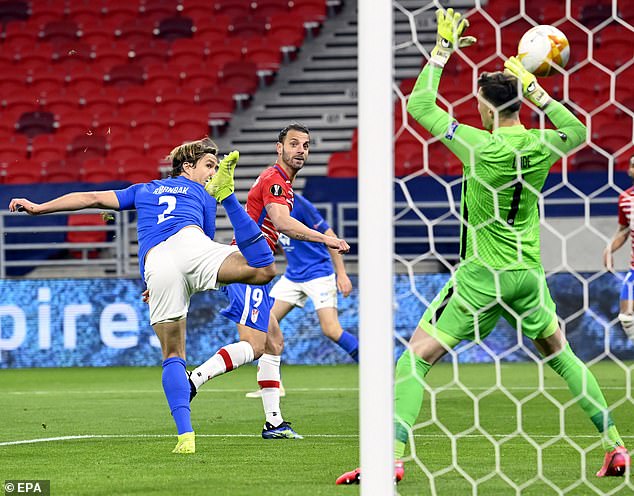 ‘The sacrifice we’re all making is enormous, because if we can play even only 10 minutes, we say so, the manager knows that.

‘I remember one of the team doctors was emotional [after the 3-2 aggregate win]. It’s the accumulation of so much responsibility. He was crying in the dressing room.

‘The day against Napoli was a case of whoever can help will help. We’re all in it together. That complicity is what has brought us here to Europa league quarter-finals, which was unthinkable for us.’

Unthinkable for Granada and for Soldado too who joined them at the start of last season with the idea of just eking out one more year in the top flight.

‘My expectations have been overcome by miles,’ he says. ‘All I wanted to do was to avoid relegation. That was the objective here. And now we’re going to play a Europa league quarter-final.’ 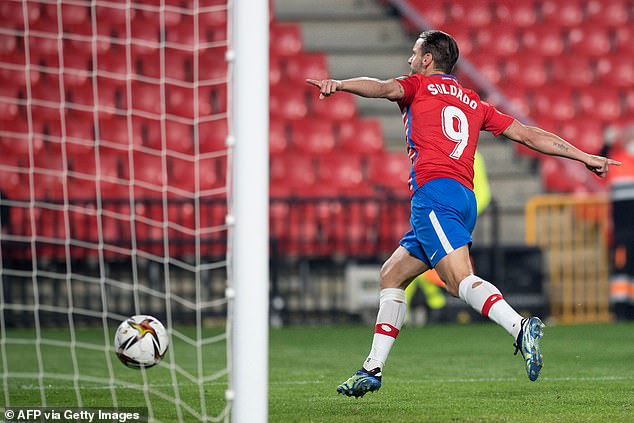 That’s his message for Thursday night too: ‘Although we’re the smaller team the ambition is of a big team. That’s the mentality we need if we are going to knock out United.

‘We have to enjoy it and see where our level can take us. If they’re better than us, then fine. But we will compete. I’m convinced of that.’