At least there was one happy Spaniard in the Estadio Nuevo Los Carmenes, David de Gea’s return in goal coinciding with another good night in the Europa League for Manchester United.

De Gea’s clean sheet on his first appearance since February and two away goals mean United can already look forward to a place in the semi-finals having lost in the final four of this competition to Sevilla last season.

Marcus Rashford became the first United player since Wayne Rooney 11 years ago to score 20 or more in back-to-back seasons, and Bruno Fernandes added a rather fortuitous late penalty to all but end the Granada fairy tale. 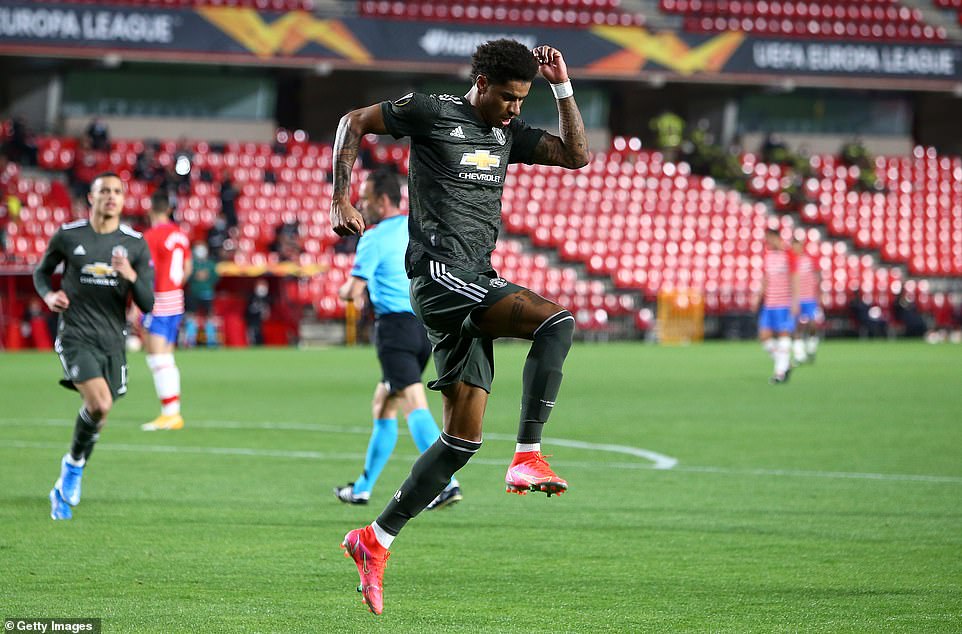 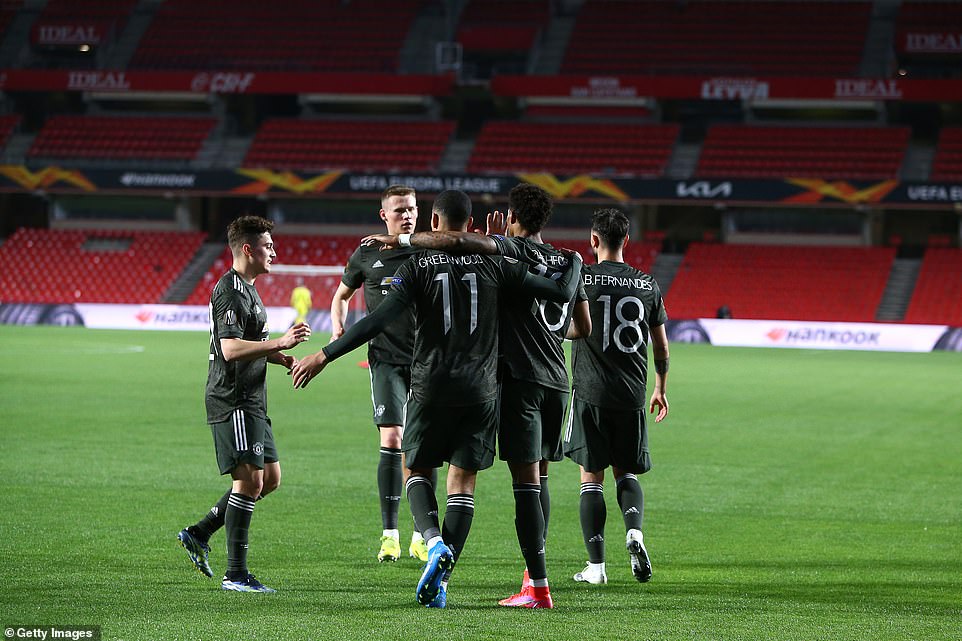 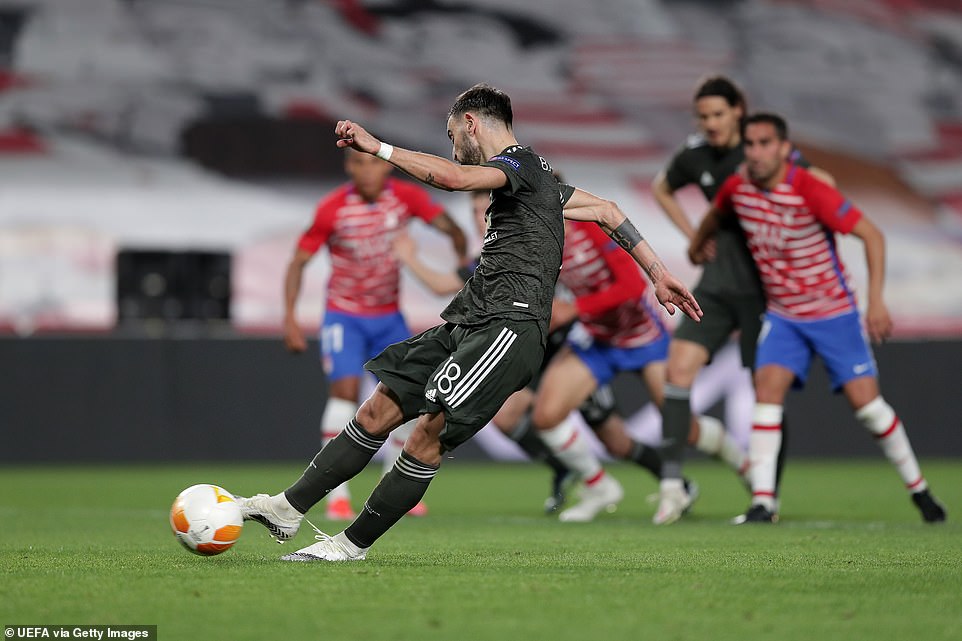 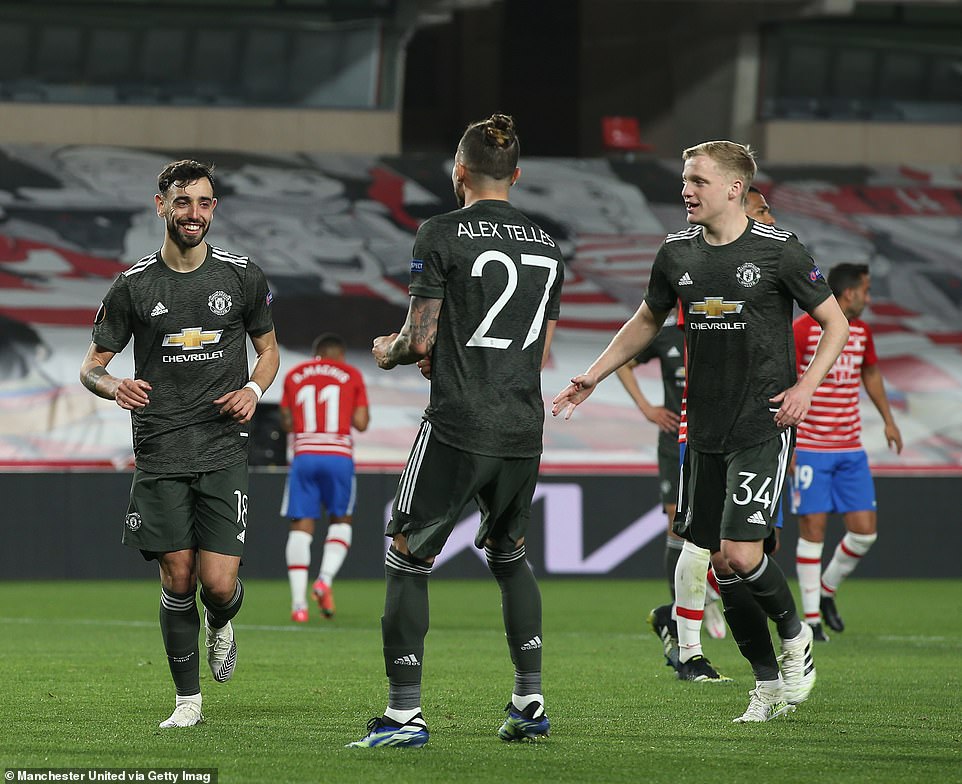 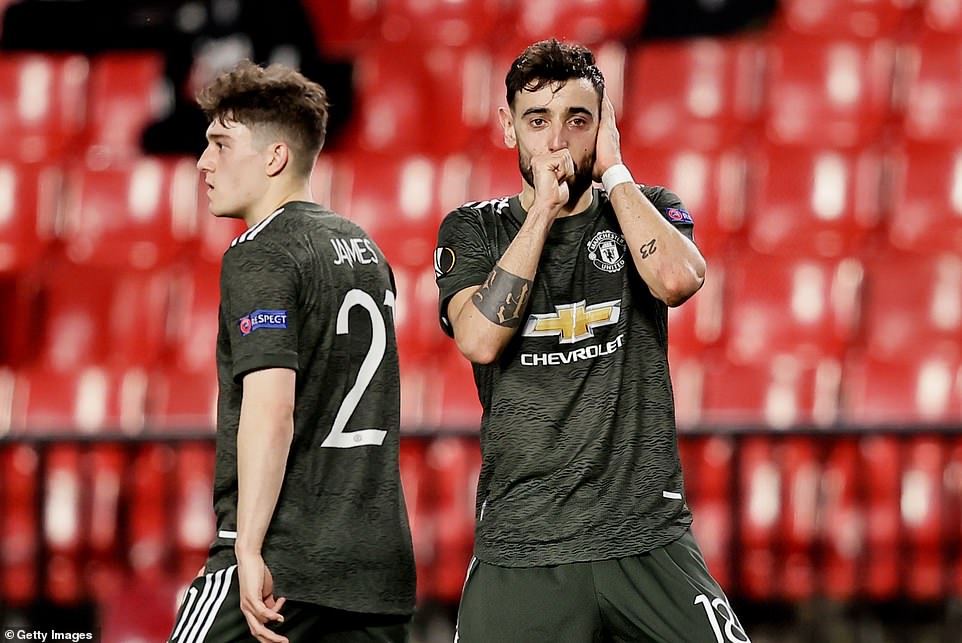 A team lying ninth in La Liga have been punching above their weight throughout a maiden campaign in Europe, knocking out Napoli en route to the quarters, but surely now it’s a step too far.

This was the biggest match in their history – hence the thousands of fans who greeted the team bus outside the stadium – but it’s hard to see how they can turn this tie around in the second leg at Old Trafford next week even though United picked up five yellow cards on Thursday night and will be without Harry Maguire, Scott McTominay and Luke Shaw through suspension.

Ole Gunnar Solskjaer refuses to see it that way, of course. His job is not to count chickens.

‘It’s not a perfect night for us,’ said the United boss. ‘I’m delighted with the result, of course, but I don’t think we deserved five yellows.

‘Football catches you so quickly if you rest. We can’t have any other approach than going forward and creating chances and score goals, especially at Old Trafford.’

A Granada side that cost £7million to put together produced a typically spirited performance without ever really stretching De Gea.

The Spaniard’s return in goal was his first appearance in eight games and 39 days since simultaneously becoming a father and losing his No.1 spot to Dean Henderson.

Given that Solskjaer usually plays his second-choice keeper in the Europa League – at least until the semi-finals, on the evidence of last season – it could also be seen as something of a back-handed compliment. 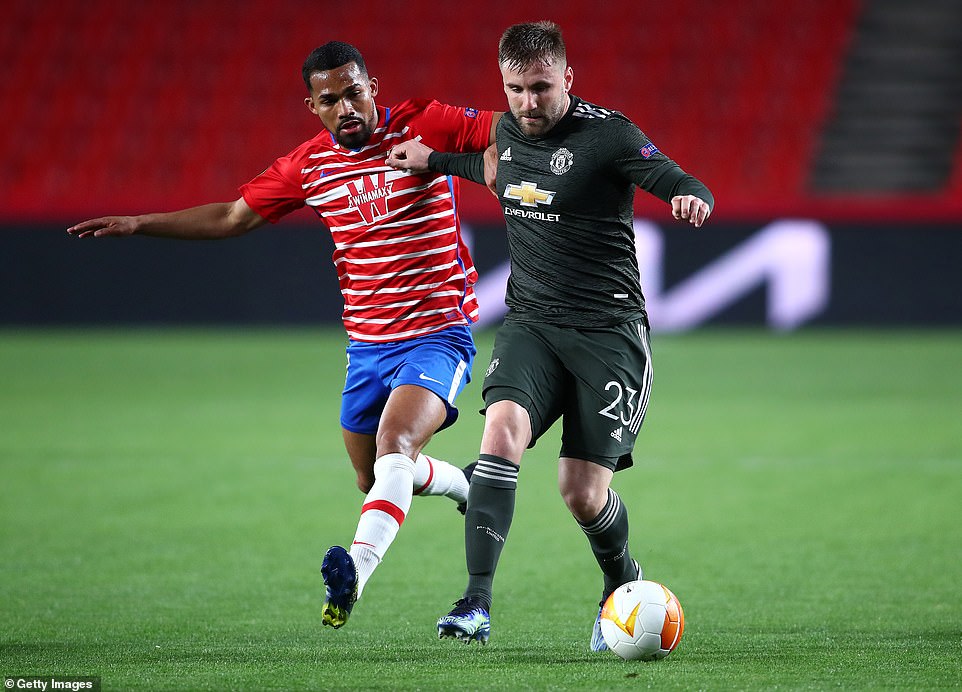 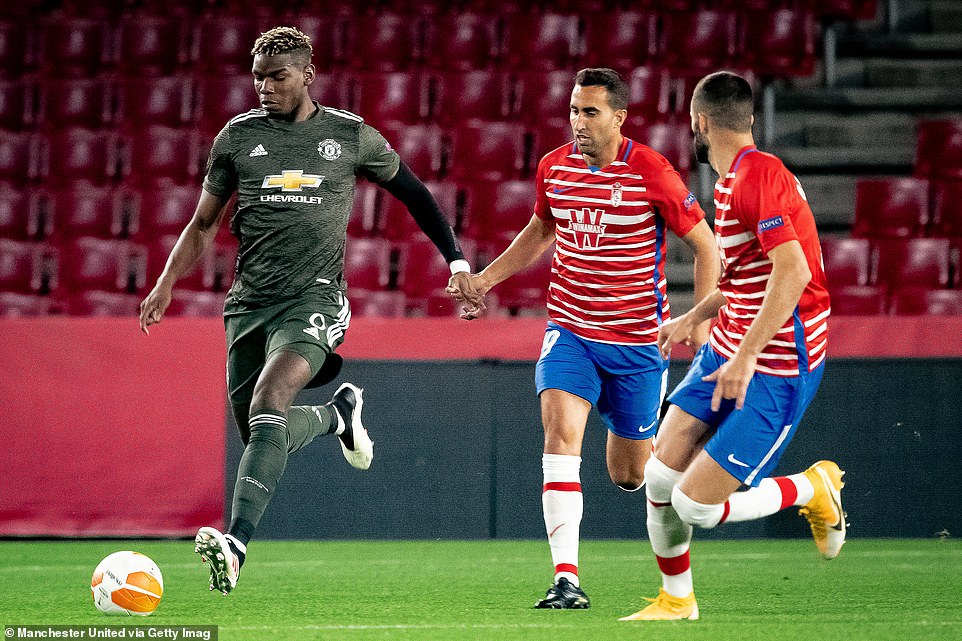 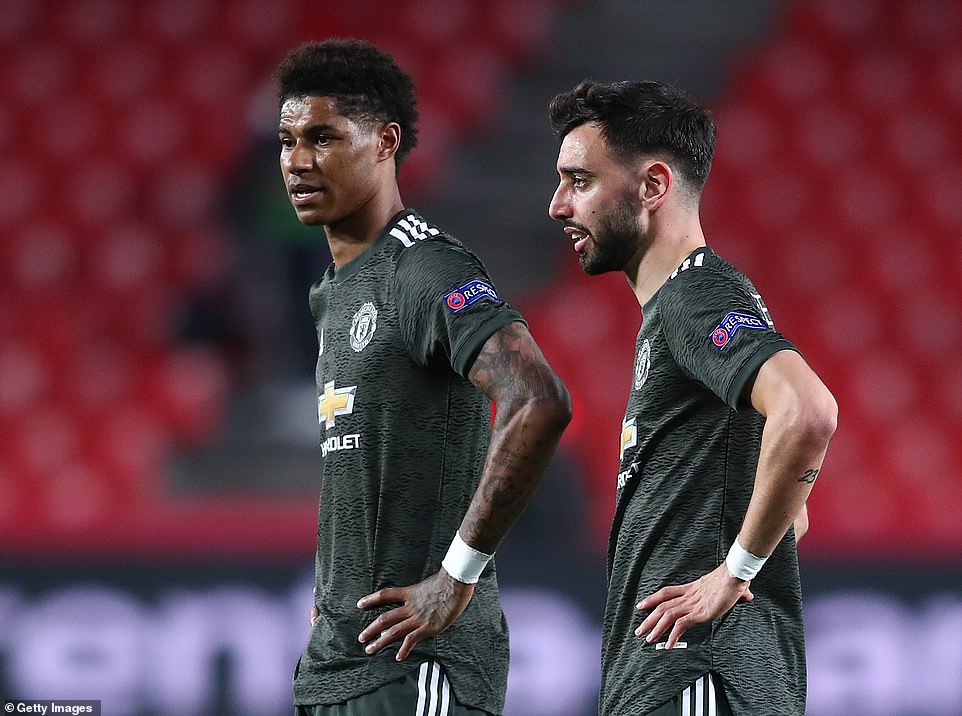 Goalscorers Rashford and Fernandes stood poised over a promising free-kick, but the effort was blasted over the crossbar

He also started Rashford despite saying he was not a ’90-minute-man’ for this one due to a persistent ankle injury that the Granada players appeared to enjoy targeting.

It was clear within the first five minutes that Rashford wasn’t moving well – certainly not as freely as a male streaker who managed to get onto the pitch – yet the England man recovered sufficiently to have United’s first two shots on goal before scoring their opening goal just after the half hour mark.

Until then, Granada had been careful not to make the same mistakes as Real Sociedad in a 4-0 home defeat to United in the last 32 by defending high up the pitch and offering the Premier League side space in behind.

But when De Gea played the ball out to Victor Lindelof, he spotted an opportunity to launch an excellent long ball for Rashford as he peeled away from Domingos Duarte.

Rashford produced an exquisite touch to bring the ball under control with his right foot and steadied himself before sliding a shot past Rui Silva. 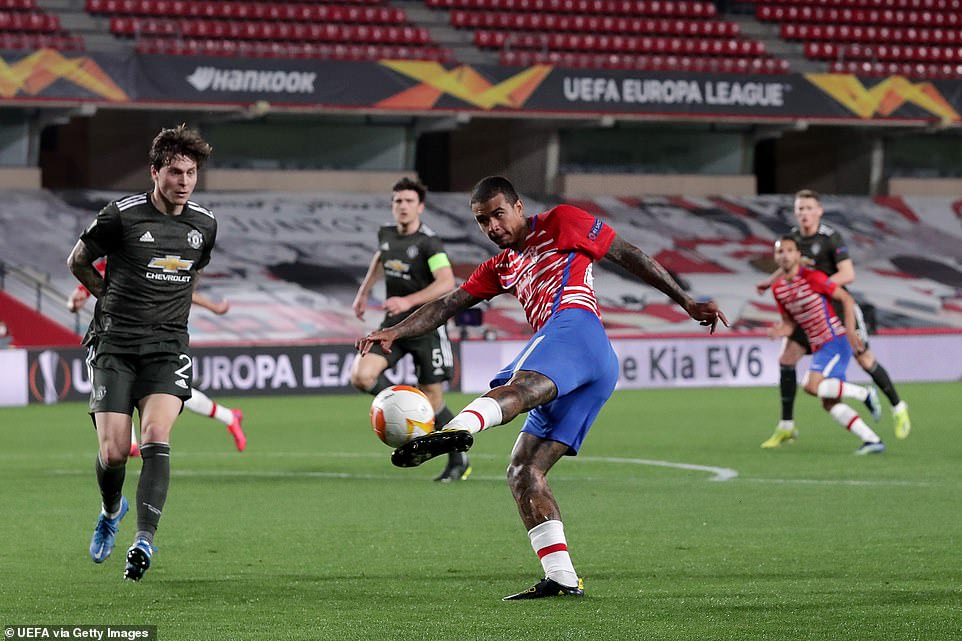 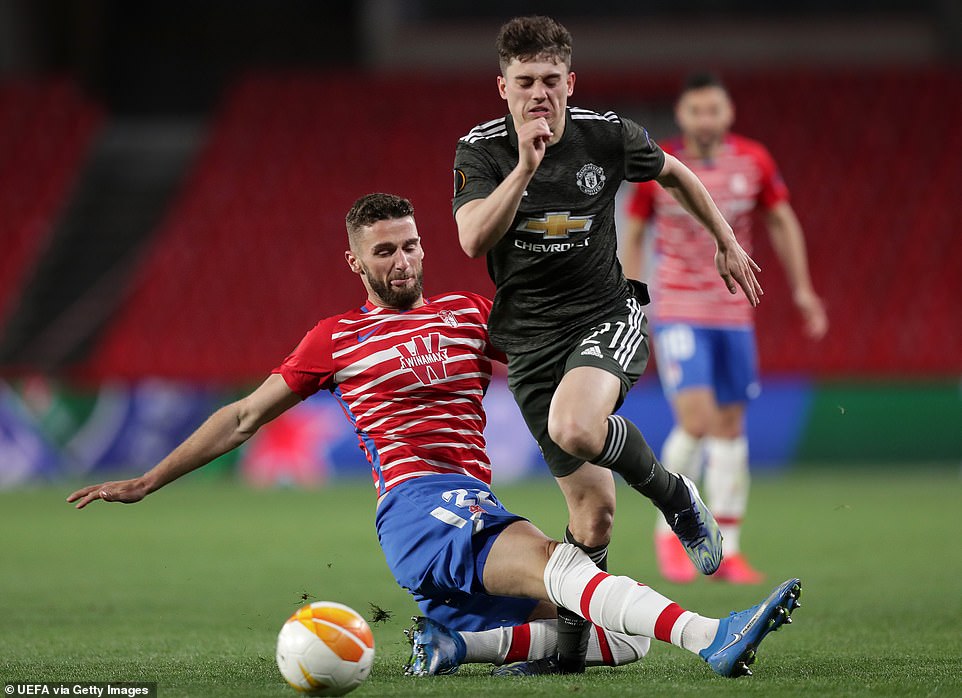 Daniel James was clattered in a challenge by Domingos Duarte, who was forced off after picking up an injury after the blow 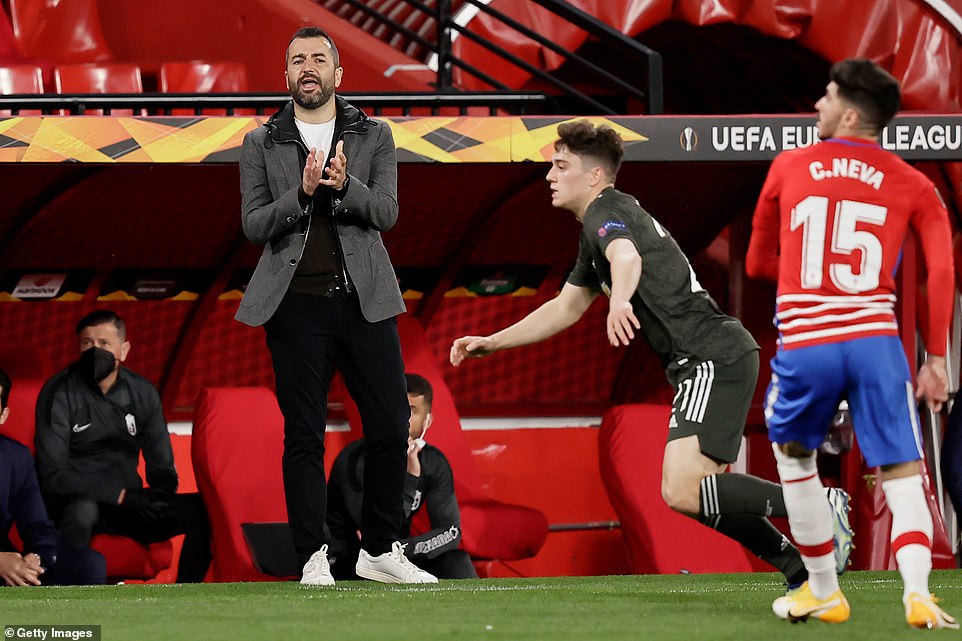 The goal came just as Granada were starting to grow in confidence, even though Kenedy – on loan from Chelsea – volleyed high into the empty stands and former Tottenham striker Roberto Soldado’s effort from a tight angle was always going into the side-netting.

Yangel Herrera, on loan from Manchester City, also volleyed against the outside of De Gea’s left-hand post after the goal and the United keeper made a string of comfortable saves from Kenedy’s long-range efforts.

If that makes it sound like the Spaniards were on top, they weren’t, even though Paul Pogba, McTominay and Shaw were all booked by Portuguese referee Artur Dias in the first half, and Maguire and Nemanja Matic were cautioned in the second period.

For all the yellow cards, this was a disciplined display by United and one that brought a second goal in the 90th minute.

Fernandes went down after taking an innocuous looking hand in the face from substitute Yan Eteki and picked himself up to score from the spot even though Silva should really have saved it. 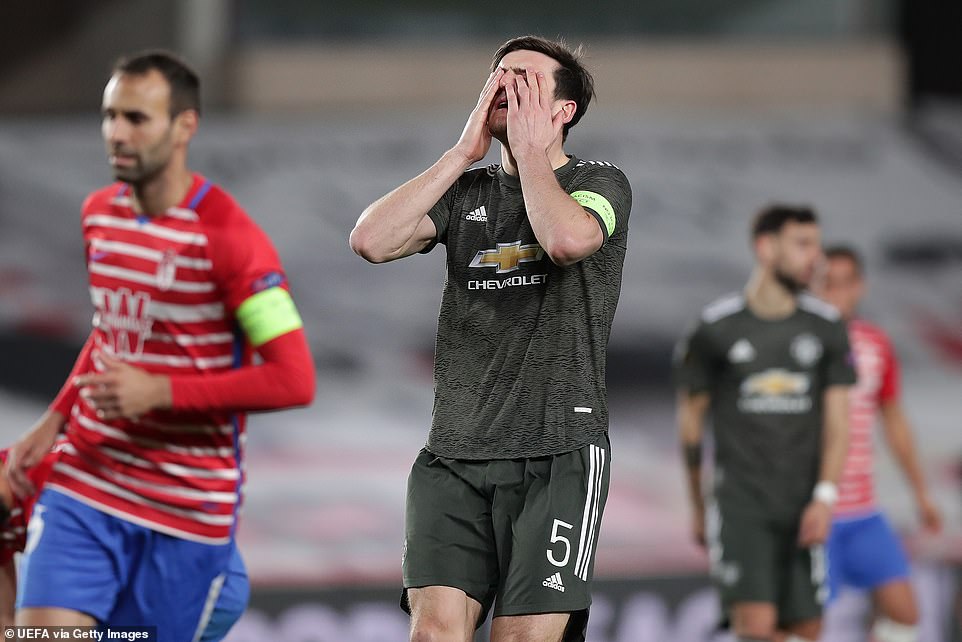 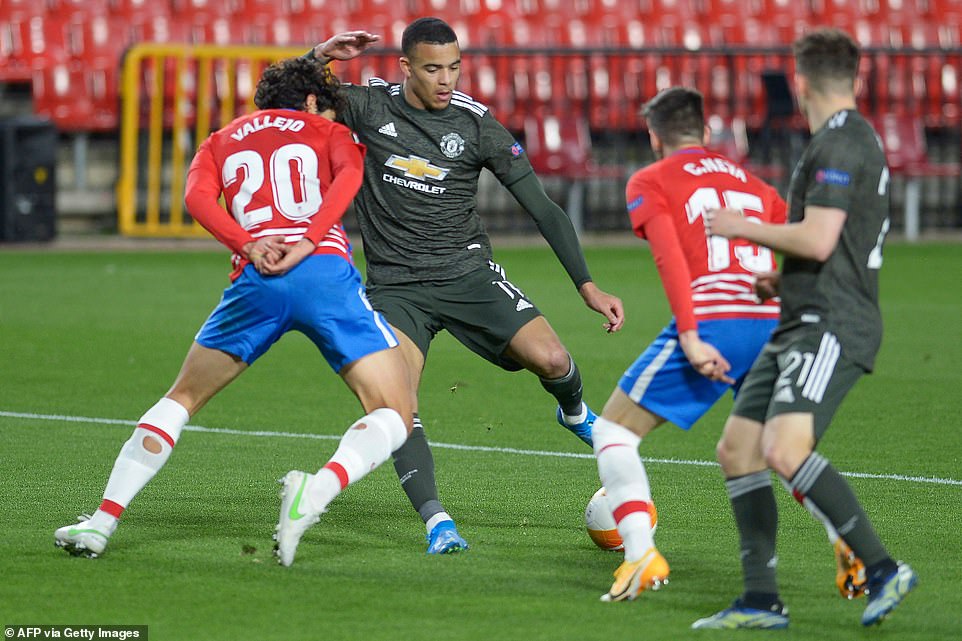 Was it a penalty? ‘I’ve just seen his eye when he came off and it’s red,’ said Solskjaer. ‘To score with one eye open is also a skill.’

Given that Solskjaer usually plays his second-choice keeper in the Europa League – at least until the semi-finals, on the evidence of last season – it could also be seen as something of a back-handed compliment.

‘David is a fantastic keeper,’ said the United manager before kick-off. ‘I was thinking that I’m sure he’ll want to prove to his fellow countrymen how good he is. You’re probably going to see him more often as well.’

Solskjaer also started Rashford despite saying he was not a ’90-minute-man’ for this one due to a persistent ankle injury that the Granada players appeared to enjoy targeting. 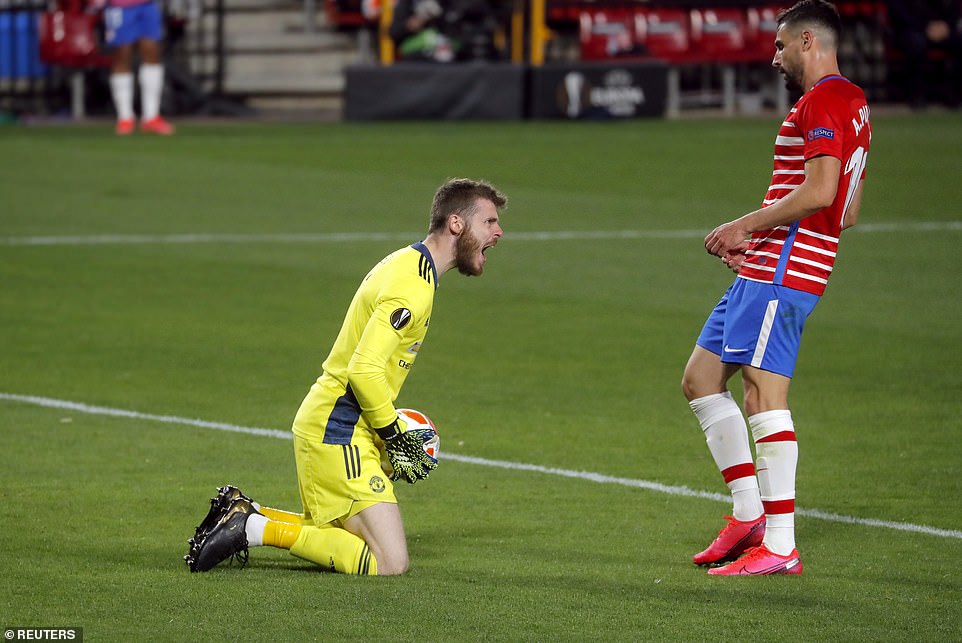