A recent Fortnite leak suggests that three new weapons will be coming to the Primal-themed Season 6.

The weapons meta in Fortnite Season 6 has seen a huge shift because of the primal-themed biome. Mechanical and Primal weapons have taken over, and this new shift has received mixed reviews from fans and pros alike.

There is a chance that these are scrapped Mythic weapons but maybe we can see them in a future update? 🤔

Thanks @FN_Assist for noticing this!

Epic Games recently introduced the Mythic Recycler with v16.20 and players can acquire it from the Spire Assassin. They also vaulted the overpowered Mythic Primal Shotgun.

The upcoming mythic weapons will also be added soon, and if leaks are to be believed, they will be safeguarded by the Spire Assassin.

This article will discuss all the mythic and exotic items present in the game files and will appear later on in Fortnite Season 6.

When are the new mythic weapons coming to Fortnite Season 6? 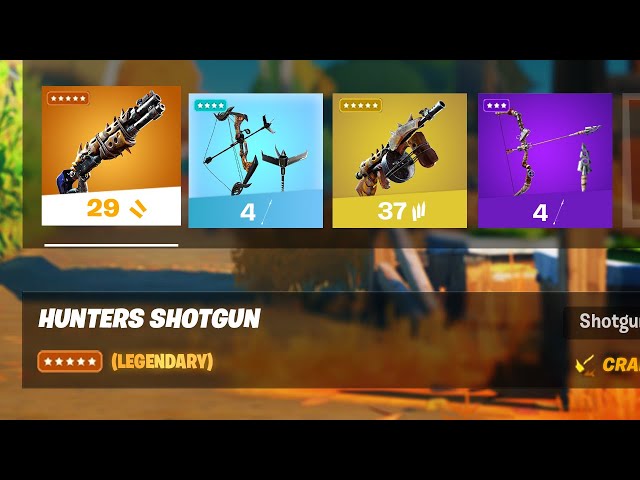 Epic Games follows a simple strategy when it comes to adding new weapons. They do it with every major update, and this keeps the game fresh.

For instance, the Mythic Recycler was added in the Fortnite v16.20 update. Hence, it is likely that the next set of mythic weapons will arrive in v16.30 and v16.40, respectively.

Since these guns are the best in Season 6, fans have requested the publisher to add more mythic weapons to big areas with henchmen like The Agency or Fortilla.

Popular YouTuber Home of Games mentioned these fan requests in his recent video, as he discussed the two upcoming mythic weapons in Fortnite Season 6.

He mentions that Fortnite Season 6 is going to get its first brand new Exotic weapon with the next update. The location for this exotic weapon will be Stealthy Stronghold. The NPC Lara Croft will be selling the first exotic Grappler Bow, which was teased in the battle pass trailer.

The lack of sniper rifles in Fortnite Season 6 has forced a bow-based meta in-game. Players looking to headshot opponents with their weapons will now have to try it with Bows.

However, a new Bow is in the works, which might solve the sniper problem in Fortnite Season 6.

In a recent maintenance update, Epic Games increased the headshot damage multiplier for Bows in Fortnite Season 6. This particular change has encouraged players to take up the weapon and try their luck with it.

The weapon in question is none other than the Splinter Bow, which deals 100 damage to enemies. According to YouTuber House of Games, this weapon has the potential to one-shot opponents easily. Players can use this weapon as a sniper rifle to aim for headshots.

The Splinter Bow has the following stats for Fortnite Season 6:

The third weapon is the Mythic Primal Rifle, which was teased by data miners on Twitter. This weapon is speculated to be arriving in Fortnite Season 6 after the v16.30 update.

The damage and recoil stats for the weapons were leaked on Twitter as well. The Mythic Primal Rifle will deal 38 damage to opponents with a recoil of 2.975.

We still have two Mythic weapons in the files:

The Mythic Mechanical Explosive Bow was another weapon found in the game files. Dataminers mentioned on Twitter that this new bow will deal 98 damage to opponents and will have a recoil of 4.25.

Although these weapons have been found in the game files and leaked on Twitter, there is no telling when they will arrive in the game.

All signs point towards these new weapons arriving in-game with updates v16.30 and v16.40. Only time will tell if fans will get to see Neymar and Batman arrive on the map at the same time.