A private equity bidding war has broken out for Japanese firm Toshiba.

In a sign of just how ambitious the buyout industry has become, CVC Capital Partners has made an audacious £15buillion offer.

The move pitches CVC against rivals such as KKR in the battle to take control of the industrials and technology group. 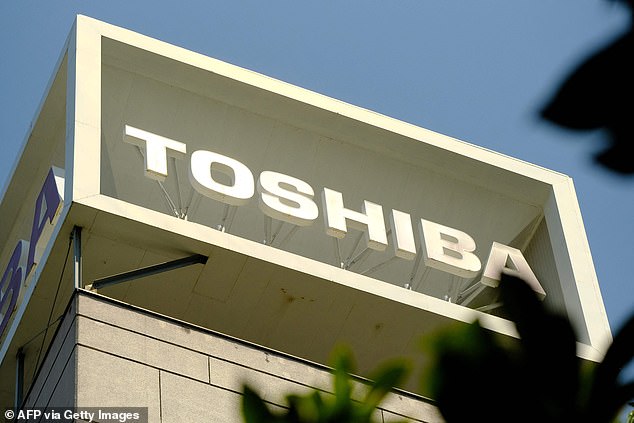 A takeover of Toshiba would be the largest ever buyout in Japan. Toshiba has been laid low by corporate scandals in recent years, facing increasing demands from activist shareholders.

But the swoop by private equity firms on such a prominent brand is a sign that the industry is gearing up for a fresh wave of deals.

Analysts believe a string of UK firms will be targeted in the coming months – raising fears over thousands of jobs.

Private equity firms have taken advantage of rundown share prices and the weak pound to mount takeovers during the crisis, in what critics have branded ‘pandemic plundering’.

Major names to be snapped up include supermarket Asda, roadside assistance firm the AA and security giant G4S.

CVC’s interest sent Toshiba’s shares surging. It is expected to make a formal bid, thought to be worth as much as £15.1billion, through a consortium that would take the Japanese company private.

Toshiba said: ‘Toshiba received an initial proposal, and will ask for further clarification and give it careful consideration. The company will make a further announcement in due course.’

The move by CVC was seen as a sign that private equity firms that have built up big cash reserves have become more emboldened.

Danni Hewson, a financial analyst at AJ Bell, said it was also likely to trigger nervousness in the boardrooms of British firms who may fear similar approaches, and likely to prompt speculation about which companies could be next.

She said: ‘The UK market, which has seen its fair share of takeover action of late, is an obvious candidate for speculation, as the relative weakness of the pound and the underperformance of UK stocks against their global counterparts has made it an attractive pond for potential acquirers to fish in.’

CVC’s bid for Toshiba comes after battles with activist shareholders have shaken the Japanese corporate world, usually known for its conservative restraint.

Toshiba has also been locked in a battle with investors over corporate governance following blunders, including accounting scandals and huge losses at its US nuclear unit.

Last month it lost a pivotal skirmish with activists, who demanded a probe into its alleged efforts to pressure shareholders into supporting under-fire executives.

They won a vote calling for the company to cooperate with an independent probe looking at claims of ‘dark art’ tactics being used to protect chief executive Nobuaki Kurumatani.

The Harvard University endowment fund, a top investor, was told through an intermediary that Toshiba had close relations with Japan’s government and that a vote to oust him could affect its reputation, according to the Financial Times.

It prompted claims of ‘unprecedented shareholder suppression’ from activist investor and biggest shareholder Effissimo. Kurumatani, brought in to stabilise Toshiba in 2018, is a former CVC executive. He said: ‘We received the proposal but we’ll discuss it in a board meeting.’

Justin Tang, analyst at United First Partners, said the takeover was ‘right up CVC’s alley’ but approval from the Japanese government would be a hurdle.