Drama, controversy and ferocity abounded at Goodison Park. Throw in a last-minute twist to infuriate purists and deny Liverpool a famous victory, it was almost as though everything was back to normal at a richly entertaining Merseyside derby.

Jordan Pickford had an extraordinary afternoon – not always in a good way – and Dominic Calvert-Lewin continued his exemplary start to the season. Yet there is still a decade since Everton last won this fixture in the Premier League.

For Liverpool, there was an emphatic response to the thrashing at Villa Park. Their intensity in the opening 15 minutes was such that Everton could barely get near them. Yet, honours would end even in a fiercely contested match of no little quality. 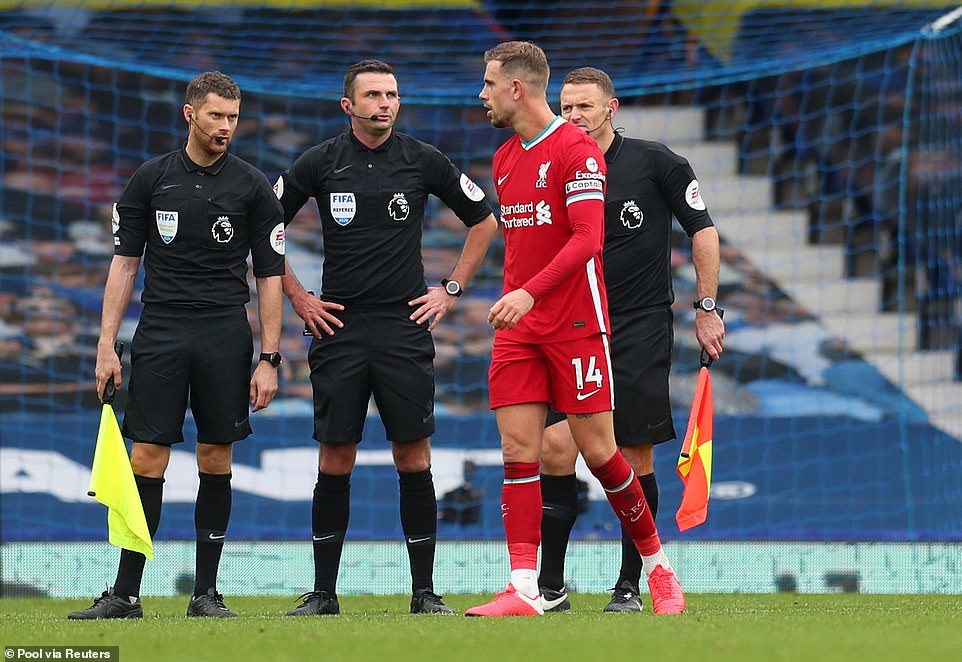 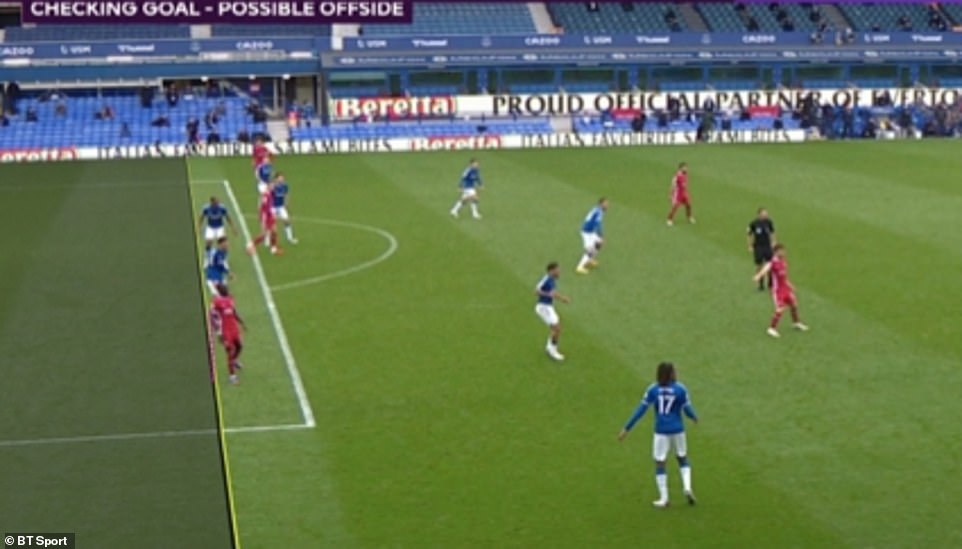 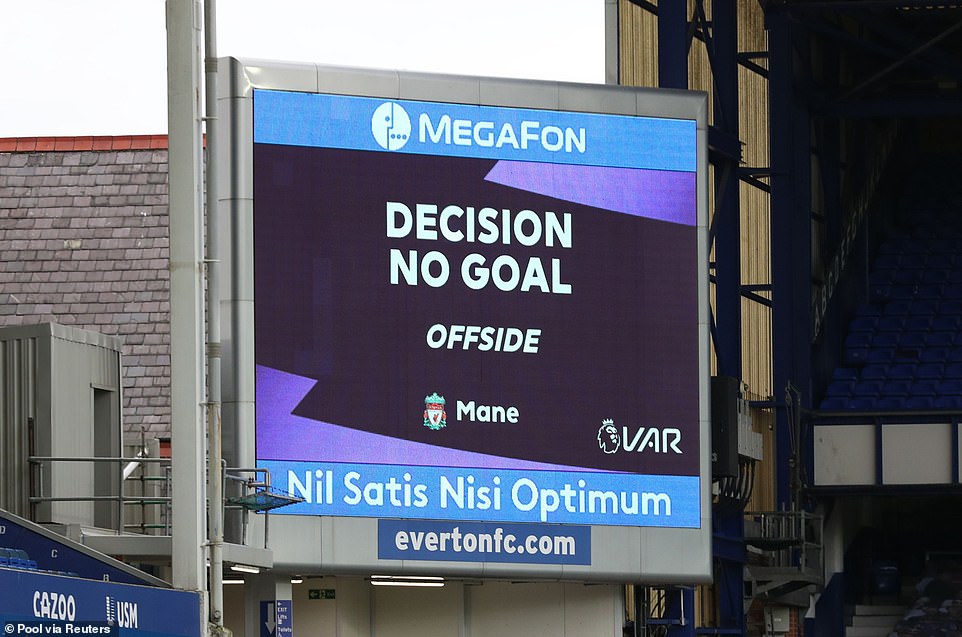 After close deliberation of the offside by the Video Assistant Referee lasting several anxious minutes, the goal was disallowed 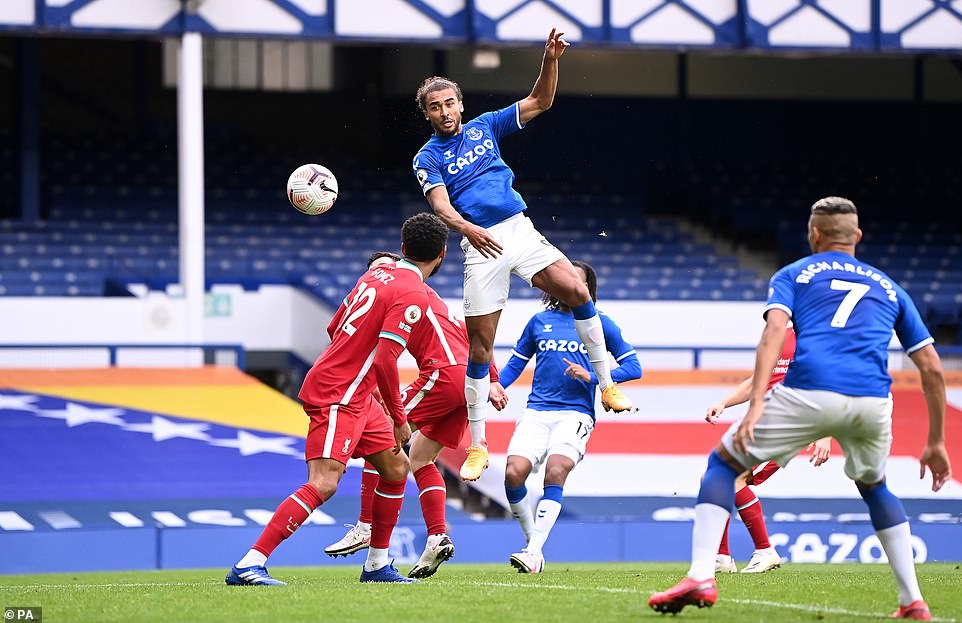 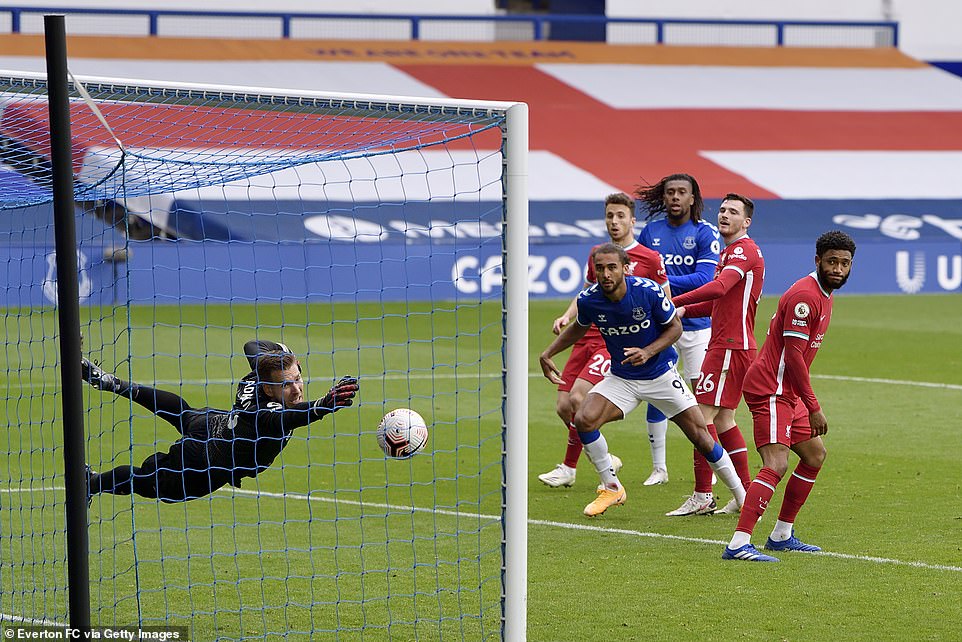 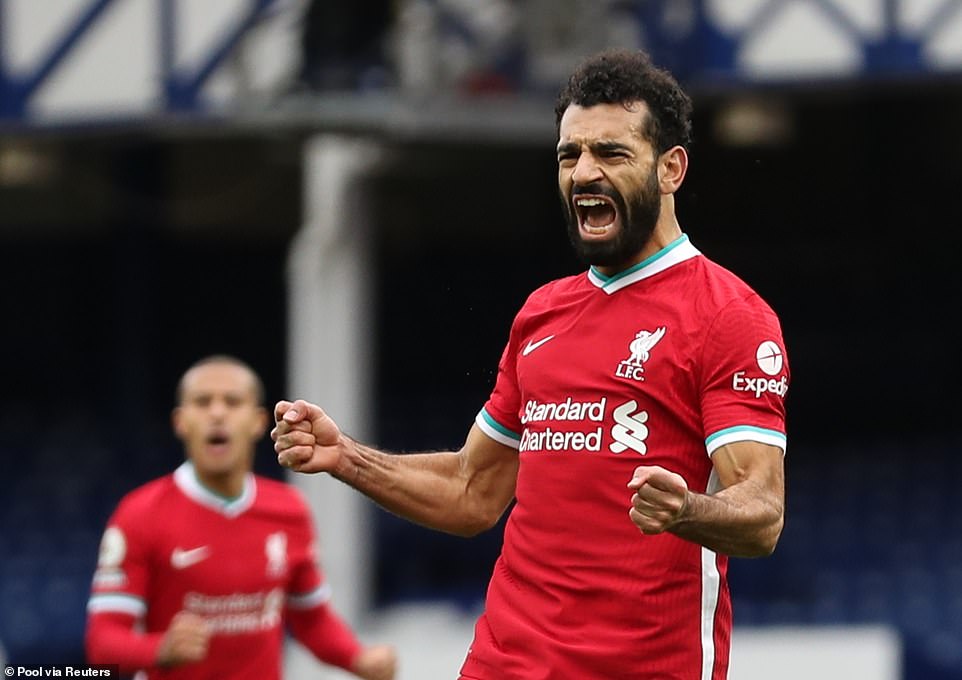 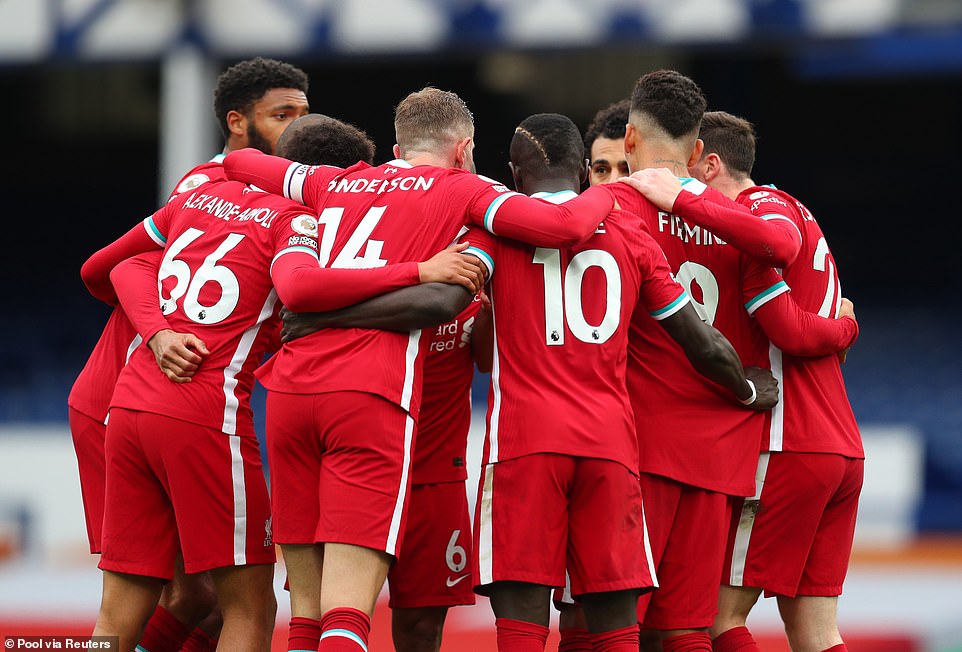 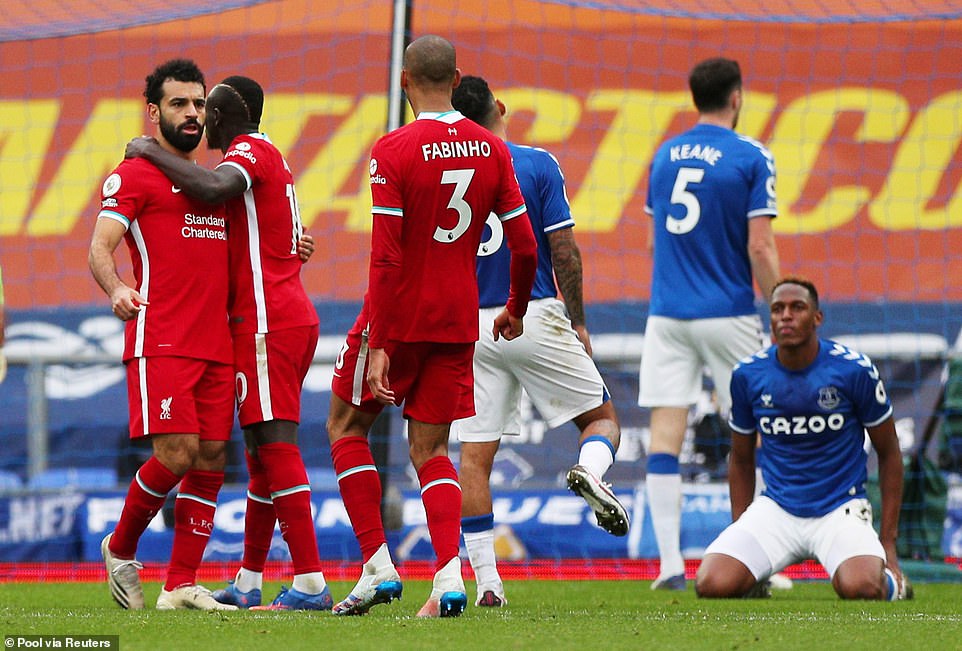 All that was missing was the one aspect, which makes any derby meaningful. Empty stadia have become a normalised part of our new routines.

And yet a near silent Goodison Park, the grandest and loudest of old grounds, brought a fresh poignancy to the ongoing tragedies unfolding around the world, not least in this freshly locked-down city.

And football at its best is a welcome diversion from reality. As such, these teams played their part to the full, allowing us to escape for 90 minutes the ominous statistics which now given our lives.

There hasn’t been a Merseyside derby as eagerly anticipated as this since the 1980s, a glorious era for football in this city. Yet Everton, top of the league and riding high, initially seemed crushed by the weight of expectation.

The Liverpool press, which just never functioned at Villa Park, seemed to be back and turned up to eleven. Within three minutes Andy Robertson beat Seamus Coleman, cross for Mane, who struck first time past Jordan Pickford; it was cold and clinical and seemed to mock Evertonian’s excitement.

Coleman beat the ground with his fist as the ball went in, knowing his mistake had caused it. He would depart halfway through the half with a hamstring injury. 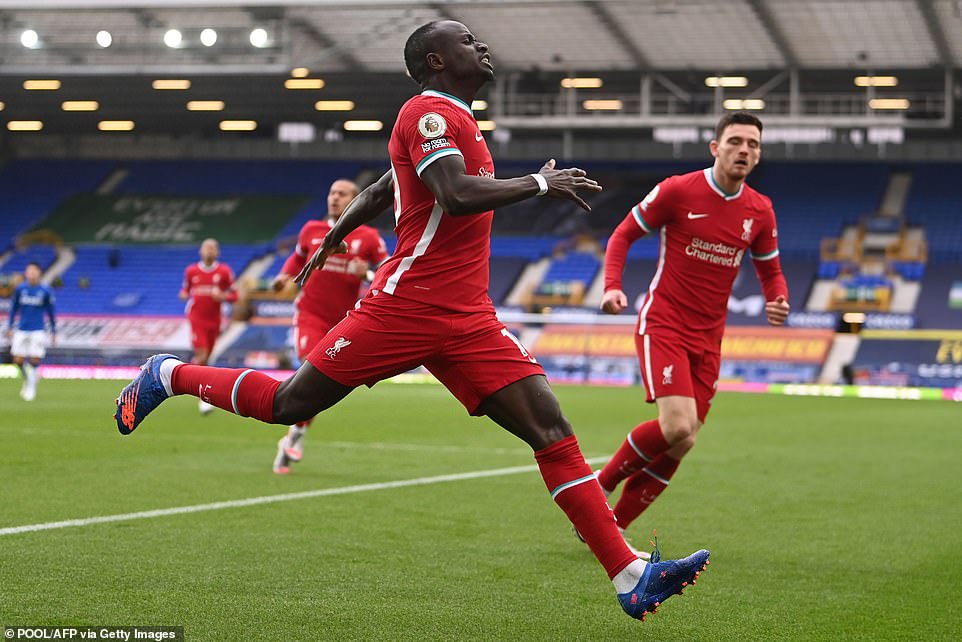 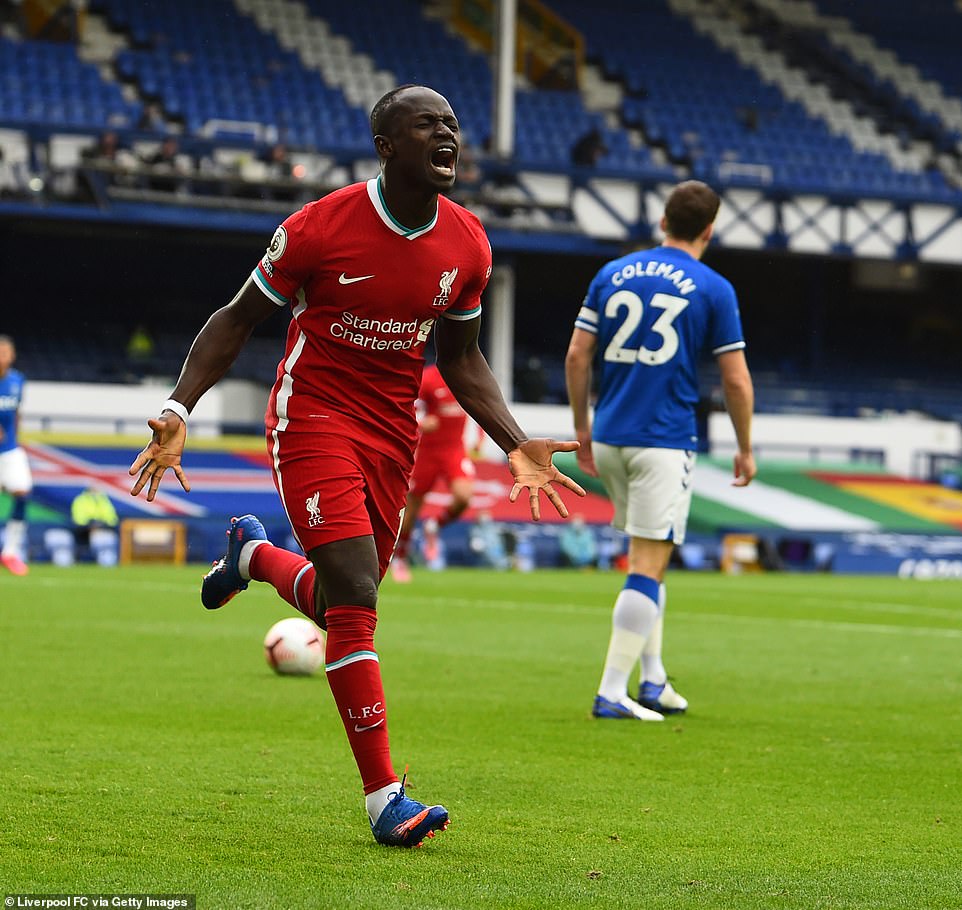 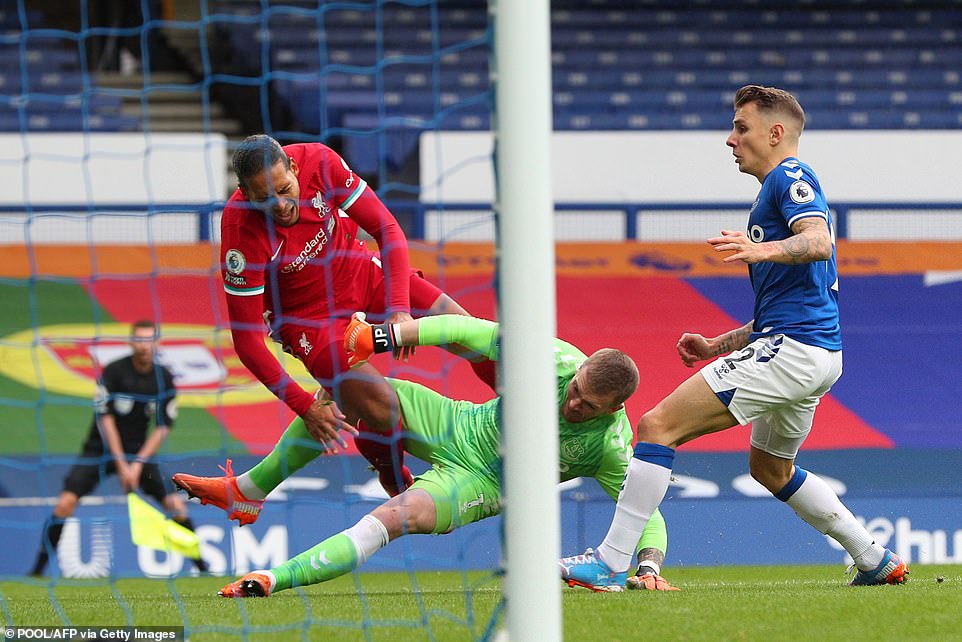 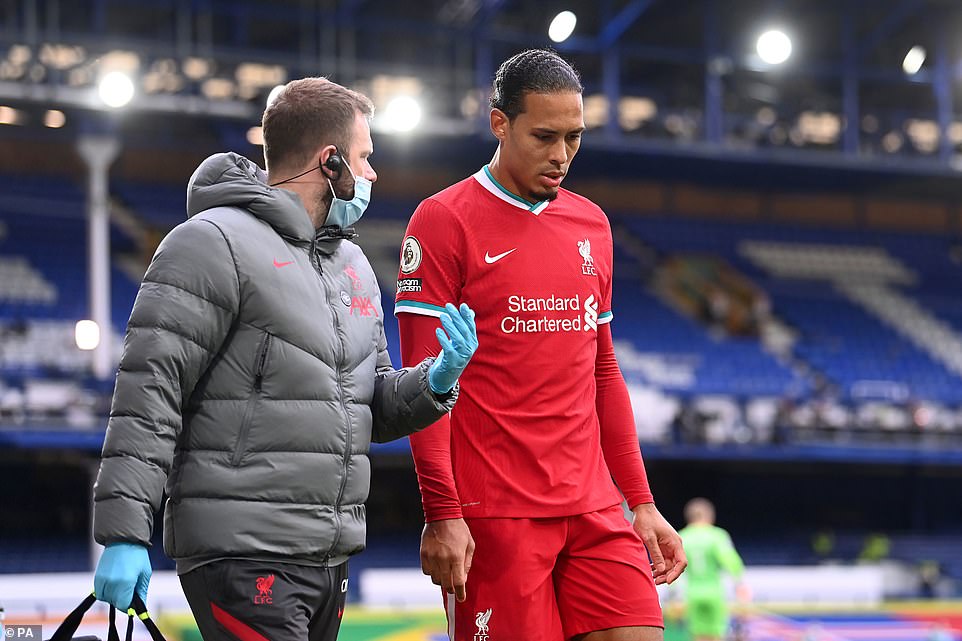 Liverpool in the ascendancy rammed home their dominance. A corner on 5 minutes was cleared but Fabinho chipped the ball over the advancing back Everton four.

Pickford was exposed. Virgil van Dijk, up for the corner, was in on goal. And Pickford suffered one of those aberrations for which he is now renowned. Out he rushed and in he clattered to van Dijk, who has nudged the ball past him.

It was high, dangerous and reckless. It would have been a penalty had not VAR come to the rescue determining that van Dijk was offside.

Yet somehow David Coote, the VAR, didn’t bother to check for a possible red, which could have been awarded regardless. You won’t see a clearer sending off this season.

Van Dijk would have to leave to be replaced by Joe Gomez. That probably showed ion 20 minutes as Everton slowly gained a grip of the game. They re-established themselves by getting Dominic Calvin-Lewin into the game, long balls, especially from the metronomic boot of James, exposed Liverpool’s back line. 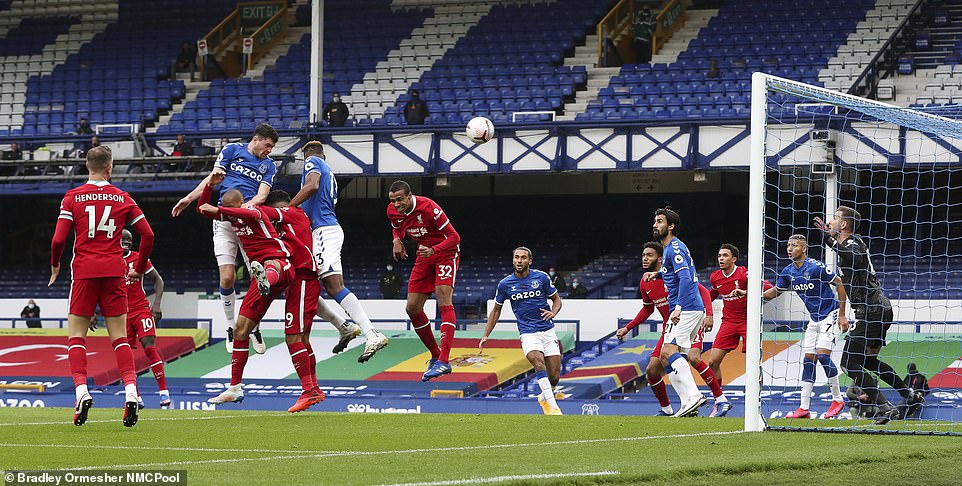 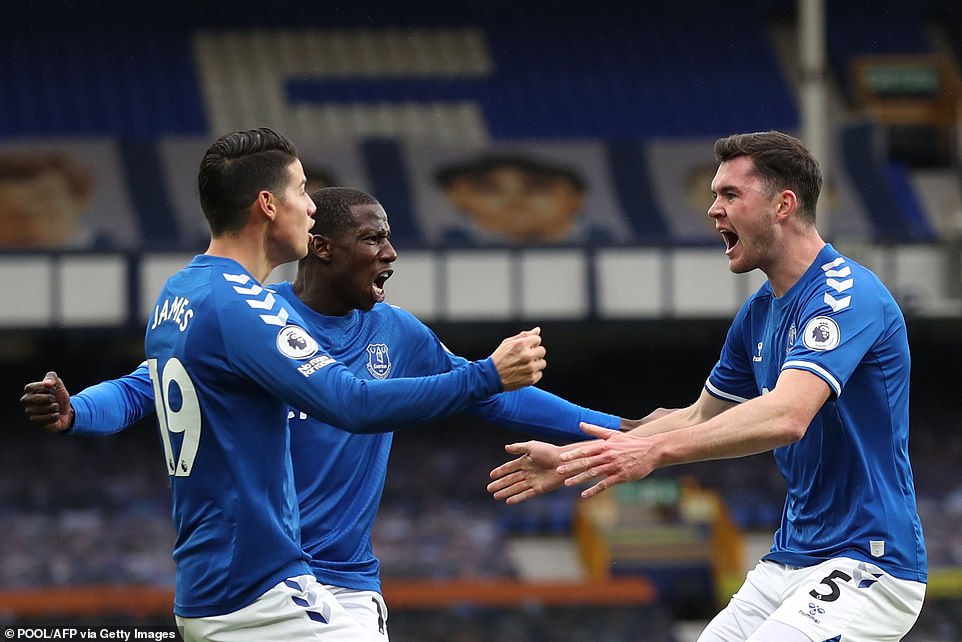 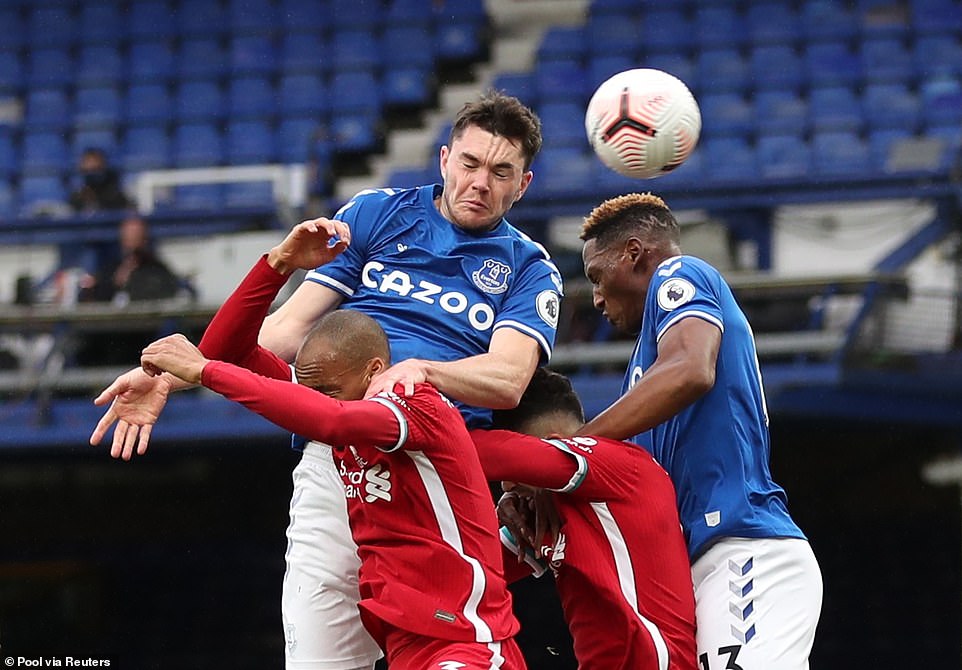 From one such foray came a corner, which James lifted directly on to the head of Micheal Keane. The jump was well time and the header thunderous but Fabinho’s failure to challenge and Adrian’s flap was equal contributors to the equalising goal.

Now a more equal contest ensued. Pickford redeemed himself with a flying save from Trent Alexander-Arnold’s free kick on 24 minutes while Mane, played in by Robertson on 35 minutes in a near carbon copy of his goal, should have done better than a tame shot wide.

For Everton, Yerry Mina flattened Thiago high up the pitch on 44 minutes, allowing Calvert-Lewin’s tohch across goal to fall painfully short of Richarlison, sliding in at the far post. Henderson then went close on 48 minutes, volleying over for Liverpool.

On the hour, Richarlison’s diving header from James’ sumptuous cross came off the post. On 65 minutes, James went alone, driving at the Liverpool back four and seeing his shot from range parried away by Adrian. Liverpool would have their own lucky escape from a red card when Mané was booked for launching himself at Lucas Digné.

On and on it went, both sides trading blows until 73 minutes in when Henderson sent in a speculative cross. Mina should have dealt with it, but simply kicked it out softy at a nice height for the preying Salah to volley home.

On 73 minutes, Joel Matip met a Trent Alexander Arnold corner with a firm header destined for goal until the extraordinary Pickford leapt to his right and clawed the ball away. IN a week in which he faced utmost scrutiny, it was a stark reminder of his qualities.

Yet Everton are perhaps not the proposition they once were, not when you have Calvert-Lewin in form. Lucas Digne provided the inviting cross and Calvert-Lewin, seemingly hanging mid-air, towering above Andy Robertson, were there to head home, his eleventh goal for club and country this season.

Yet when Richarlison was sent off on 90 minutes, for a studs-up challenge on Fabinho, and the fourth official indicated five minutes of injury time, you knew they were tempting fate. The pass from Thiago was delightful, the cross from Mane precise, the shot was Henderson good enough but the attempted save by Pickford qwas woeful.

As Liverpool celebrated, the goalkeeper raged, all his strengths and weakness exposed. Then came the interminable wait as the VAR checked. Seemingly Mane’s elbow had strayed offside. So we ended on a whimper of a disallowed goal rather than the drama of a last-minute victory. 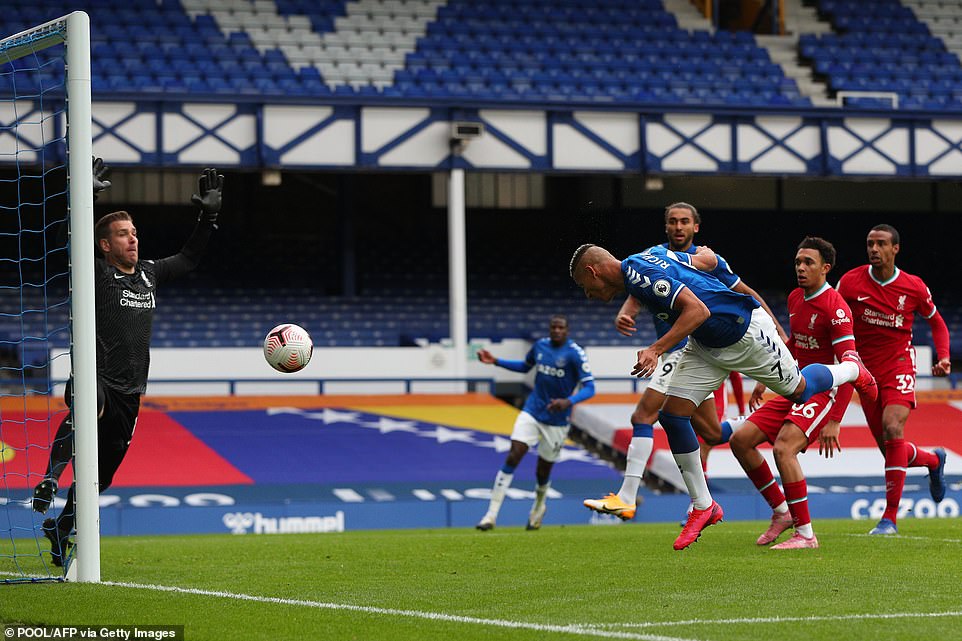 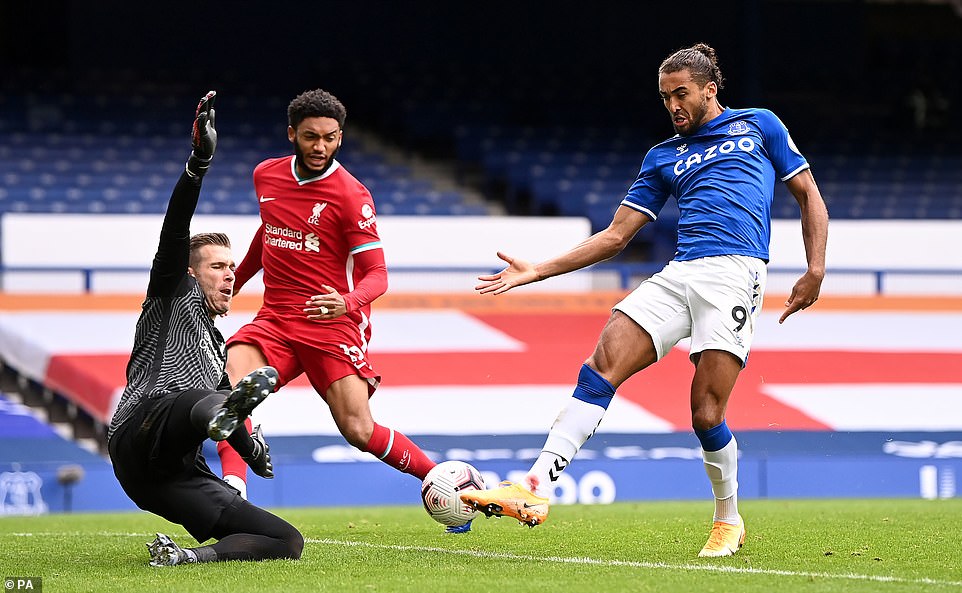 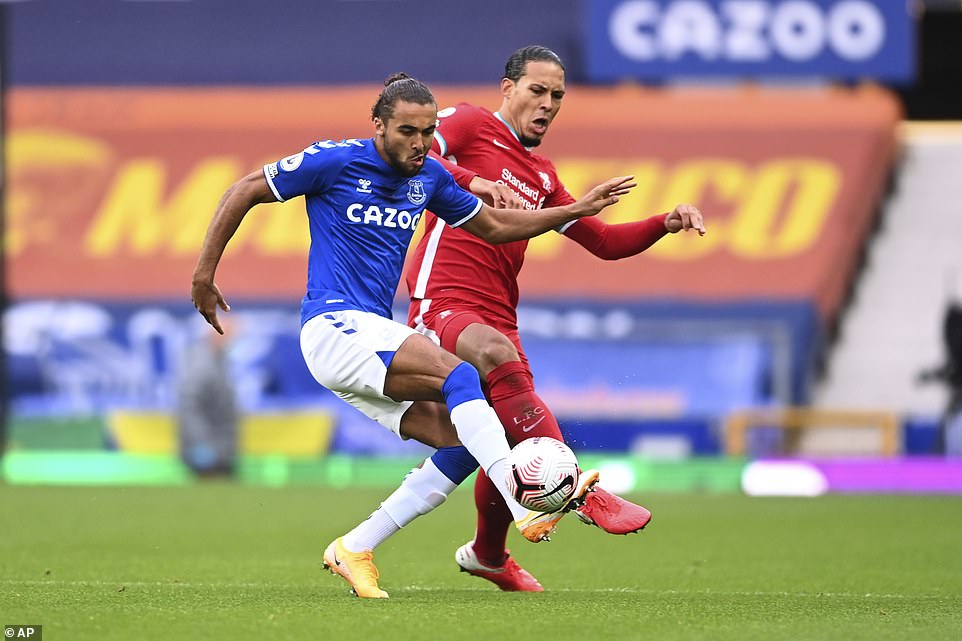 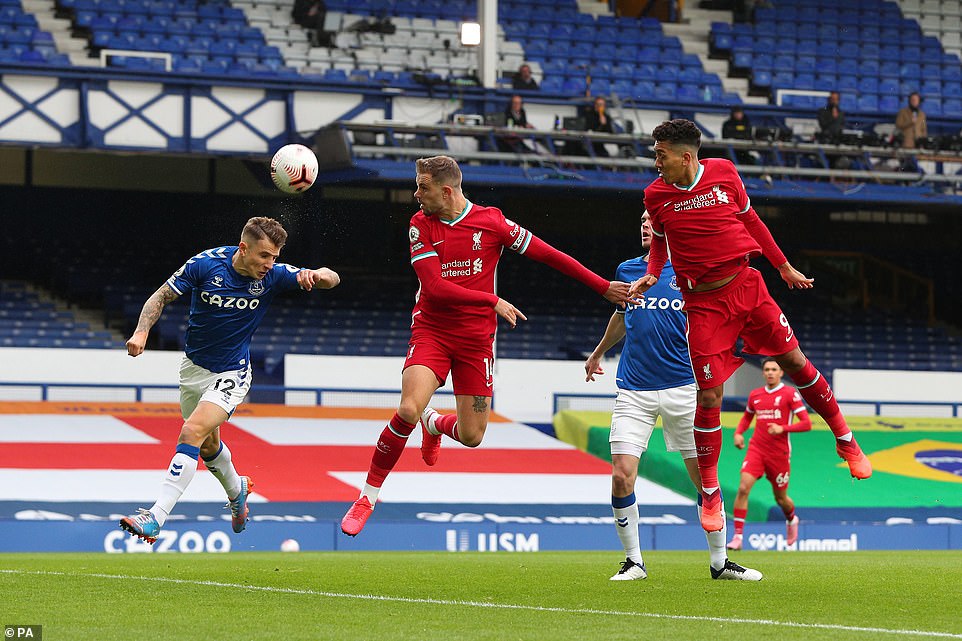 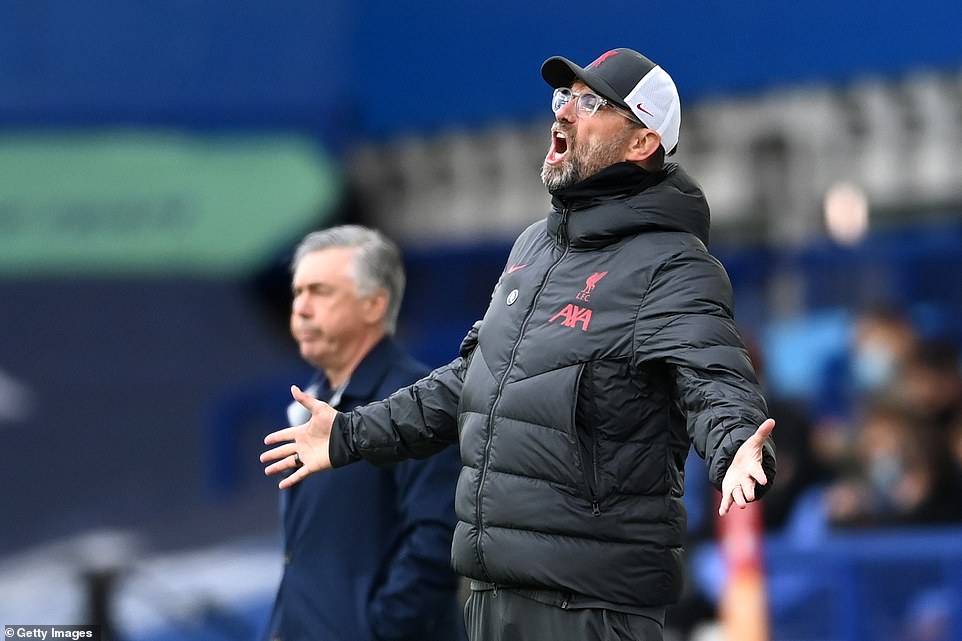