Small Giant Games’ success with Empires & Puzzles has been huge, and it’s one reason that Zynga bought the Helsinki-based studio for $560 million (and more in subsequent contingent bonuses) in 2018. The acquisition was important as it helped San Francisco-based Zynga return to growth, and it ultimately led to other deals such as the acquisitions of Gram Games, Rollic, and Peak Games.

Another way of looking at the importance of this next Small Giant game is to see what the previous game did. Zynga doesn’t break out the sales of that game, but Michael Pachter, an analyst at Wedbush Securities, estimates that Empires & Puzzles has generated $1 billion in revenues life-to-date, and probably $500 million in 2020. (Update: I believe the number is $400 million for 2020).

The new free-to-play game on iOS and Android is a zombie-themed title where players recruit heroes, build bases, and compete in player-versus-player battles through match-3 game mechanics.

“Puzzle Combat is set in a modern day environment with zombies, modern weaponry, and war machines that you can attack together as a clan,” said Bernard Kim, president of publishing at Zynga, in an interview with GamesBeat. “It’s really a lot of fun with the puzzles, and it has a meta game that is really challenging to master. We’re very excited about it.”

Kim will be a speaker on a panel with Nick Tuosto of LionTree on mergers and acquisitions at our upcoming GamesBeat Summit 2021 event on April 28-29.

In Puzzle Combat, players will immerse themselves in battling enemies from the Dread Army, gaining power-ups by creating unique match combinations. Players recruit spies, medics, demolition experts, and more to fight on their side, each bringing unique special attacks to the fray. 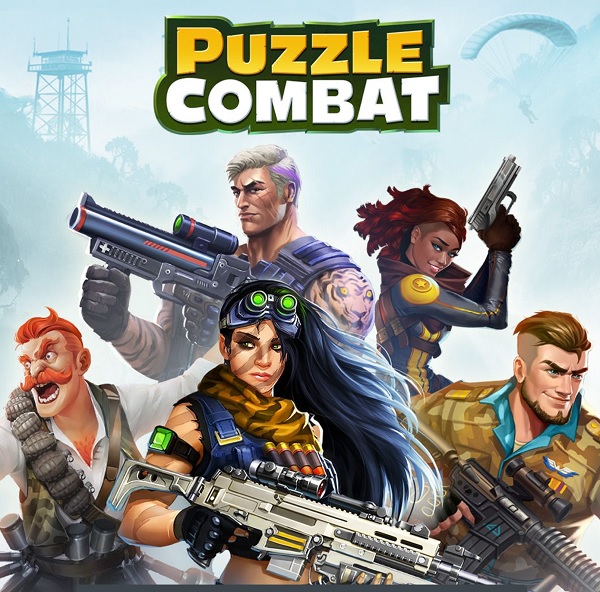 Above: Puzzle Combat is made by the makers of Empires & Puzzles.

Players will also design bases by constructing and upgrading buildings like foundries, workshops, training schools, and quarters. Jose Saarniniemi said in a statement that the game combines key elements of Empires & Puzzles with a modern combat-themed design.

To win, players can summon heroes from hundreds of individualized choices, each with unique abilities, and collect different weapons to upgrade and use in the field. As players progress, they can also join alliances to share best tactics and compete in challenging team events to promote their heroes, advance together, and form the ultimate fighting force.

The game has more than 200 unique heroes, each with special attacks. The game will have raid seasons with rewards. The cooperative alliance game modes let players dismantle powerful war machines, attack rivals in team battles, and dominate in team events.

Social features, such as global and alliance chats, allow players to exchange tactics and form teams to achieve the next level of gameplay. And limited time events let players earn unique rewards and compete against other players.

The launch is a surprise in that Zynga said the game was scheduled to debut this year, but it turned out that the game did particularly well in limited market testing, Kim said.

“We’re really excited about the performance of the game and we believe now is the right time to also scale marketing against the product,” Kim said.

The title has some similarities in gameplay and base building, but it’s not a sequel to Empires & Puzzles.

GamesBeat’s creed when covering the game industry is “where passion meets business.” What does this mean? We want to tell you how the news matters to you — not just as a decision-maker at a game studio, but also as a fan of games. Whether you read our articles, listen to our podcasts, or watch our videos, GamesBeat will help you learn about the industry and enjoy engaging with it.

How will you do that? Membership includes access to: