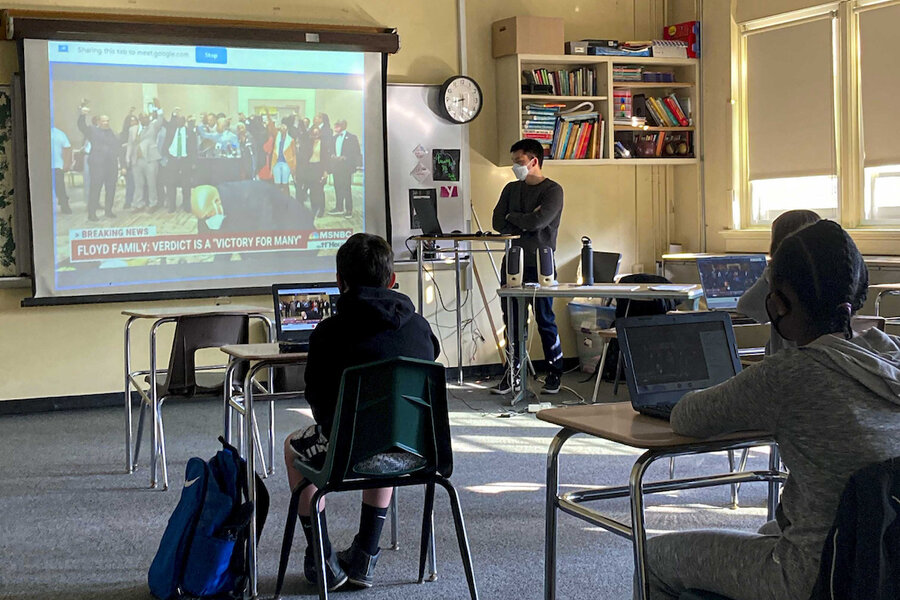 As she watched a broadcast of the verdict in the murder trial of the police officer charged with killing George Floyd with her last-period class, middle school teacher Diana Garcia-Allen did her best to stifle her own emotions and keep from crying. She sensed a sadness mirrored in her students.

“I don’t think until that moment they felt the weight of it,” she said.

The guilty verdicts were welcomed by her students in Fort Worth, Texas – all Hispanic with one Black student – but they had a range of viewpoints. Some were relieved because violent protests might have broken out otherwise. One boy said he didn’t see why former police officer Derek Chauvin should serve a lengthy prison sentence, prompting a groan from classmates.

“I kind of just let them go with it,” said Ms. Garcia-Allen, a career and technology teacher. “I think it’s important for them to just share and have a voice.”

Tuesday marked the latest challenge for teachers around the United States who have grappled with how to address the country’s reckoning with racial injustice for the past year. In the moment and the immediate aftermath of the verdict, some have looked to challenge students’ thinking or incorporate the trial into their curriculum. Others sought to give youths space to process their reactions or held off on addressing it at all.

“There is no manual for situations such as those we’ve been thrust into over the past year, but we know listening with an open mind and without judgment is critical,” he said.

At Metropolitan Business Academy, a magnet high school in New Haven, Connecticut, social studies teacher Leslie Blatteau, who teaches mostly students of color, eased into the discussion during a virtual session Wednesday with nine students. When she asked for students’ thoughts and feelings on the trial, three spoke up.

“Two really brought up the fact that it does help kind of bolster their optimism that the movement for Black Lives Matter is working and that the accountability that was established last night is part of the process of moving forward,” she said. “And I’m glad. They deserve to feel that amidst all of the all the pain and all of the violence, young people deserve to feel optimistic.”

Another brought up Rodney King and the Los Angeles riots of 1992.

Ms. Blatteau said no one brought up Tuesday’s police killing of teenager Ma’Khia Bryant in Columbus, Ohio, and Ms. Blatteau herself wasn’t ready to raise it.

“If somebody brought it up, I would have gone there. But I wasn’t going to, at least not today. Tomorrow,” she said, “But not today.”

On Tuesday, he had several students waiting after school to hear the verdict. One student asked him whether the guilty verdict should be celebrated. He said his initial response was “Yes,” but as the excitement has waned, he said he’s left torn.

“I have chatted with students this morning, many are still feeling pretty jubilant, but now many of them are starting to realize that yes, in the sense of justice, this is a win,” Mr. Cooney said. “But with the systemic, societal issues we face as a nation, we still have a lot of work to do.”

In some schools, elements of the trial were incorporated into lesson plans.

At New Jersey’s Maplewood Middle School, one teacher redesigned an English language arts lesson to analyze the trial’s closing arguments with her seventh-graders and another showed video of the post-verdict reaction to spark a discussion. The school’s social services team provided a script for teachers who felt like they needed something to help guide conversations.

At West Las Vegas High School, in northern New Mexico, several students said the verdict was not discussed in their classes. Teachers said they did not plan to discuss the case because they were afraid of appearing biased and getting complaints from parents.

“There are people I would really not talk about it with,” said Julienne Rirsimaah, a high school senior and one of the few Black people in town.

In Texas, Ms. Garcia-Allen said fear of controversy would likely keep many of her colleagues from addressing the trial. While she had engaged her students on the Capitol riot in January, she couldn’t find any other teachers at her school who did.

In the discussion Tuesday after watching the verdict, Ms. Garcia-Allen said she focused on facts and tried to keep out her views, although she did challenge the student who questioned why Mr. Chauvin should face severe punishment.

“Finally I was like ‘Justice, it’s finally justice, right?’ and so we kind of had that discussion,” she said.

She was putting together some dialogue cues to be prepared for additional discussions that were sure to follow this week.

“They feel a genuine empathy,” she said. “They were ready to engage in this conversation and learn. And that was exciting to see.”