Mick Oldfield turned 80 in March and for the last 55 of those years he has been a cornerstone of one cricket club.

So what is it that keeps him going? ‘The challenge of preparing pitches,’ he instantly replies. ‘My enjoyment is seeing the lads playing on a Saturday on a decent surface. That’s all I need.’ 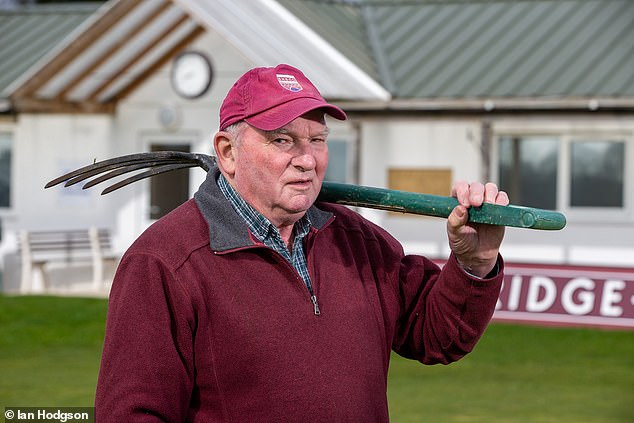 It seems a simple pleasure but it is no simple job. Oldfield estimates he spends an average of four days a week volunteering at the ground on the outskirts of York. But those close to him will almost certainly say it is more.

‘That question would be better pointed at my wife,’ laughs Oldfield, who spent his 80th birthday buying a new outfield cutter for the club.

‘A lot of people don’t understand how much time actually goes into preparing the pitch. It takes 10 days from watering to actually bowling the first ball on it, and there will be 10 hours rolling in that time.’

It is not by chance that Moor Farm is consistently marked as one of the area’s best grounds.

‘Rather than be top, you’re better being in the top 10 for 20 years, which is probably where we’ve been,’ Oldfield proudly tells Sportsmail.

And that is not the only pitch he will be judged on, as Sheriff Hutton Bridge took over neighbouring club Sheriff Hutton last year, meaning Oldfield now has a second square to maintain.

‘I’m looking forward to achieving our objective of lifting the standard of the other ground,’ says Oldfield, who made his playing debut for the club in 1966. ‘It will take two years to get right but that is the next challenge.’ 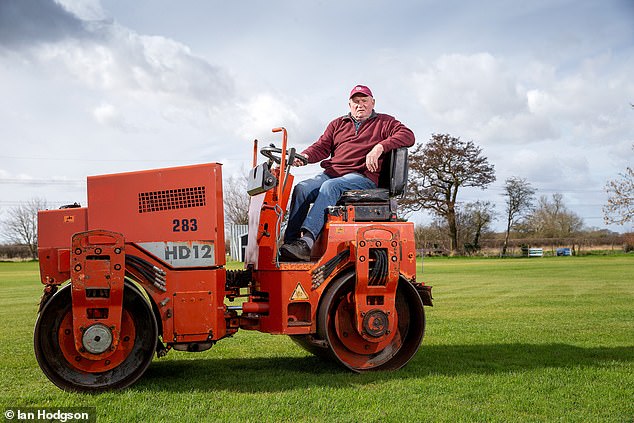 Oldfield has faced most challenges in 40 years as groundsman, but last year was a new one when Covid halted cricket until July. Not that it stopped him from working on the wickets.

‘If you are in lockdown, you have to stop at home watching telly, but if you are a groundsman you can come down here every day, so where would you rather be?’ he grins. ‘You’re disappointed because you are doing the work and there’s nobody playing, but we had to be on the verge of having the pitches ready.’

As the Bridge’s chairman of 30 years, Oldfield also saw how Covid hit the club’s coffers.

Thankfully, normality looks set to resume this summer with Oldfield and his fellow volunteers working on the first wicket of the season for an intra-squad friendly this weekend. The club has four senior Saturday sides and a thriving junior set-up which attracts up to 100 children. There is coaching for four to eight-year-olds and teams from Under 9s to Under 15s, with a new girls’ side also being formed this season.

‘I get pleasure from seeing somebody come down at the age of seven or eight and thinking, “He will make the first team by the time he is 16”, then following them through the years,’ says Oldfield. ‘When they get there and make it, you are chuffed because you have picked them out.’ One such player is Matthew Fisher, who first featured as a Bridge junior aged seven and went on to become the youngest cricketer to play in a competitive county match when he made his Yorkshire debut aged 15 in 2013. 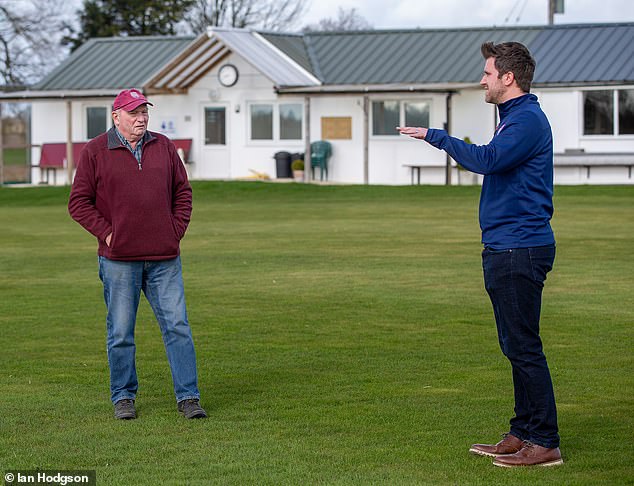 Oldfield, who turned 80 in March, speaks to Sportsmail’s David Coverdale at  the cricket club

The England Lions bowler was also part of the Bridge side who won the Yorkshire Premier League North in 2019, alongside his older brothers Adam, the captain, and Mark. They went on to claim the overall Yorkshire title with a play-off final win over Bradford League champions Woodlands at Headingley — the proudest day in Oldfield’s long association with the club.

‘We won the National Village Cup at Lord’s in 2005 but that win at Headingley was far greater,’ he says. ‘We will never have a better team. That’s as good as it gets.’

Even after all these years, Oldfield says ‘winning on a Saturday’ is still the greatest thrill.

‘If the beer is tasting good on Saturday night, you can’t ask for more,’ he smiles. So how long until he is enjoying that beer without a full week’s work leading up to it? ‘If I knew that answer I’d be a clairvoyant,’ he jokes.

‘We played a game on the Kensington Oval in Barbados a few years back and the groundsman there was 82 and I thought, “He’s done all right that lad”.’

Sheriff Hutton Bridge members past and present would no doubt say the same about Oldfield.

MATTHEW FISHER: I OWE MY YORKSHIRE CAREER TO MICK

I don’t think I would be playing for Yorkshire if it wasn’t for Sheriff Hutton Bridge — and Mick Oldfield is such a big part of that.

He is the leader and sets the example for the players to follow. The hard work he puts in off the field, the lads do on it.

It is quite surreal that he is still doing the ground at 80 but his work is relentless. He is there most mornings at the crack of dawn.

The outfield is top notch and it has won awards for the best club outfield in the area. If there were stands there, you would think it was a county ground. It compares to Headingley and Scarborough.

Having a good ground with good facilities only helps grow the game. It gives players the motivation and pride to go down there to practise and perform.

Every time I chat to Mick he is so positive. He wants the ground to look in great nick and he wants the team to do really well. It hurts him if we lose a game on a Saturday. Equally, when we won the Yorkshire Premier League at Headingley in 2019, it gave him so much joy and pride and motivation to keep going and doing the ground.

He is just as chuffed when the junior teams win because he knows how vital they are to the club. Your first few years as a junior are so important and he is always so accommodating to anyone who wants to go down for extra practice.