‘Hopefully his new home next season!’ City fans thrilled by Erling Haaland’s reaction to entering the Etihad to train ahead of Champions League quarter-final against Pep Guardiola’s side on Tuesday night

Fans have expressed their excitement after Erling Haaland gave a two-word response while entering the Etihad Stadium ahead of Borussia Dortmund’s Champions League quarter-final against Manchester City.

The Borussia Dortmund star is one of the hottest properties in world football after scoring an astounding 33 goals in 32 games in all competitions so far this season.

Norwegian striker Haaland, just 20, is set to lead the line for the German side against his potential future employers but could not stop himself from admiring the ground at the club where his father Alf-Inge used to play, saying the stadium was ‘beautiful’ as he left the tunnel for training on Monday. 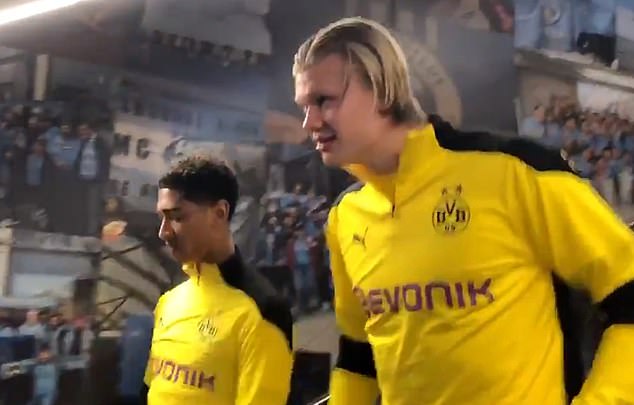 With the announcement that long-serving all-time record goalscorer Sergio Aguero will depart on a free transfer at the end of the season, there is a space in Guardiola’s squad for a striker.

Although they will face tough competition from many of the most prestigious clubs in the world football, City are keen to sign Haaland to sign the sought-after striker and secure the long-term future of their attacking line.

Sportsmail reported on Monday that they could break their £100million ceiling and double their transfer record to make a proposed £154m move happen this summer.

Haaland, walking alongside English midfielder Jude Bellingham, 17, remarked ‘Beautiful huh?’ in a video posted on Twitter, before walking out to the vast empty expanses of the stadium where he is set to play on Tuesday night.

And supporters were quick to pick up on his comments, with one hopefully posting: ‘Hopefully his new home next season’. 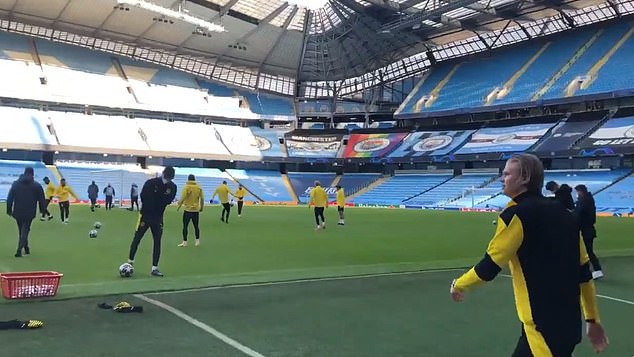 The Borussia Dortmund striker said ‘Beautiful huh?!’ when walking into the Etihad Stadium

A second said: ‘Have a good look around your new home’, while another added: ‘Could be playing there next season’.

@FodenFantastic continued by saying: ‘He’s been to many other games with his dad too, he’s a City fan through and through’.