There was more evidence Nicola Sturgeon’s independence drive is faltering today with backing for the UK at the highest level in 18 months.

A Savanta ComRes poll found 54 per cent would vote No if Ms Sturgeon achieves her ambition of triggering another referendum.

The research for the Scotsman also suggest the SNP is set to lose two seats in crucial elections next week – leaving it four seats short of a majority.

Ms Sturgeon has made calling a fresh ballot on separation as early as this year the key plank of her manifesto.

She has insisted that a big SNP win provide a mandate for another contest, even though the last vote in 2014 was billed as ‘once in a generation’.

However, after riding high for months, a slew of recent polls have shown backing for dividing the UK has been slipping, as Ms Sturgeon’s civil war with Alex Salmond rages.

Meanwhile, NatWest inflicted another setback on Ms Sturgeon by confirming it will have to move its headquarters to England if Scotland does break away.

And a think-tank has found higher spending north of the border has not succeeded in driving up standards. 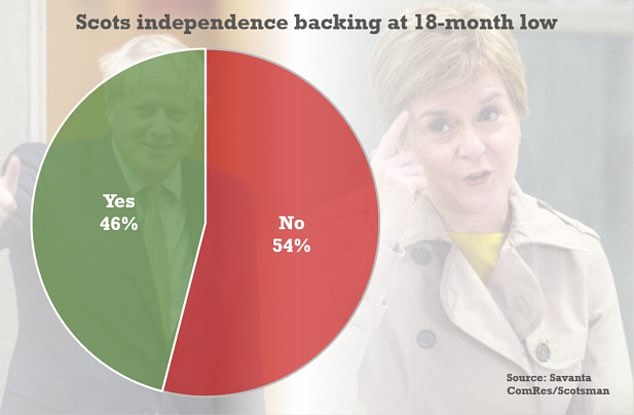 The Savanta Comres survey found 42 per cent would back independence, 49 per cent support a No vote. When ‘don’t knows’ were excluded that gave a 54-46 split in favour of the union.

Higher spending in Scotland ‘has not driven up standards’

Nicola Sturgeon’s spending bonanza on education has not driven up standards, according to a think-tank.

A report from the Institute for Government (IfG) found that although spending per pupil was around a tenth higher north of the border, attainment in maths and science among 15-year-olds had fallen relative to English students.

The study suggested England’s use of ‘market-like mechanisms’ had delivered more improvements than the focus on ‘public sector collaboration’ in Scotland and Wales.

‘All else being equal, Scotland’s higher spending should translate into higher educational attainment – although it does not,’ the think-tank said.

Ahead of the election next Thursday, the SNP was on 45 per cent in the constituency vote – a 22 point lead over the Conservatives and Labour who were both on 23 per cent.

But Ms Sturgeon’s party was down two points on the list vote at 36 per cent, with the Conservatives on 22 per cent and Labour on 19 per cent.

The biggest change from last week was for the Scottish Greens, who were up three points in the list at 10 per cent.

According to electionpolling.co.uk’s calculator, these results would leave the SNP four seats short of an outright majority at Holyrood.

However, they could be rescued by the pro-independence Greens who could take as many as 11 list seats – five more than in 2016.

Chris Hopkins, associate director at Savanta, said: ‘The direction of travel has been clear in the last few polls, with support for both independence and the SNP dropping ahead of the May elections. What this is down to remains unclear.

‘It seems that the two major unionist parties, the Conservatives and Labour, have somewhat – but by no means completely – got their act together.

‘This, coupled with a potentially more fragmented pro-independence List vote, means the SNP may fall short of their majority and not give Nicola Sturgeon the unequivocal mandate for a second independence vote that she so clearly craves.’

Scottish Conservative leader Douglas Ross will warn the ‘very future of our country is at stake’ in a speech later.

A pro-independence majority will mean the country would ‘move straight from a Scottish Parliament election campaign into a second referendum campaign’, Mr Ross will claim. 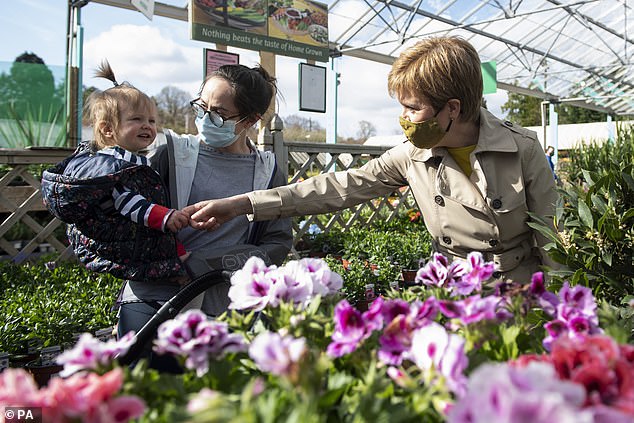 NatWest has said the bank would move its HQ from Scotland if the country votes for independence in a referendum.

NatWest – which renamed itself from Royal Bank of Scotland last year – is currently headquartered in Edinburgh.

‘We have been very clear, and it’s recognised by senior nationalists, that in the event that there was independence for Scotland our balance sheet would be too big for an independent Scottish economy,’ NatWest CEO Alison Rose told reporters.

‘And so we would move our registered headquarters in the event of independence to London.’

Ms Rose added: ‘We are neutral on the issue of Scottish independence. It’s something for the Scottish people to decide.’