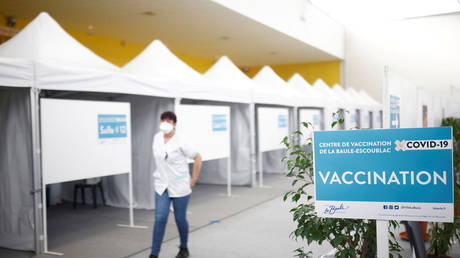 The French prime minister has announced the passing of a symbolic milestone, with more than 10 million people having received at least one shot of Covid-19 vaccine, but infection rates remain high across the country.

Speaking on Thursday, during a visit to vaccination center in Nogent-sur-Marne, French Prime Minister Jean Castex said he was “immensely satisfied” by this “very good performance” as France inoculated its 10-millionth citizen against the coronavirus.

“We are a week ahead of the objective I had set… and this is due to all those health professionals, all those volunteers … all those elected officials, to all those who are seven days a week … on the bridge in the service of this great national cause,” Castex told the gathered press.

France’s inoculation program has been heavily criticized, having appeared to have made even slower progress than its continental neighbors when the EU-wide inoculation campaign was launched in late December. Paris has also repeatedly changed its guidance on the use of the AstraZeneca vaccine, and failed to secure any shots from French manufacturer Valneva, which located its Covid-19 vaccine production site in the UK.

Speaking earlier on Thursday, government spokesman Gabriel Attal said regional restrictions to reduce Covid-19 appeared to be working, but admitted the healthcare situation remains “serious” and that, “in certain regions, the situation is worrying.”

Last week, as infections surged, President Emmanuel Macron announced that the tougher lockdown measures in place in 19 areas, including Paris, would be extended to the whole country for four weeks. Travel is limited to a 10km radius of citizens’ homes, and they require a certificate for longer essential journeys. All face-to-face teaching in schools was suspended ahead of the two-week spring break, with classes set to resume on April 26.