Two brothers are suing a Florida police department for a 2017 altercation where officers detained the pair while using excessive force, believing Star Trek paraphernalia hanging in their home were weapons.

Raymond and Randall Purcell are seeking a minimum of $75,000 in damages, naming Fort Lauderdale police officers Steven Pohorence and Alexander Paul and the city as defendants in their lawsuit filed Monday.

Pohorence made national headlines last year in a separate incident when he was charged with first-degree misdemeanor after he was seen on video pushing a kneeling woman during George Floyd protest in the city last year.

The suit alleges that Paul hit then-62-year-old Raymond with the butt of his gun, slammed him to the ground and pulled his arm so roughly that ‘Raymond heard a snap in his arms and went limp,’ the Miami Herald reports. 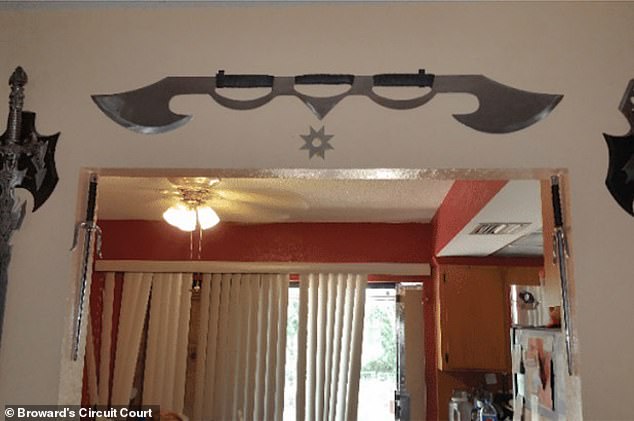 Raymond and Randall Purcell are suing Fort Lauderdale police officers Steven Pohorence and Alexander Paul and the city for a 2017 altercation where officers detained the pair while using excessive force, believing Star Trek paraphernalia hanging in their home were weapons

Paul then allegedly punched Raymond in the face ‘with so much force that it knocked Raymond’s acrylic partial dentures out of his mouth.’ Raymond pleaded with Paul while the beat down occurred, according to the suit, telling the officer he was disabled.

And when his brother tried to intervene, Pohorence stepped in and kicked Randall before placing his foot on the man’s face. Randall was left with a half-inch cut near his eye, the suit states.

‘As a direct and proximate result of the city’s negligent supervision, retention and training of defendants Pohorence and Paul, [the Purcells] were subject to injury, including deprivations of their civil rights and state law rights,’ the brothers’ attorneys asserted in their complaint.

Raymond had called police to the home after he and his wife’s car had been keyed,  allegedly by a relative, according to a news release for the lawsuit.

Officers refused to make an arrest, to the disappointment of Raymond, claiming that the damage appeared to be under $1000 and adding that the relative was no longer on the property.

Raymond hit the hood of his car, and while in his garage he also tossed a flashlight in the opposite direction of where the officers were standing, according to the suit. 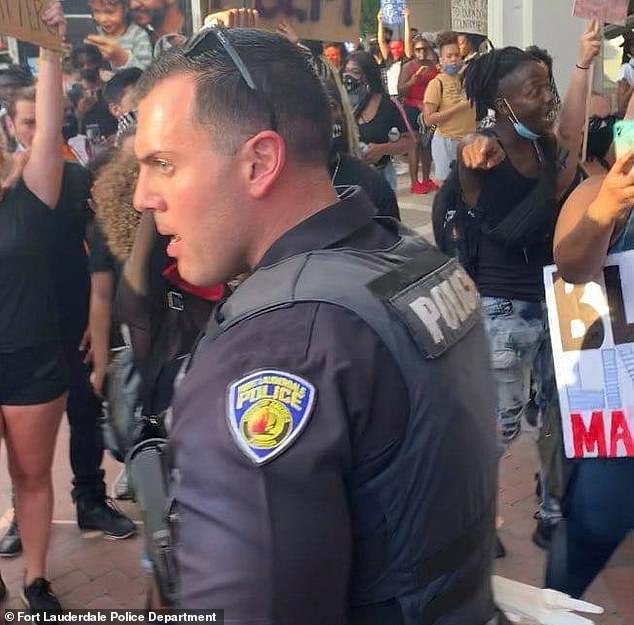 As Raymond attempted to go back inside his home, officers rushed him and detained the man and his brother.

Both Paul and Pohorence said in their depositions that they felt threatened by the bothers because they knew Raymond had a concealed firearm permit and a firearm in the home. Paul added that they saw ‘weapons all over the wall.’

The weapons had actually been Star Trek memorabilia and decorative blades, the suit reads.

Both officers shared that they did not have probable cause to arrest Raymond.

‘We were detaining him for an officer-safety issue,’ Pohorence said in hia deposition.

The lawsuit states that the brothers ‘suffered damages, including mental anguish, bodily injury, pain and suffering, humiliation, embarrassment, loss of earnings, and loss of ability to earn money.’ 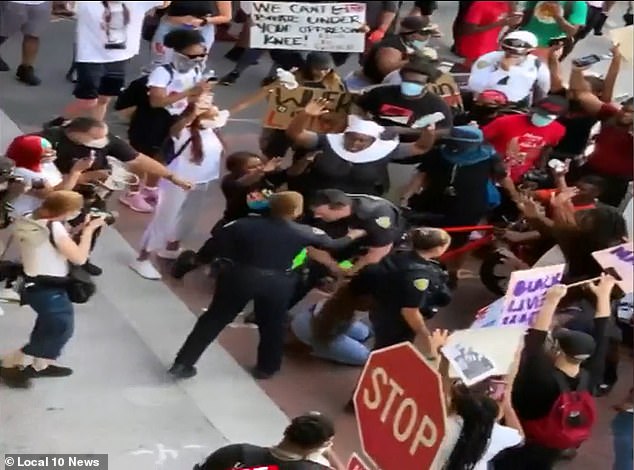 Pohorence has been reviewed by FLPD’s internal affairs unit for using force 79 times in the less than four years he has been with the department, He is currently on administrative leave without pay following the shoving incident

The suit also mentions that the FLPD internal affairs probe into the officers conduct concluded in 2019 that the two were cleared of wrongdoing. The files were never sent to the Citizens’ Police Review Board, which reviews investigation and recommends disciplinary actions once completed by internal affairs.

‘The city and its Police Department supervisors and superiors knew its officers were initiating unlawful searches and seizures as well as using excessive force against Fort Lauderdale civilians and residents,’ the suit reads. ‘It took no action to train or discipline its police officers to avoid the constitutional violations discussed in this Complaint.’

The brother’s lawyer said that it was ‘unsurprising’ that the internal affairs investigation cleared the officers of wrongdoing, vowing that he and his co-counsel – Ben Kuehne – would ‘relentlessly seek justice’ for the Purcells.

‘It is unfortunate and unsurprising that the Fort Lauderdale Police Department’s internal affairs investigation cleared both officers of wrongdoing,’ the Purcells’ attorney, Michael T. Davis, said in a statement.

‘It is yet another example of the need for a system in which these types of investigations seek justice rather than justification.’

Pohorence has been reviewed by FLPD’s internal affairs unit for using force 79 times in the less than four years he has been with the department, He is currently on administrative leave without pay following the shoving incident.

Paul is currently being sued for shooting Broward resident Melvin Wring in a June 2019 incident at the Broward County Transit central bus terminal. Wring is seeking $30,000 for the shooting and and alleges unnecessary deadly force, asserting he posed no threat.