So that’s why the cabin crew greet you at the plane door! Flight attendant reveals staff ‘look passengers up and down’ to spot people who can help in an emergency

By Kate Dennett For Mailonline

A flight attendant has revealed that smiling staff greet passengers at the door of the airplane to spot people who are equipped to help them in case of an emergency.

Kat Kamalani, from Salt Lake City, Utah, took to TikTok to reveal the secrets of her job, including why flight attendants ‘look you up and down’ as soon as you board an airplane.

In a video, she admitted that staff greet you at the door to find ‘able-bodied people’ on the flight, meaning people who are able to assist flight attendants in case of an emergency.

Kate went on to explain that the term ABPs refers to people including doctors, nurses, and military personnel, who would be able to assist them in a crisis, for example during a security breach or medical emergency. 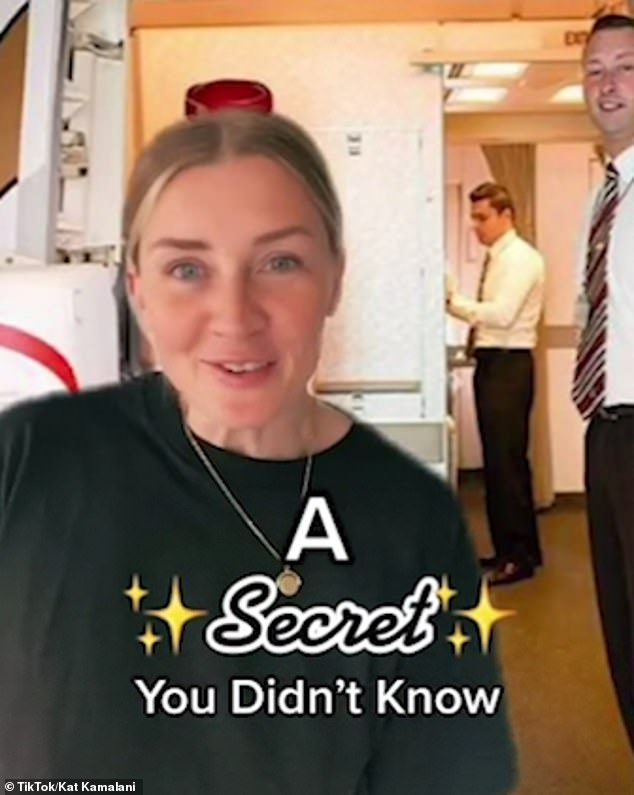 Kat Kamalani, from Salt Lake City, Utah, took to TikTok to reveal the secrets of her job, including why flight attendants ‘look you up and down’ as soon as you board an airplane

‘Well, I’m about to tell you what we’re really doing.

‘So when you’re walking on the airplane and you see our happy, smiling face, we are actually looking you up and down and we are trying to find our ABPs, and what that is called is our able-bodied people or person.

‘So this is people who are going to help us in an emergency.

‘For example, people like this military personnel, firefighters, nurses, doctors, so in case of an emergency like a medical emergency or we are going to land the plane or there’s a security breach. We know who’s on our plane and who can help us.’

But Kat went on to explain that flight attendants are also keeping an eye out for any suspicious items or human trafficking, which she claimed happens ‘a lot’ in the aviation industry.

She added: ‘But, we are also looking at one more thing. We’re looking for things that don’t quite belong on the plane, like a box full of liquid on the side.

‘We’re looking for human trafficking, it happens a lot in the industry and our passenger safety is our number one priority. So we’re just looking for things that look off.’ 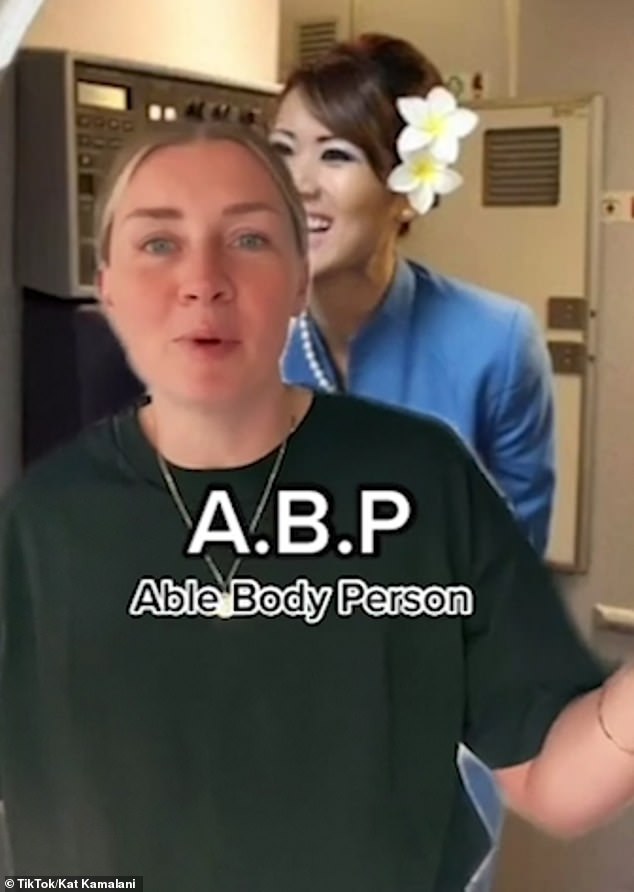 In a video, she said staff greet you at the door to find ‘able-bodied people’, meaning people such as doctors or nurses who are able to assist flight attendants in case of an emergency

Other TikTok users were left gobsmacked by her revelation, with many saying they had absolutely no idea that this was what flight attendants were doing when they greet you on an airplane.

One woman commented: ‘Wow… I had no idea. I’m the lady that’s just trying to get quietly and politely drunk!’

A second quipped: ‘I caught one looking me up and down and thought she disapproved of my Adidas bottoms and comfy top for flying’

While a third wrote: ‘So that’s another reason to board military first… y’all are identifying us!’

And a fourth asked: ‘What if the ABP doesn’t wanna help?’

Another penned: ‘I will now think of this every time I board a plane’

While other people were quick to question how flight attendants would be able to tell what someone’s profession was by looking at them.

One person asked: ‘I’m a doctor… but how would you know that by looking at me?’

And another said: ‘What does a doctor look like?’

A third wrote: ‘Wait, how can you tell what they do as a living just by looking at them? I rarely wear my stethoscope as jewellery.’