The Fishmongers’ Hall attacker fooled a counter-terrorism chief when he was asked why he was wearing a bulky coat while sitting inside, an inquest jury has heard.

Khan had a brief conversation with Steve Machin, governor of counter-terrorism at HMP Whitemoor, during the prisoner education event in central London on November 29, 2019.

Mr Machin said he asked Khan why he was wearing the extra large coat, which he seldom removed, but said jihadi’s answer about dressing for the weather was ‘plausible’.

Mr Machin told the jurors he couldn’t see all ex-offenders as a potential threat. 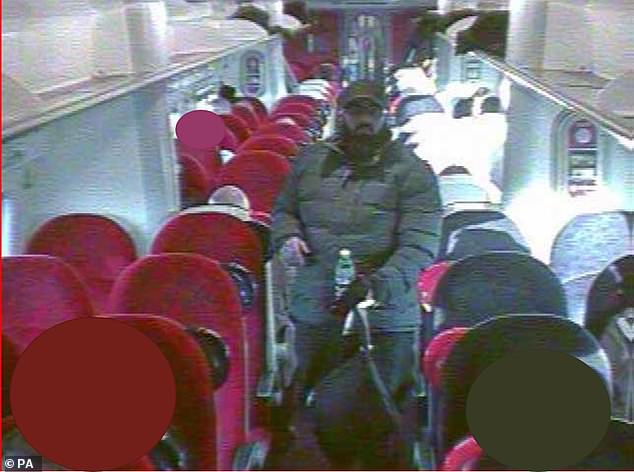 Terrorist Usman Khan, 28, wore the black jacket (pictured on a train to London on the day of the attack) to hide his fake suicide vest on the day he fatally stabbed Cambridge graduates Jack Merritt, 25, and Saskia Jones, 23

He added: ‘I couldn’t live my life expecting every encounter with the community or ex-offenders is going to lead to devastation, I couldn’t live with that level of paranoia.’

On Wednesday, Mr Machin said Khan, from Stafford, tried to give him a hug when the pair met, telling him: ‘I have learnt that violence isn’t the path.’

But inquest jurors at City of London’s Guildhall heard Khan had spent the previous week buying items needed for his murderous plans, including the black coat he wore to the event to disguise his fake suicide vest.

On Thursday, Nick Armstrong, representing the family of Ms Jones who was a guest at the event, asked: ‘Why don’t you pick up the fact he’s wearing the coat?’

Mr Machin replied: ‘He provided a backstory and it sort of made sense. I could see below the coat was a base layer.

‘He said when he checked the weather he was expecting a cold day. He said: “I don’t want this being my outer top”.’

Being able to have his own accommodation, after a spell in a probation hostel, and hearing that he would not be escorted by police to the event led him to think that Khan ‘must have continued on the path he had taken’.

Mr Armstrong accused Mr Machin of dropping his guard despite being faced with warning signs about Khan’s presentation. 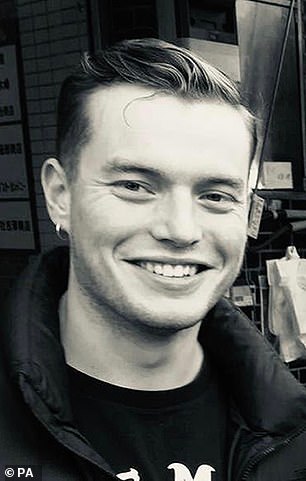 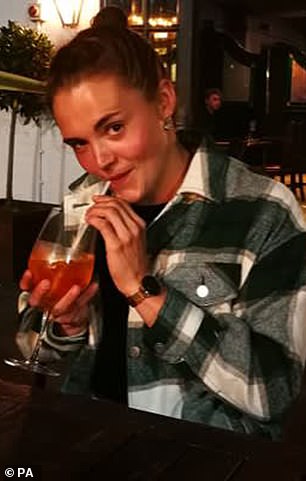 Khan had a brief conversation with Steve Machin, governor of counter-terrorism at HMP Whitemoor, during the prisoner education event in central London on November 29, 2019. Pictured, victims Mr Merritt (left), 25, and Miss Jones (right), 23

Mr Machin said: ‘I’m not in the same headspace as when I’m at work – I wasn’t there as a counter-terrorism governor, I was there as operational manager of HMP Whitemoor.

‘My head space would have been completely different.’

Mr Machin rejected Mr Armstrong’s suggestion that Khan being an example of a ‘good news story’ for rehabilitation had effectively ‘blunt his antennae’ of concern.

‘I saw him being involved (with Learning Together) as good, it hadn’t got to the point of a good news story.’

Mr Armstrong replied: ‘The problem with a good news story is they’re not always true.’

The inquest jury heard evidence from an event at Whitemoor prison, to which Khan as an ex-offender was invited, at which further evidence later emerged that Khan was planning an attack. Mr Machin rejected Mr Armstrong’s suggestion that Khan being an example of a ‘good news story’ for rehabilitation had effectively ‘blunt his antennae’ of concern. Pictured, a bag belonging to Khan

Mr Armstrong said: ‘Khan told some of the prisoners he was going to do something. Are you aware of this?’

Mr Machin said he did an intelligence search but there was no similar evidence to corroborate this.

Mr Armstrong pressed Mr Machin on why intelligence about Khan – which inquest jurors previously heard suggested he was seeking ‘a return to his old ways’ – was not shared with Learning Together.

Mr Machin replied: ‘One thing I will be taking back to work will be briefing non-intelligence agencies, what we can and can’t share.’

‘This looks like a way of doing that. You don’t ring up and say: just watch him.’

Learning Together co-founders previous rejected the suggestion that Khan was a ‘posterboy’ for them. 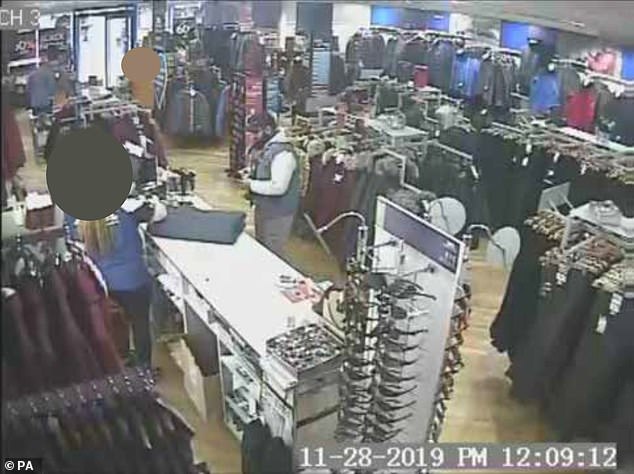 The inquest jury previously saw images of Khan wearing the coat – bought the day before, in a size larger than he would normally wear – at the Learning Together event. Pictured, the day he bought the coat

Georgina Butler, head of learning and skills at Whitemoor jail, was sitting with Mr Machin, Khan and Ms Jones at the Learning Together event at Fishmongers’ Hall.

She told jurors she felt ‘flustered and warm’ because she had got lost and was late to the event so took her jacket off and flapped her blouse to cool down.

Ms Butler said she had asked after Khan’s family and found him ‘fairly chatty’ but thought the fact he was wearing a bulky jacket was ‘a bit peculiar’.

She said: ‘I remember seeing Usman in a puffer jacket and thinking it a bit peculiar.

‘Obviously a lot more comes to light when you reflect afterwards. I remember seeing a base layer top. I remember thinking he wore the wrong clothes, it looked too tight.’

The inquest jury previously saw images of Khan wearing the coat – bought the day before, in a size larger than he would normally wear – at the Learning Together event.

He took it off once, but wrapped it around his waist to further conceal the fake suicide belt, the court heard.

Jo Boulton, Usman Khan’s offender supervision officer at HMP Whitemoor, told the inquests how Khan wanted to air some grievances of the limitations of being a category A, high-risk offender in January 2017.

She said: ‘He was very upset because he couldn’t call his mum without pre-booking it. I believe at Whitemoor you had to pre-book a week in advance.’

Khan killed two and injured three others before being chased and disarmed on nearby London Bridge by three men armed with a fire extinguisher and a narwhal tusk.

He was then killed by police.