It was almost like Bayern Munich had not done their homework. Kylian Mbappe, it really might be worth marking him.

He tore Barcelona apart in the last round, a stunning hat-trick that put Europe on alert, and here again he netted twice to take him past Thierry Henry’s goal record in the knockout stages. How fortunate Mauricio Pochettino is to have the Frenchman spearheading his attack.

‘This is a superb team performance,’ Mbappe said. ‘I was able to profit from everyone else’s work. We are only at half-time in this huge clash. We will attack the second the leg with the same determination.’ 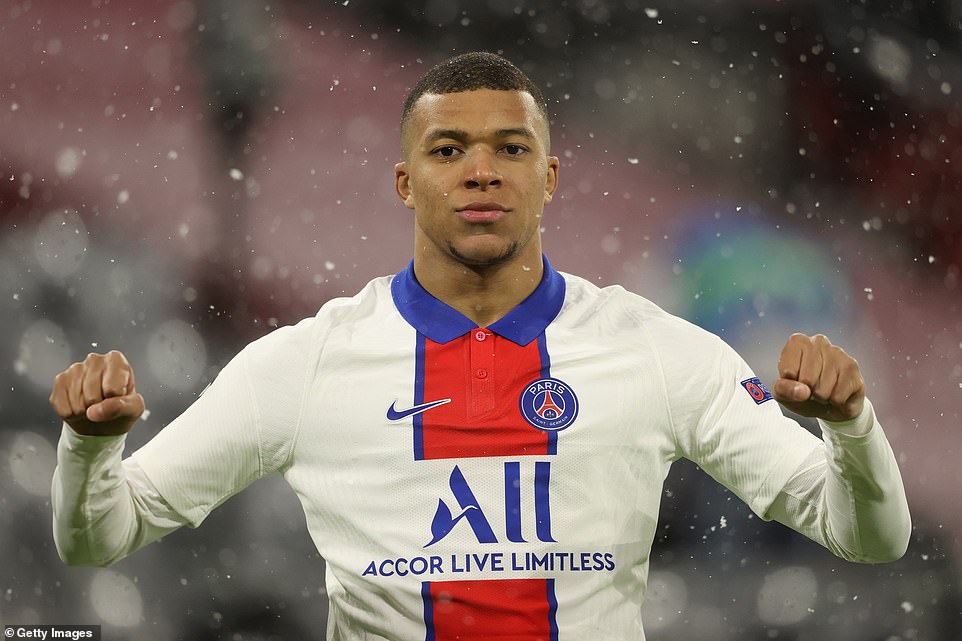 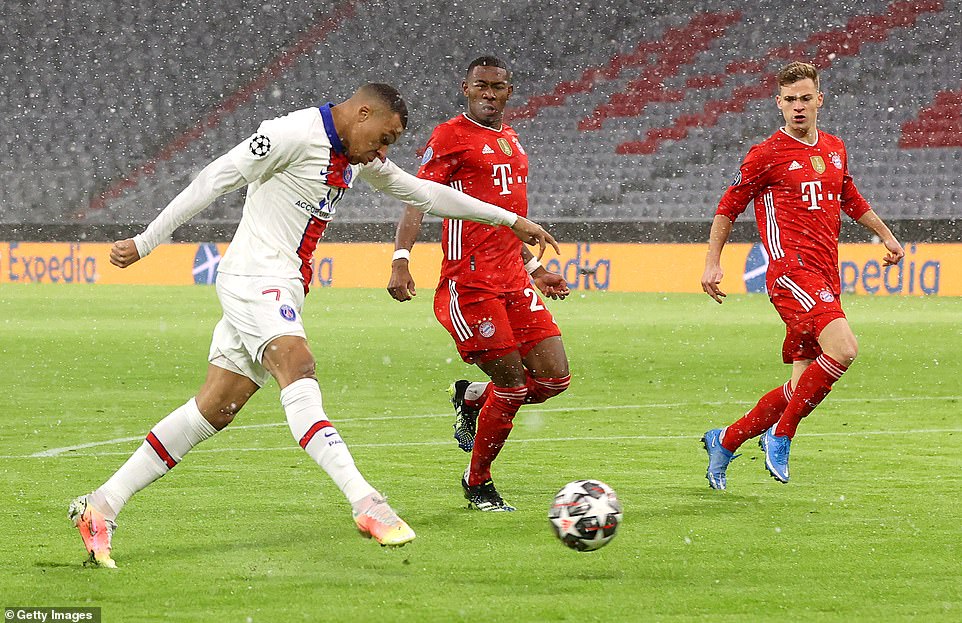 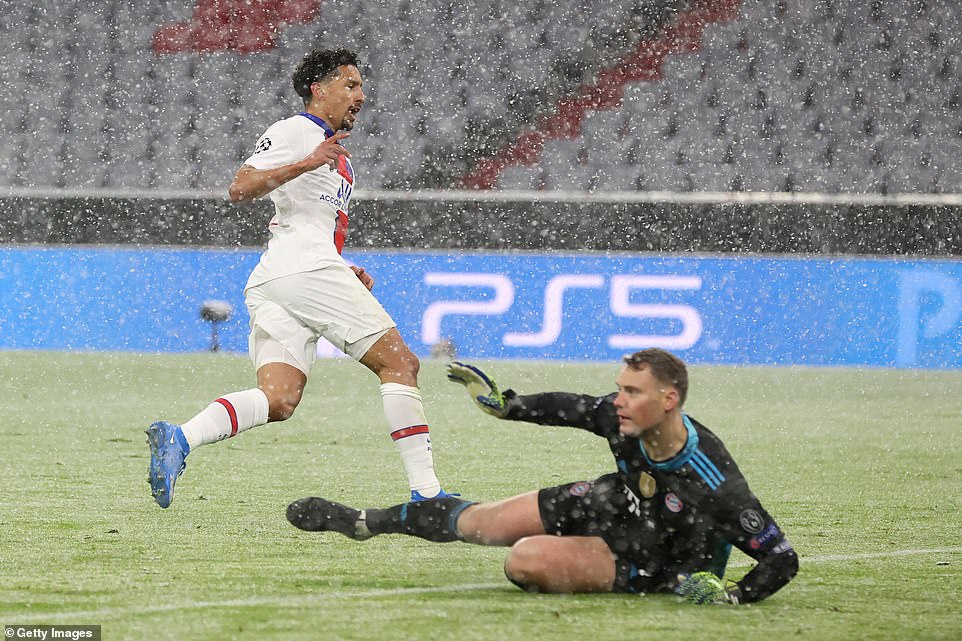 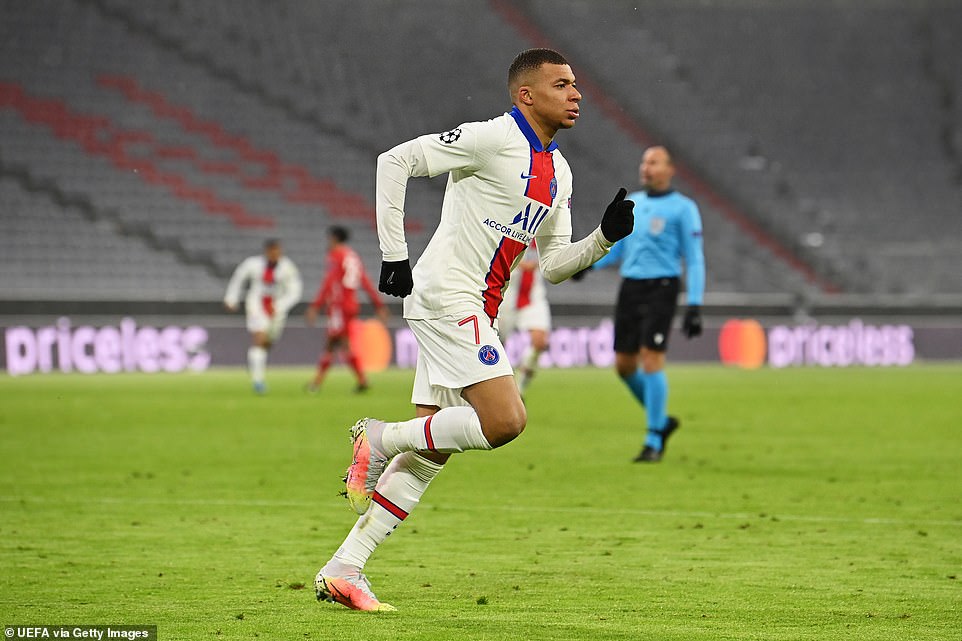 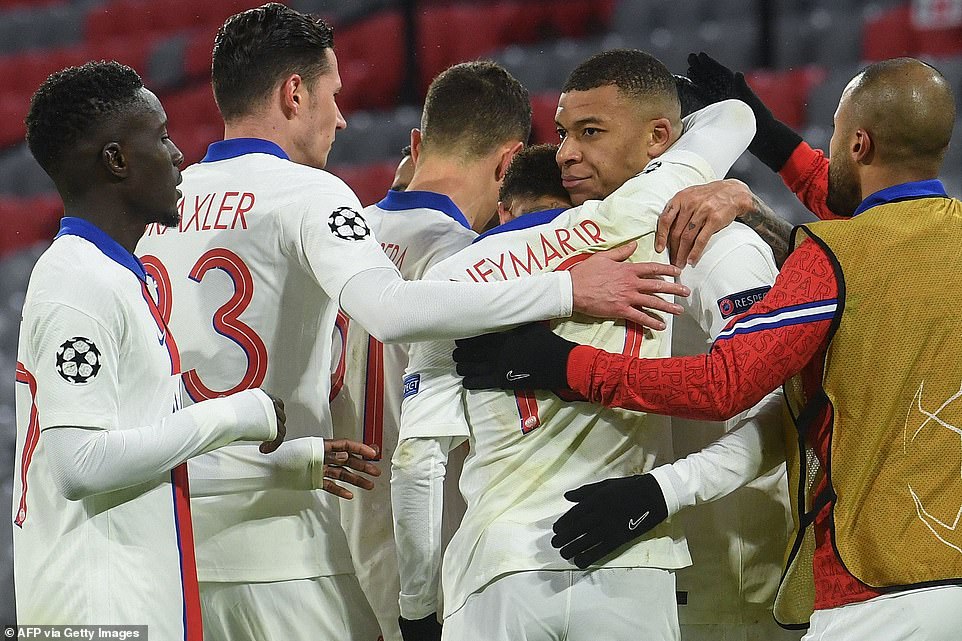 And then there is Neymar, a player who was pained to remind people just how much he wants to win. Without question, he made his point here.

‘People don’t understand how obsessed I am with winning,’ read the gaudy tattoo on his right thigh.

A motivational quote for him to admire, perhaps. A warning to Bayern’s defence could also now ring true.

The ‘people’ he referred to also didn’t need the reminder. His tears when these sides last met in the final, 227 days ago, as he begrudgingly went up to get his runners’ up medal said it all.

Even two Bayern headers couldn’t take the gloss off a sublime display. In many ways this had the momentum of a basketball game. It made for a fabulous watch.

A lot has changed in 227 days. Thomas Tuchel, PSG’s boss then, is at Chelsea. Eric Maxim Choupo-Moting, who scored Bayern’s first, left PSG and there was no Robert Lewandowski to scare the life out of the Parisian backline.

Neymar was criticised for not turning up when it mattered most last season. He made sure when the lights went out in Bavaria nobody would be pointing the finger of blame in his direction.

His impact took just 148 seconds, driving through Bayern’s defence before having the finesse to weight a ball perfectly for Mbappe to make it 1-0.

The strike was far from the 22-year-old’s best but even then it couldn’t be kept out. Manuel Neuer gambled in diving low to his right and lost. Bayern were stunned.

There was an air of relaxation among the German press going into this game which felt odd with Lewandowski watching from his sofa.

They hadn’t lost at home since November 2019. For a Champions League defeat you have to go back to March of that same year, that time Liverpool were the victors. If arrogance was in the air there felt good reason.

But when Neymar clipped a ball over the top of a Bayern defence at sea following the breakdown of a set-piece it was as if time froze.

There was Marquinhos, no-one around him, controlling with aplomb before firing past a helpless Neuer. 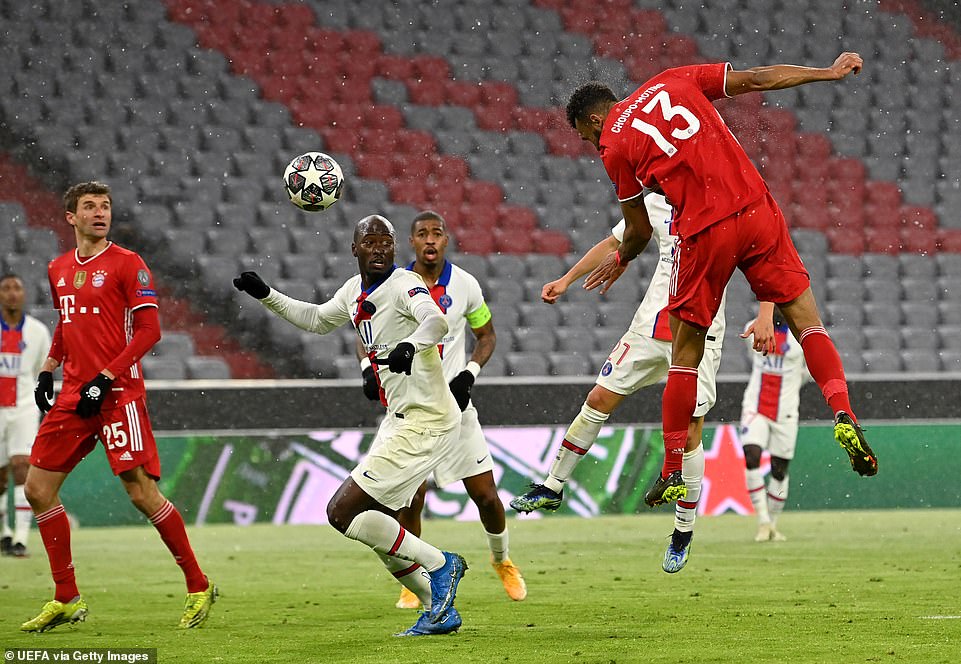 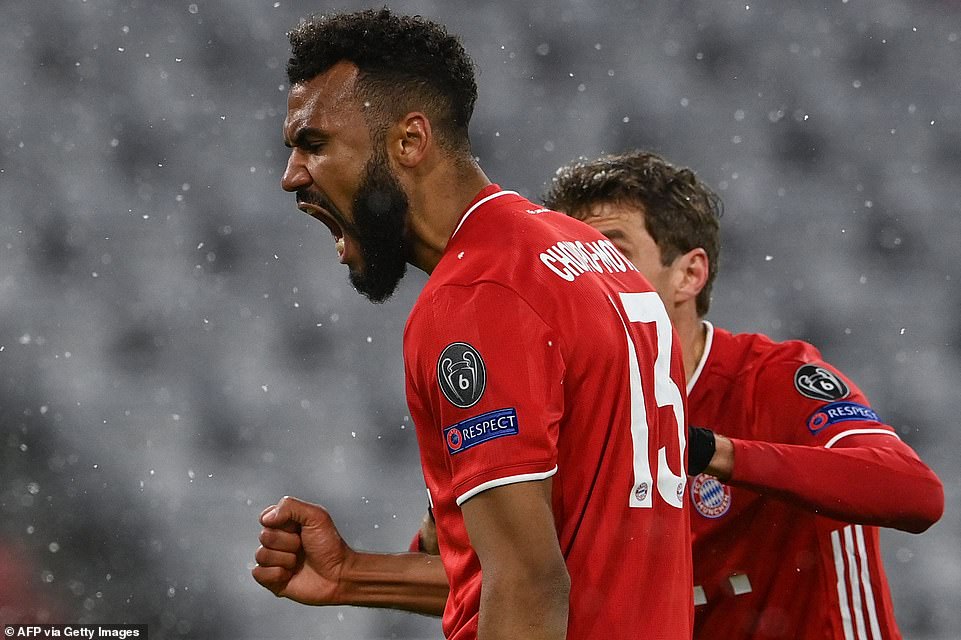 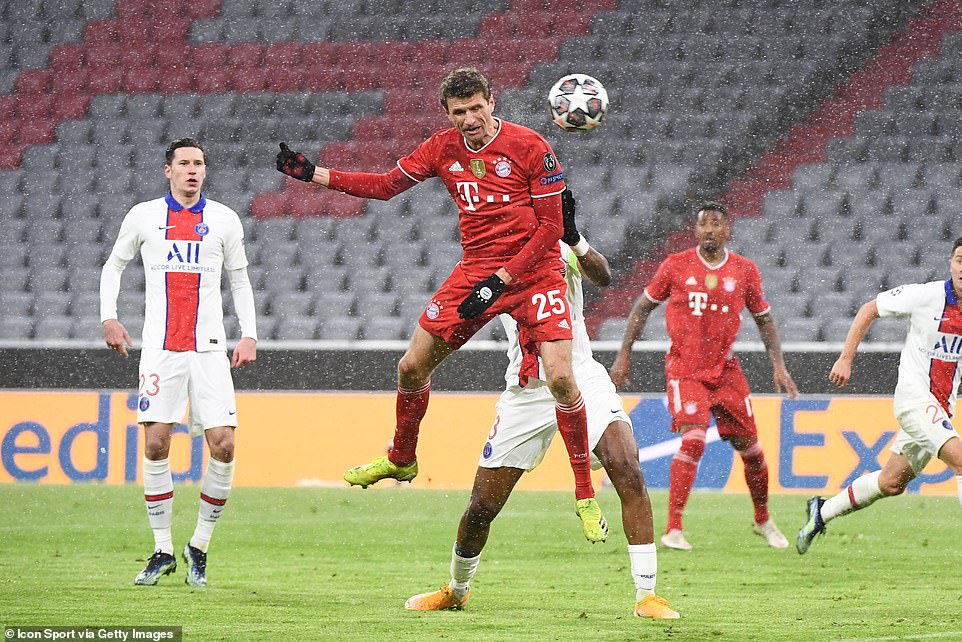 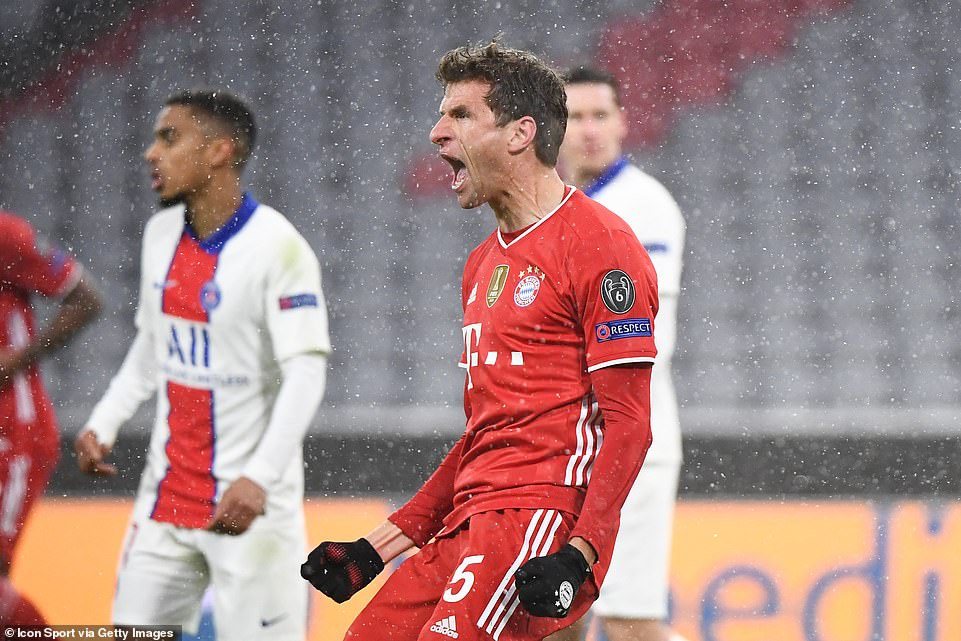 Two shots for the visitors and two goals. The memories of Barcelona quickly came flooding back. In the end it was six shots, five on target in PSG’s favour.

Bayern huffed and puffed, 31 shots to finish, 12 of which on target at Keylor Navas and only two breached him. How they missed Lewandowski.

Bayern had to respond and Hansi Flick did so, hauling off Leon Goretzka for the pace and power of Alphonso Davies.

The impact was instant and freed up Benjamin Pavard on the other wing to give Bayern a lifeline, his cross finding the head of Choupo-Moting.

It took Flick time to piece it all together but Jerome Boateng was next, on for Niklas Sule, and Bayern soon found a rhythm. Thomas Muller, who missed a huge chance early, nodding in Bayern’s second. 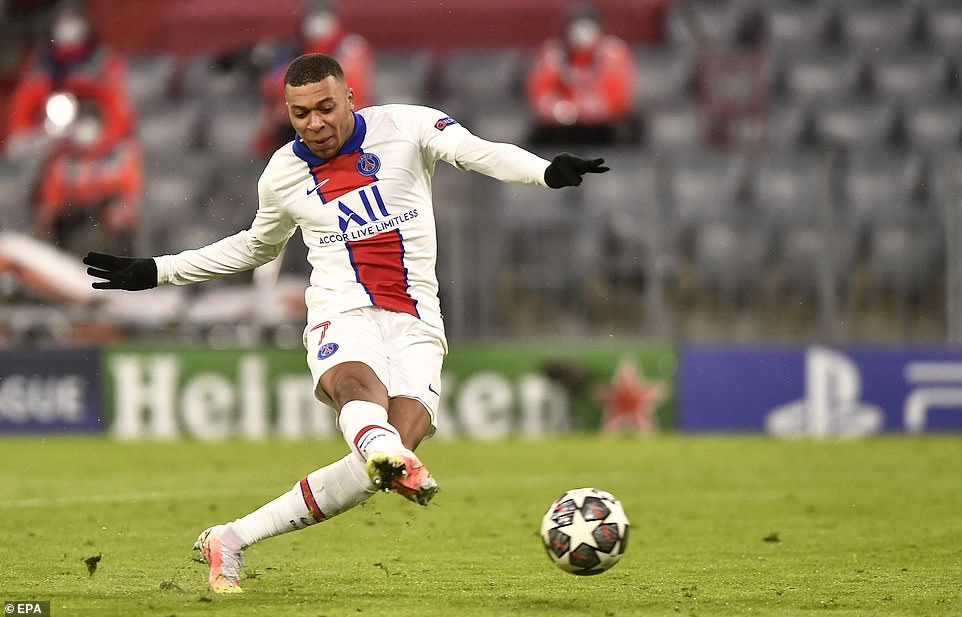 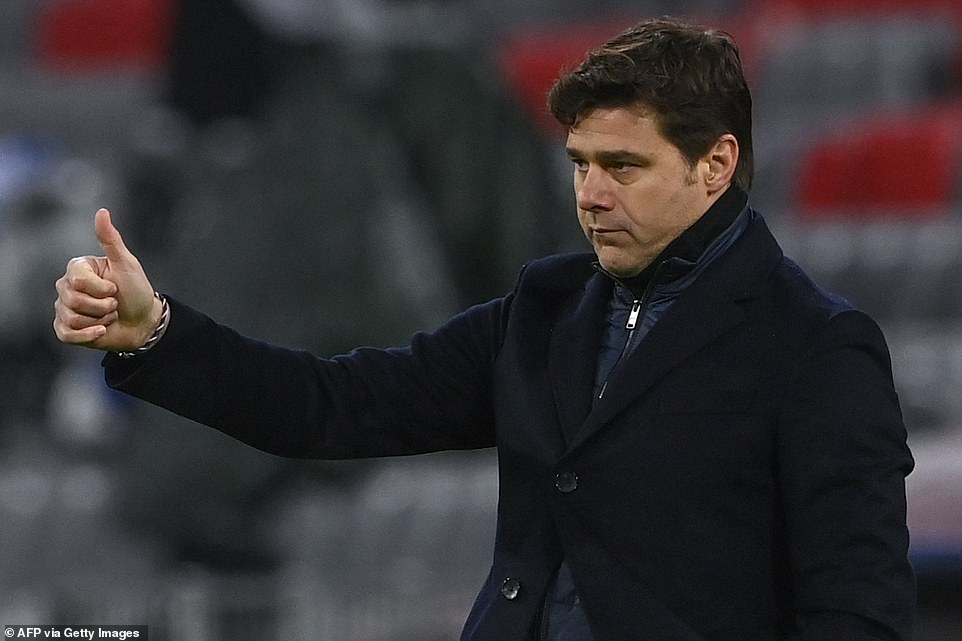 ‘We have to score more goals,’ said Muller. ‘We can talk about goals conceded, but if this finishes 5-3, 6-3 then no one could complain.

‘If we had the killer instinct today, that we have often shown, then you would have seen another game.’

For Bayern’s sake, they’ll hope things are far different a week from now at the Parc des Princes.

RE-LIVE ALL THE ACTION