Not long after Mikel Arteta was dashing his bottle of water to the ground in frustration, Slavia Prague’s players and staff were cavorting on the pitch a fair while after the final whistle, high-fiving, back-slapping and shouting into the TV camera in celebration.

That stark contrast in emotions is the big difference that Tomas Holes’ injury time equaliser made to this quarter-final tie.

With one dash to the far post and diving header, the Slavia Prague defender snatched the first leg advantage away from Arsenal and ensured it would be heading back to the Czech capital with the visitors courtesy of a crucial away goal. 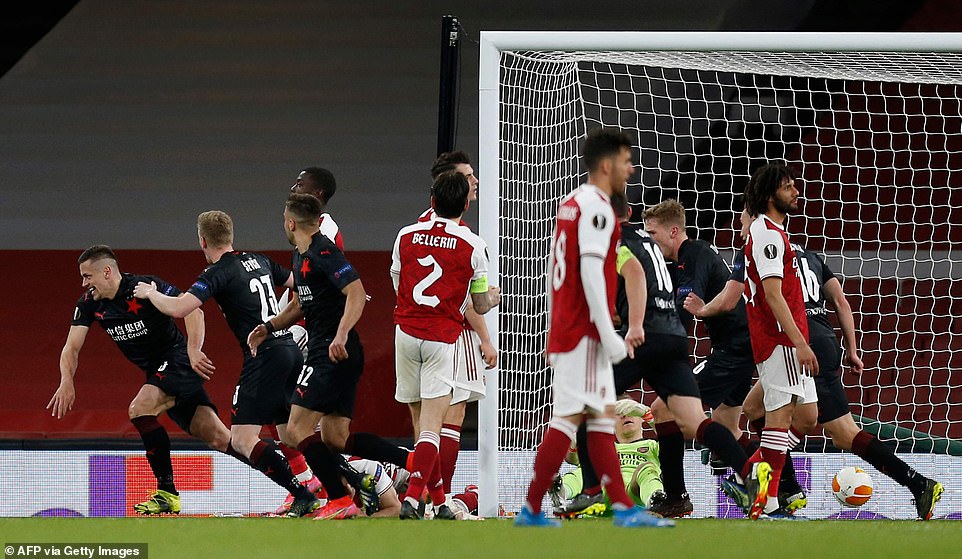 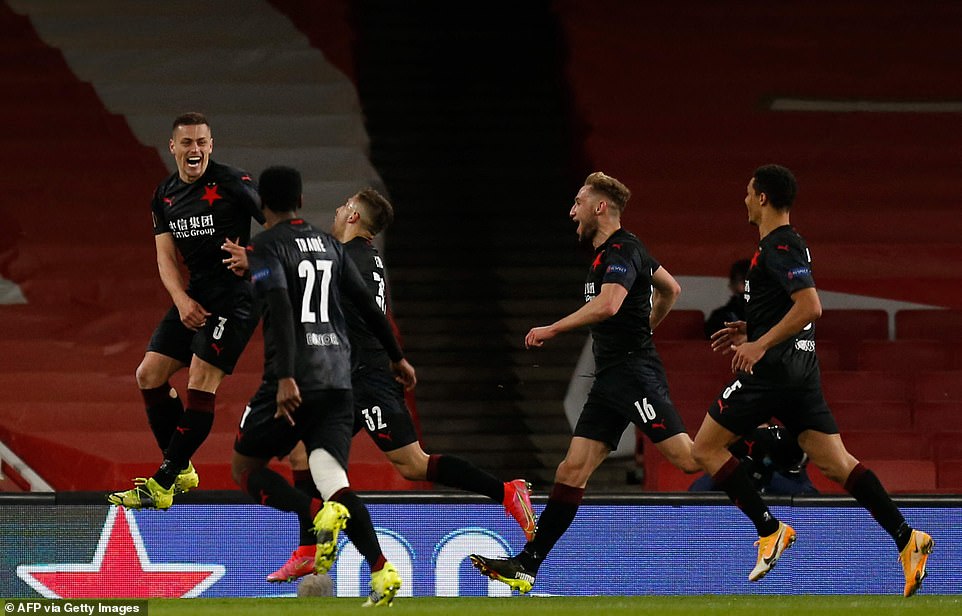 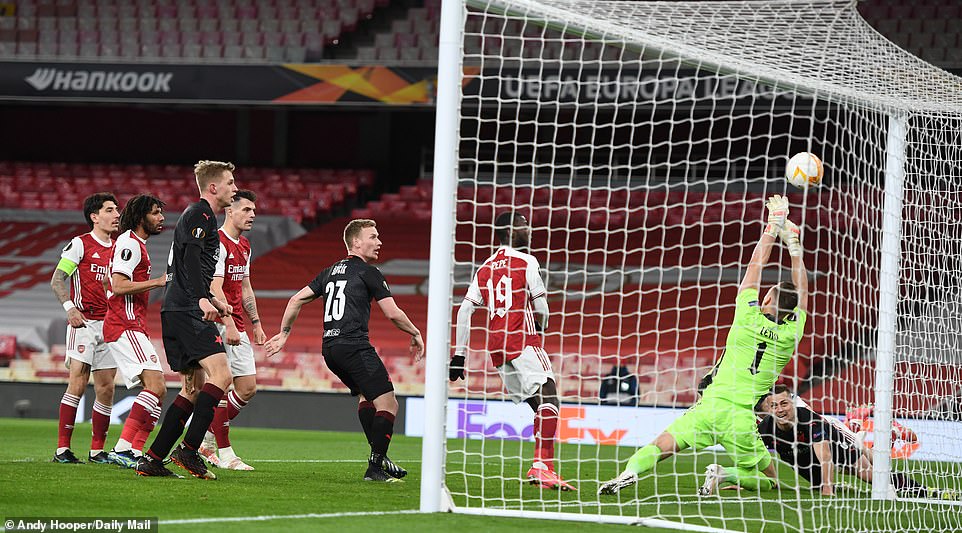 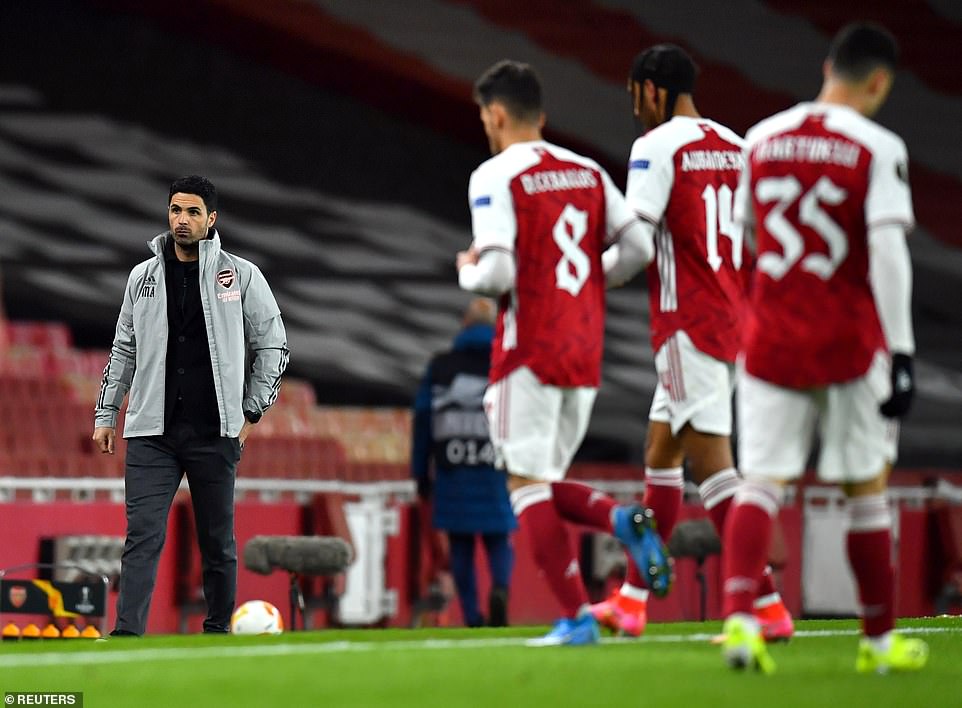 It turned into a sour night for Mikel Arteta and his Arsenal side, who have it all to do to reach the Europa League semi-finals 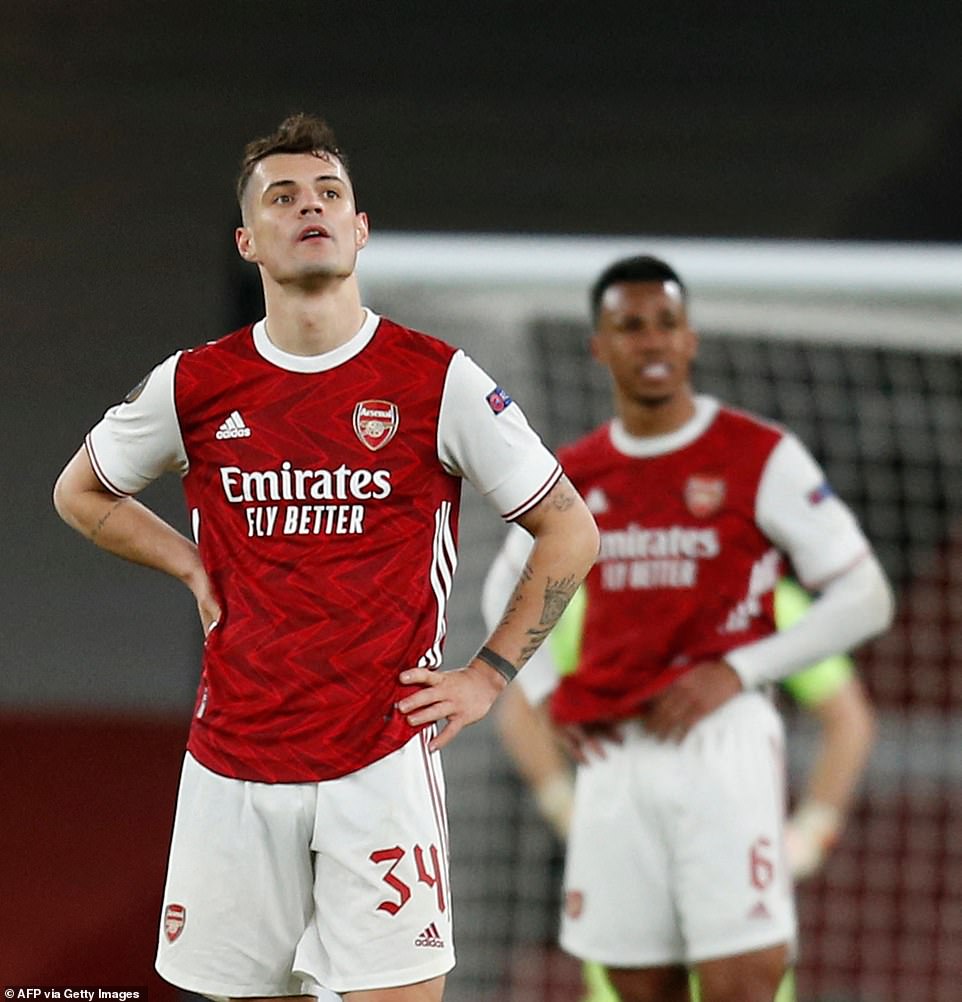 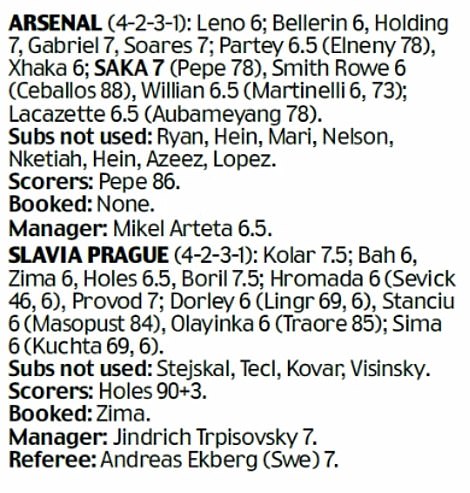 Arteta’s fury was understandable, especially after seeing his side miss a string of earlier chances to rack up a considerable lead to take into next week’s return.

All his players had to do once they had edged ahead was hold onto Nicolas Pepe’s late goal for a little while longer.

The winger had only scored in the 86th minute so it was not the biggest of asks.

But nothing is straightforward with Arsenal and, now, neither will the task of reaching the semi-finals be.

Nobody has beaten Slavia Prague at home this season. They have been held to draws just four times and the only two in which their opponents have scored have ended 1-1.

That scoreline would only be good enough to force for extra-time in next week’s second leg. Another nervous Europa League night awaits Arteta and his men.

Arteta’s team selection will need to be spot on in the return and he had no regrets about the calls he made for the first leg, including the biggest one of benching his captain Pierre-Emerick Aubameyang despite the size of the occasion and growing importance of this competition to Arsenal’s season.

‘It was a big decision to leave some of the players out but we played the best team to start the game and still have some key players to come on and have an impact later on.’

Indeed, it was the late introductions off the bench of Pepe and Aubameyang that helped finally give Arsenal the cutting edge required to break Slavia Prague down. 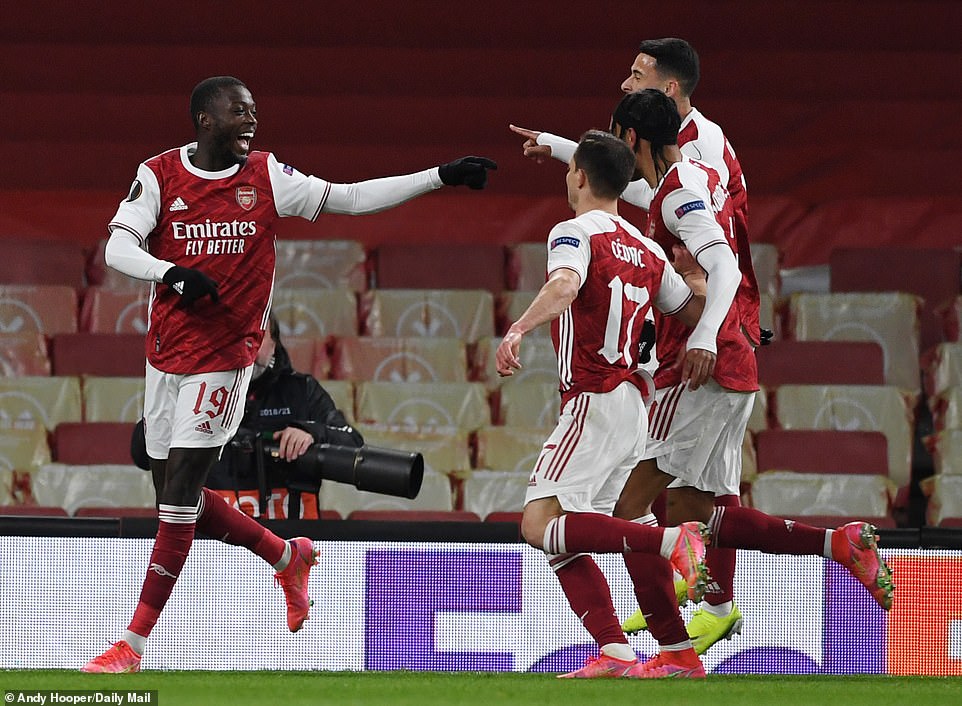 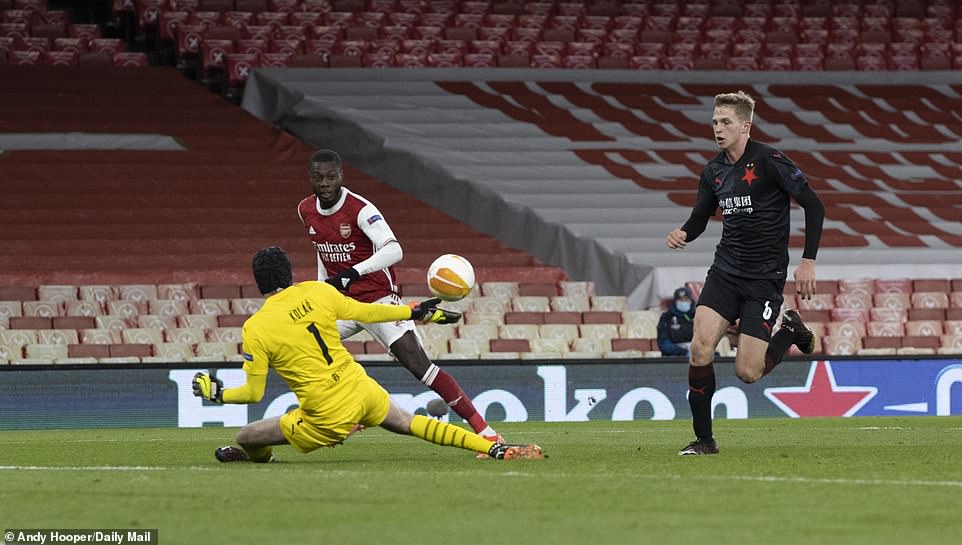 Pierre-Emerick Aubameyang released winger Pepe, who raced into the box before producing a composed finish 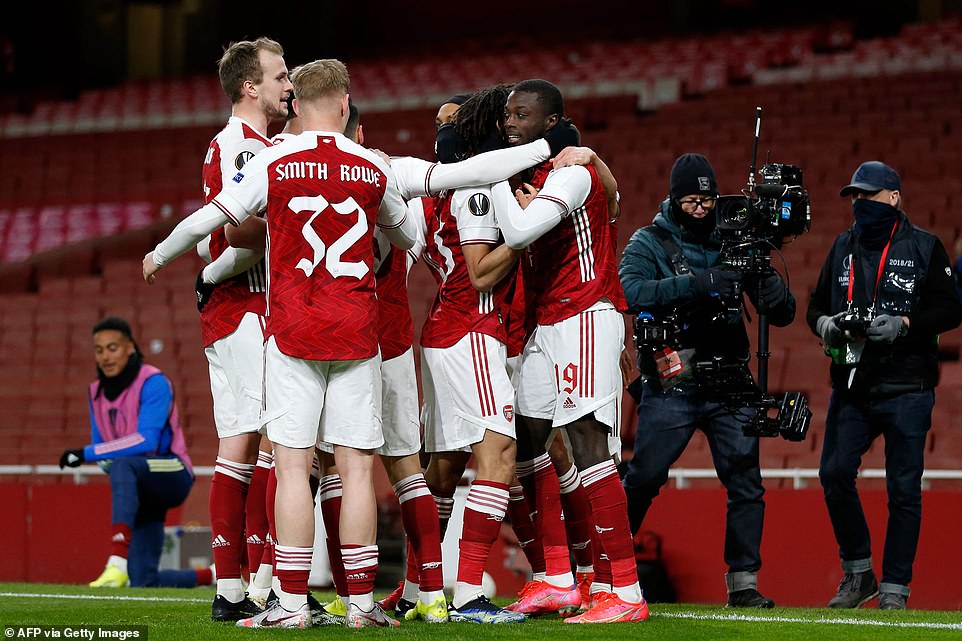 Still, though, it was not enough.

Arteta said: ‘Psychologically to go there with 1-0 is completely different to going there with 1-1. Now we know we have to go there and win the game and score goals and we cannot play any games.

‘We have to go there with determination to be an attacking team and hurt them. I totally believe we can go there and win the game or I wouldn’t be sitting here.’

Though they could have made their second-leg task a little easier.

‘When you create big chances you have to score them. We made it more difficult,’ Arteta admitted.

‘We have to manage the game, the last four or five minutes, much better than we did.

The first-half was cagey, with few clear chances. 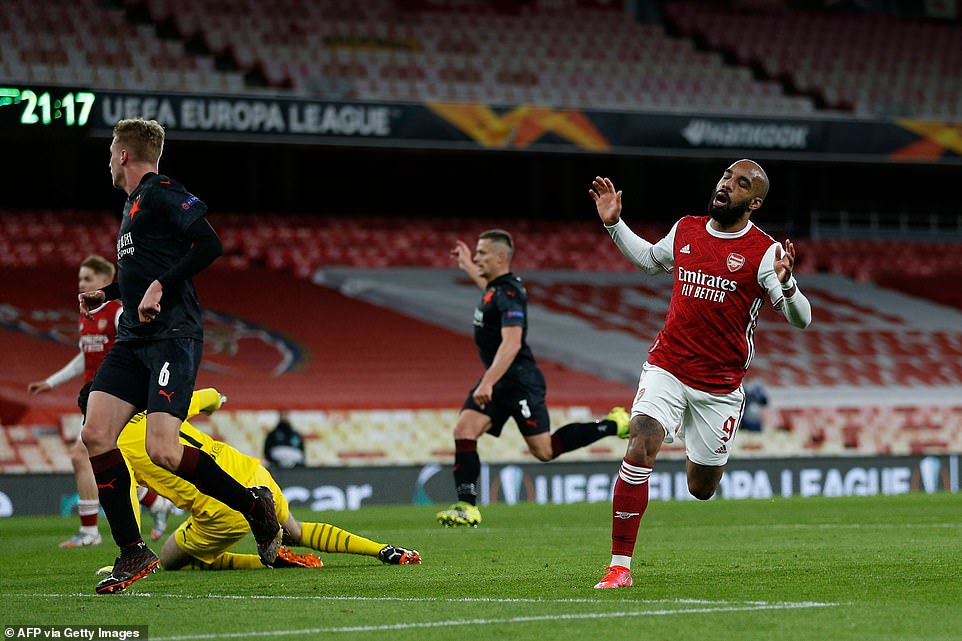 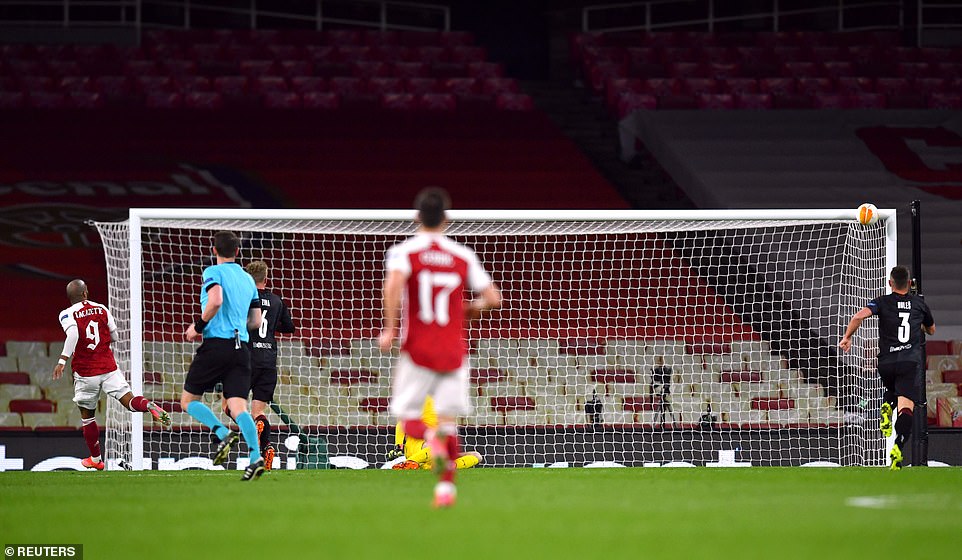 The Frenchman, with just the goalkeeper to beat, strikes the crossbar with the scoreline at 0-0 in the capital 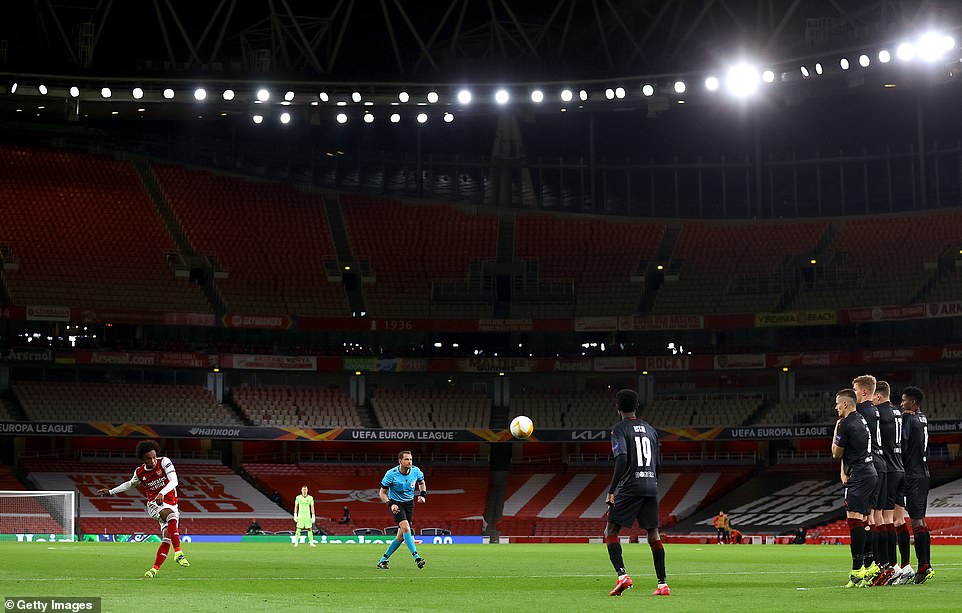 Slavia Prague have knocked Leicester and Rangers out of this competition and are impressively unbeaten 25 games into their domestic league.

They played with a confidence befitting a side who had enjoyed the run they had at home and in the Europa League, defending well, not afraid to play keep ball in their own territory or throw bodies forward, both to attack and pin Arsenal back.

They restricted Arsenal to a couple of first-half opportunities, one curled wide by Bukayo Saka and a Rob Holding header tipped over by their goalkeeper Ondrej Kolar.

The closest the visitors came was when their best player Lukas Provod fired over Bernd Leno’s bar from long range early on.

Arsenal improved after the break. Willian hit the post from a free-kick won by Saka after he was tripped just outside the box by David Zima though Slavia Prague’s captain Jan Boril fired in a warning shot back to remind Arsenal they were still in the game. Then came the chances Arsenal and Arteta were left to rue.

Alexandre Lacazette won the ball on halfway and had the whole of Slavia Prague’s half to run onto and plenty of time to make up his mind. 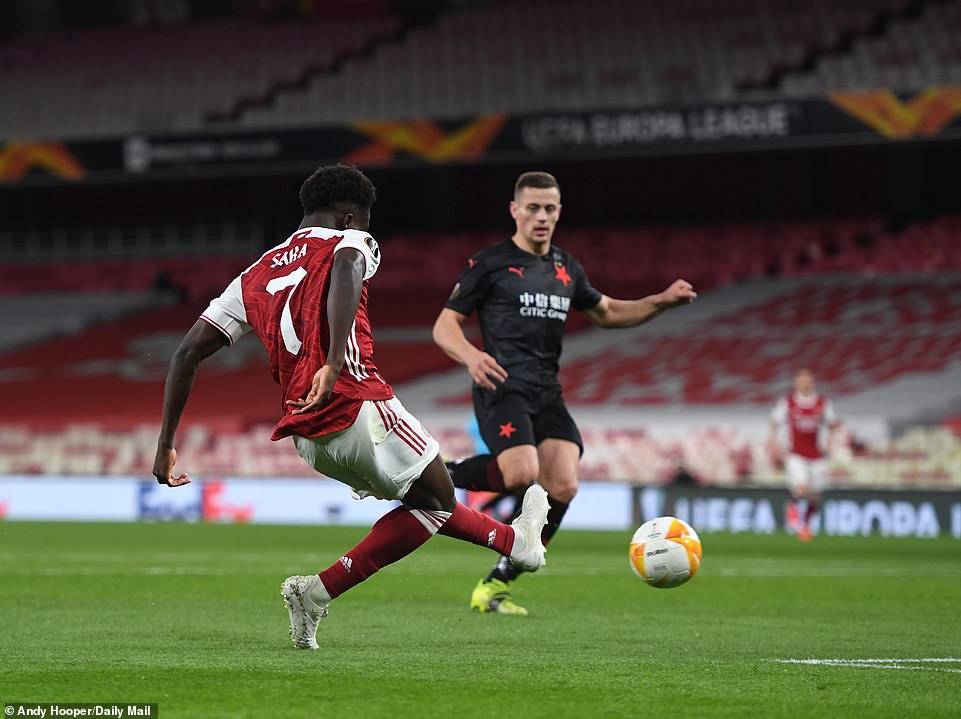 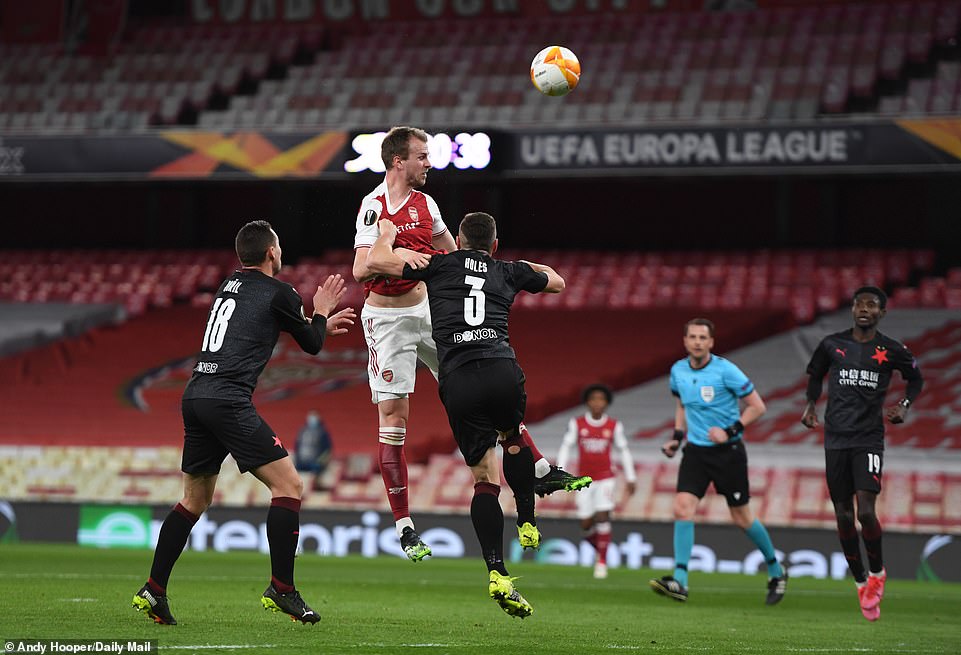 Arsenal defender Rob Holding went close with a header, which just sailed over the crossbar in the first-half

But when he got into shooting range, Lacazette’s finish was inches out, curling the ball against the bar rather than into the top corner with Smith Rowe then beaten to the rebound.

Saka’s fizzing cross was then just too powerfully hit for the Frenchman to convert.

Perhaps with Slavia Prague’s home record in mind and the need to grab at least one goal Arteta threw on the attacking cavalry, introducing Gabriel Martinelli, then Pepe and Aubameyang.

Aubameyang failed to convert Smith Rowe’s cross with his first major involvement but then played a key role in what looked to be the winner, controlling the ball on halfway and then releasing Pepe to beat Kolar with a delicate chi that crawled over the line.

But, after Leno appeared to preserve Arsenal’s slender advantage by tipping Provod’s injury-time effort onto the post and behind, Arteta’s men could not successfully defend the resulting corner and allowed Holes to steal in at the back post ahead of Cedric Soares to score and spark wild Slavia Prague celebrations. 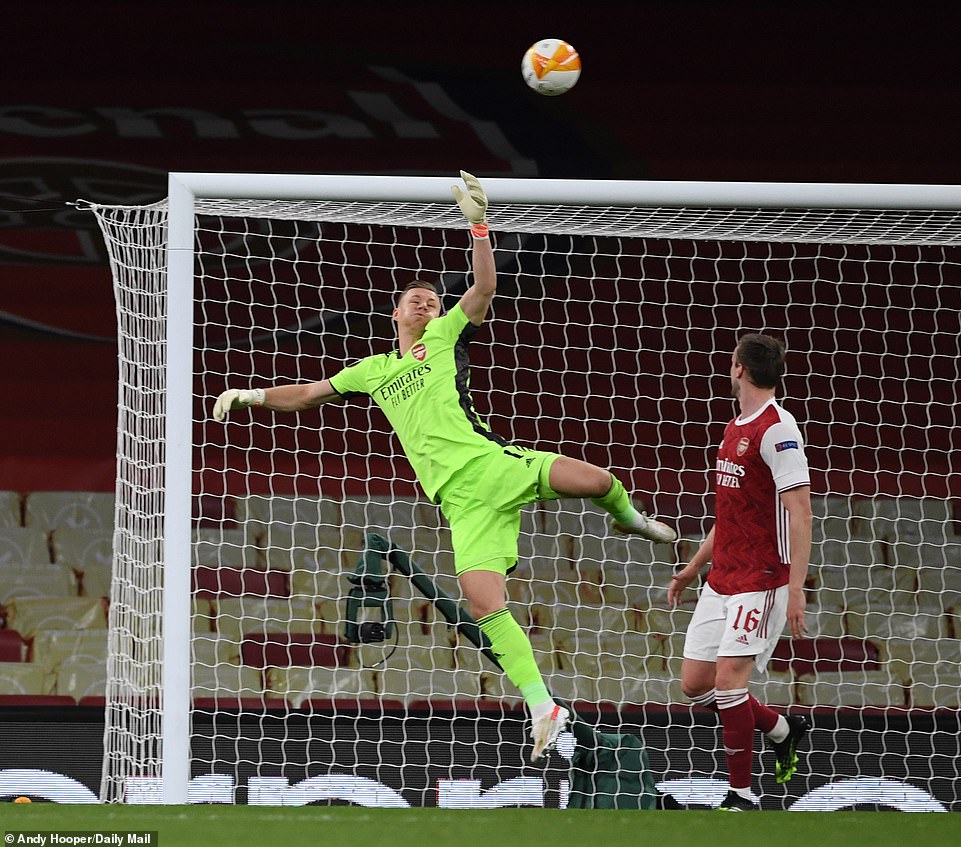 RELIVE ALL THE LIVE ACTION RIGHT BELOW…